Memorable cars from the movies

Sometimes, the car’s the star. Check out these cool cars from the big screen. 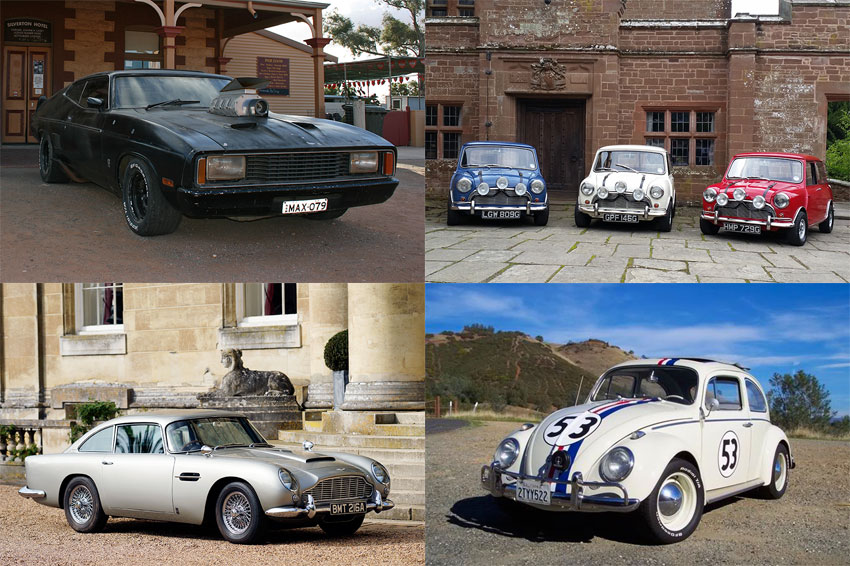 Film is often cited as a director’s medium with the person who calls the shots often given much of the credit for realising the creative vision. Of course, they would be nothing without the stars of the films – but we’re not talking about actors; movies are really all about the cars. So as Hollywood prepares to dole out awards in the festival of self-congratulation also known as the Oscars, we recognise the machines that brought the magic to the movies. 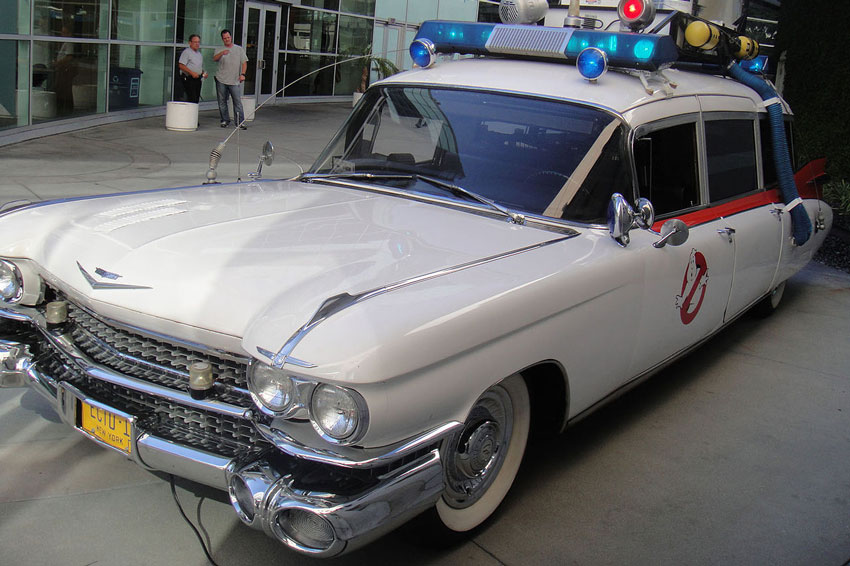 This modified Cadillac Miller-Meteor ambulance made its first appearance in Ghostbusters (1984) and acted as the creaky and quirky transportation for Ray, Peter, Winston and Egon as they travelled around New York City battling paranormal forces. Its origins as an ambulance/hearse gave it far better storage capabilities than a typical car, allowing it to easily carry four busters of ghosts along with their proton packs, traps, PKE meters and other assorted equipment. The car returned in Ghostbusters II in 1989, though this time reduced to taking the gang to perform at children’s parties. While another Cadillac Hearse served as the Ecto-1 in the 2016 Ghostbusters reboot, the original will hit the roads once again in 2020 in Ghostbusters III.

DMC DeLorean – Back to the Future 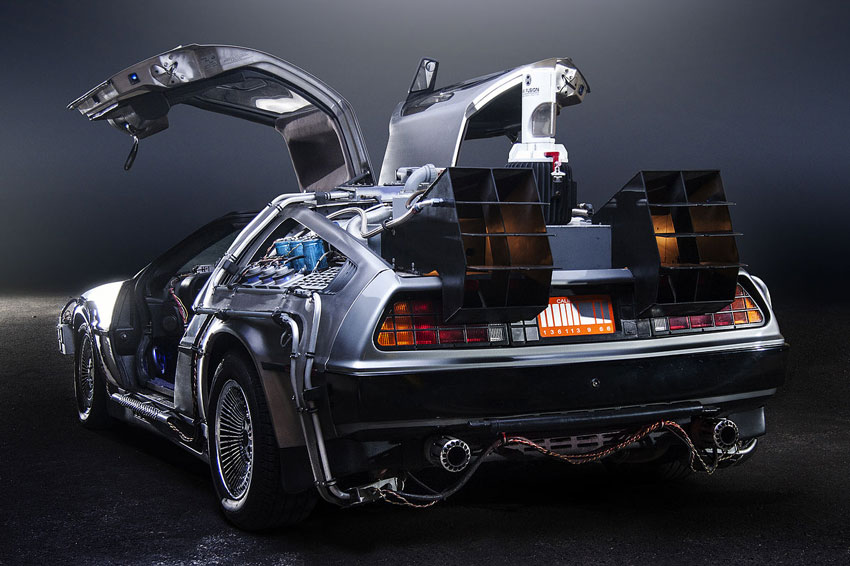 ‘The way I see it, if you're going to build a time machine into a car, why not do it with some style?’ – Doctor Emmett L Brown

Christopher Lloyd’s Doc Brown beamed as he unveiled his creation to his young friend Marty McFly in the opening act of Robert Zemeckis’ sci-fi comedy classic. And why not? The DMC is a work of design genius and the use of this futuristic, stainless-steel DeLorean is a vital part of the film’s iconography. Curiously enough, in early drafts of the script, the time machine was a fridge which might not have had quite the same cultural impact, even if they had managed to sign a bumper deal with SMEG. The DeLorean’s cool factor was massively increased after being given a hover conversion in the early 21st century. Sadly, that technology didn’t quite line up with reality and most of us have been left stuck in traffic jams on the ground. The DeLorean met its end in the final scenes of Back to the Future Part III when it was smashed to pieces by a freight train, breaking the hearts of geeks everywhere. But that was not the end. The car returned to the big screen in virtual form in 2018’s Ready Player One as the car of choice for protagonist Parzival in the pop culture-infused VR world. 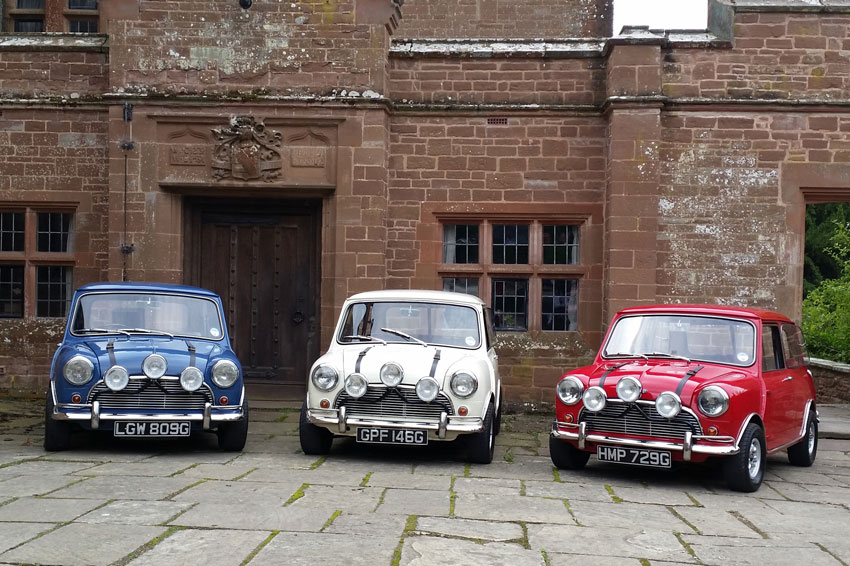 The red, white and blue trio of Minis used in the film appeared at the Motorsport at the Palace event in 2016.

With memorable visuals, an oddly catchy theme tune and an incredible set-piece involving MINI Coopers, this comedy caper has achieved immortality, with its most quotable lines ingrained into our collective consciousness. The film features plenty of pretty cars with a Lamborghini Miura, Jaguar E-Type and Aston Marin DB4 all making an appearance. But it’s the red, white and blue MINI Coopers that steal the show with their audacious getaway through the streets, shopping arcades, rooftops and sewers of Turin before being driven onto a moving bus. The less said about the 2003 American remake starring Mark Wahlberg, the better. 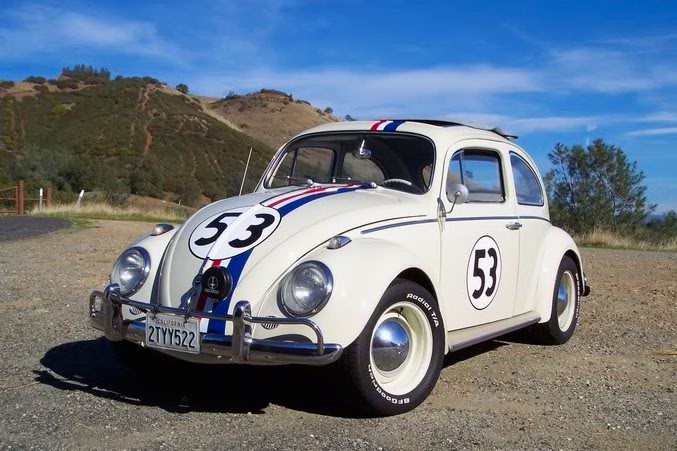 The Volkswagen Beetle will forever be associated with Herbie, the little car with a big heart that starred in a series of films from Disney, spanning five decades. The racing Beetle first appeared in The Love Bug (1969) as he helped a down-on-his-luck racing driver become an unlikely winner on the California racing circuit. With plenty of cool stunts and wholesome all-American values, sequels were inevitable and Herbie went on to race all around the world, taking part in competitions in locations as diverse Monte Carlo and Mexico. The most recent film in the franchise, 2005’s Herbie: Fully Loaded saw Disney poster girl Lindsay Lohan become the new owner of Herbie as she tried to make a name on the racing circuit. Herbie’s not the only film star bug, with the recent Transformers reboot Bumblebee featuring the titular robot disguising itself as a 1967 Beetle. Do these things never rust? 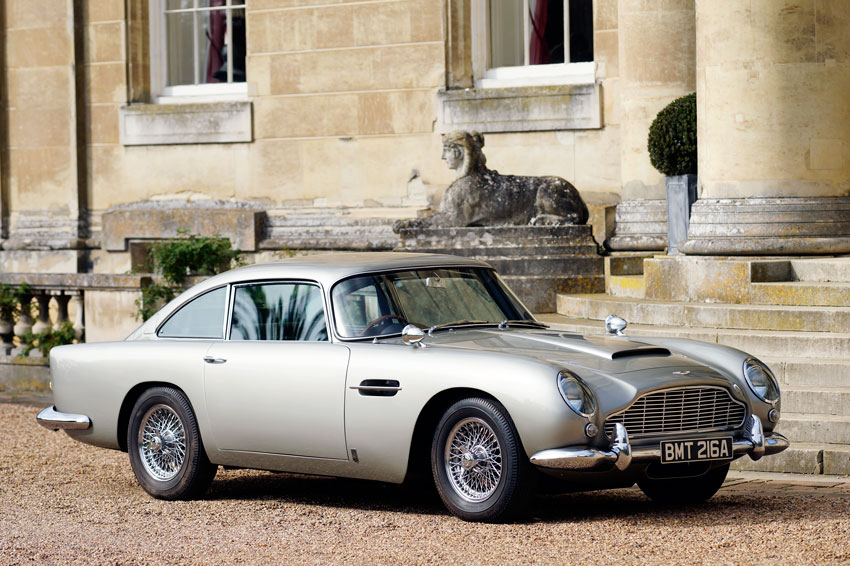 ‘You’ll be using this Aston Martin DB5 with modifications. Now pay attention please. Windscreen bulletproof, as are the side and the rear windows. Revolving number plates, naturally, valid all countries.’– Q (Goldfinger)

While Bond has driven a number of stylish cars throughout his many incarnations, it’s the stunning DB5 that sticks in the memory. It first appeared in the third Eon Bond production, Goldfinger, with all its features handily explained by gadget-master Q. Curiously, all his exposition from the smokescreen, machine guns, oil slick and ejector seat came up later in the film, which was handy. The car became a popular Corgi toy with children all over the world breaking the ejector seat button within five minutes of opening the box. The DB5 may be associated with Connery but other Bonds have had the chance to drive it, with Pierce Brosnan taking it for a spin in Goldeneye, and Daniel Craig winning it in a poker game in Casino Royale before getting behind the wheel in the nostalgic 50th anniversary film Skyfall in 2012. Bond drove off into the sunset with his one true love in Spectre, but you can’t keep a good spy down… or a good car. James Bond will return in 2020. 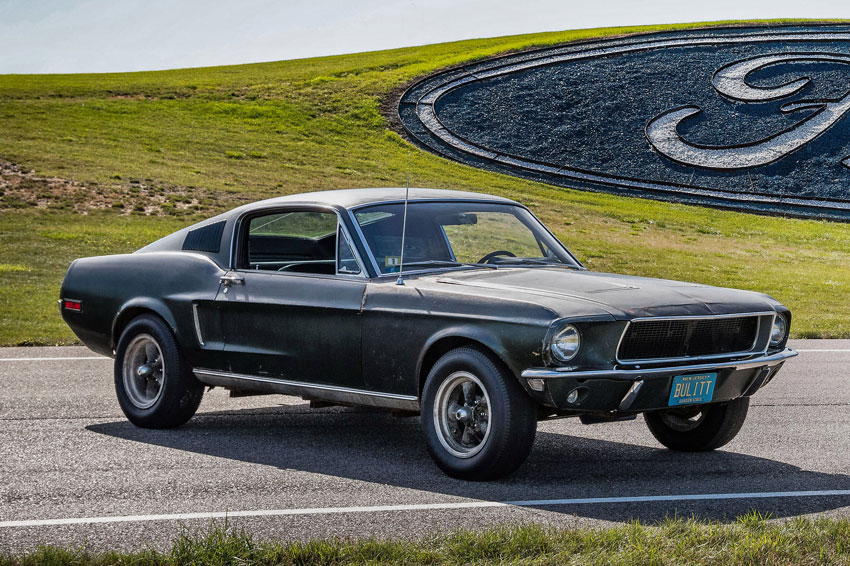 ‘Look, you work your side of the street, and I'll work mine.’ – Frank Bullitt (Bullitt)

Steve McQueen stars as the improbably named Lieutenant Frank Bullitt in this police action thriller. The film is probably most famous for its 11-minute car chase which weaves through the hilly streets of San Francisco. As the chase begins, the funky brass score fades away, leaving only the diegetic engine roars and squealing breaks. This, coupled with driver point-of-view shots and truly innovative (and Academy Award-winning) editing, helps to ratchet up the tension, while giving this extended sequence a grounding in reality. Ford lent two Mustangs to the production as part of a promotional agreement and the US motoring giant continues to use this sequence in promotional materials, with the Ford Mustang BULLITT released in 2018 to celebrate the legacy of this legendary film. 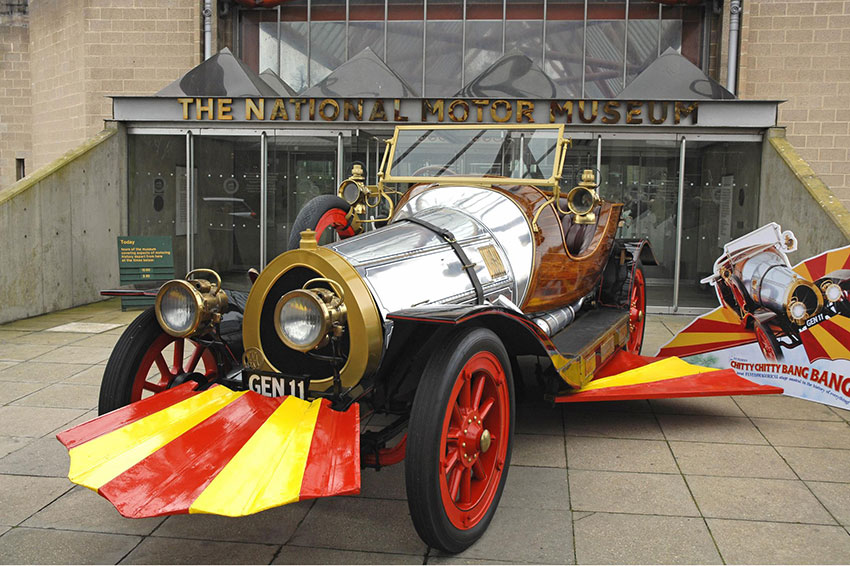 Chitty Chitty Bang Bang outside its home at the National Motor Museum, Beaulieu in 2018

This musical film featuring our fine four-fendered friend was based on the book Chitty-Chitty-Bang-Bang: The Magical Car, created by James Bond creator Ian Fleming and adapted for the big screen by popular children’s author Roald Dahl. The car was named after the strange noise that its engine made, but there’s more to the old banger than meets the eye as it took eccentric adventurer Caractacus Potts and his family on adventures across the sea and on air. Much of the action involving the car doing its most extraordinary feats takes place within an extended fantasy sequence, but don’t think too much about that and just sit back and enjoy the infectious songs by the Sherman brothers. 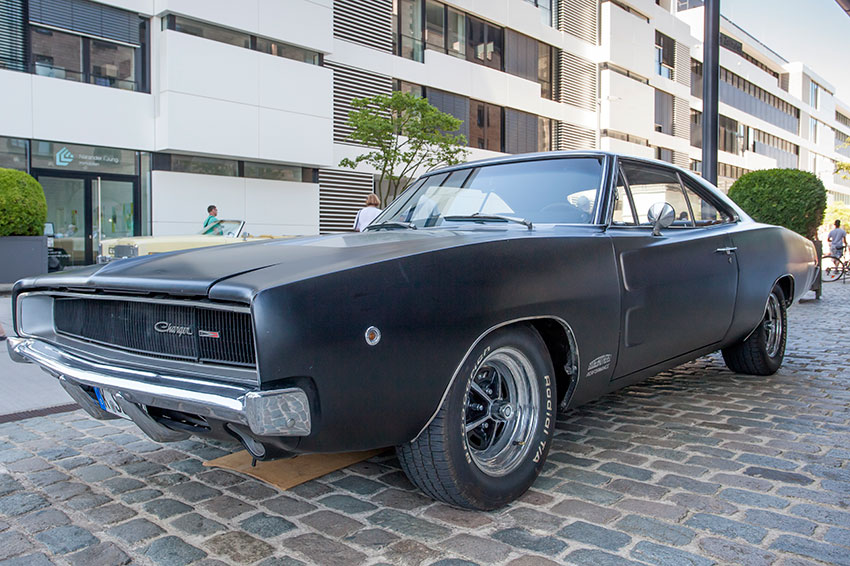 ‘I live my life a quarter mile at a time. Nothing else matters.’ – Dominic Toretto (The Fast and the Furious)

If you like American muscle, then there’s no finer film series than the high-octane melodrama The Fast and the Furious. And we’re not talking about the bulging biceps of Dwayne ‘The Rock’ Johnson or the strong and silent bulk of Vin Diesel. While deuteragonist Brian O'Conner favoured the refinement of Japanese sports cars, Dominic Toretto’s pride and joy was his late father’s 1970 Dodge Charger R/T – the perfect vehicle when you live a quarter mile at a time. Sadly, the car was blown up in the low-key third act of Furious 7 when notorious bad guy Deckard Shaw used it to drive off the roof of a parking garage while throwing a bag of grenades into a helicopter. Presumably the insurance company did not pay out. 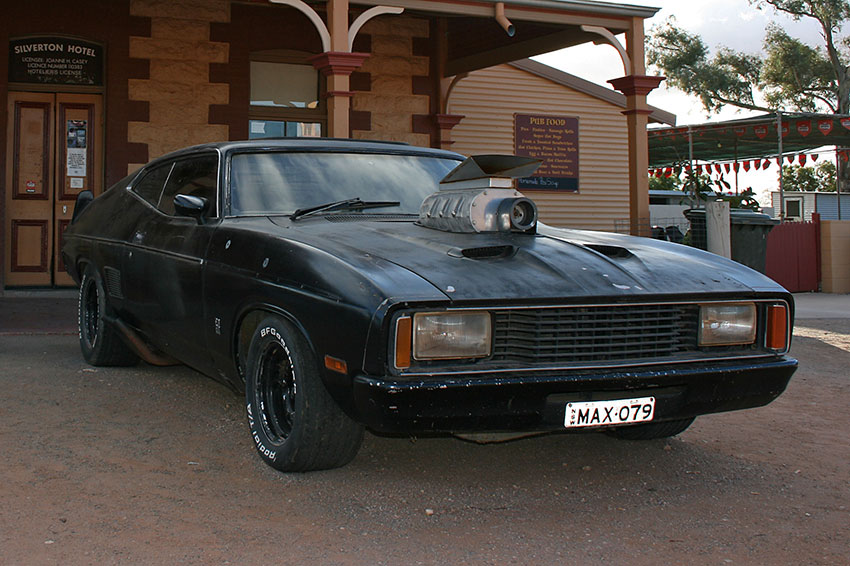 ‘I remember a time of chaos, ruined dreams, this wasted land. But most of all, I remember the road warrior, the man we called Max.’ – Narrator (Mad Max 2: The Road Warrior)

‘Mad’ Max Rockatansky was a police officer who worked and raised his family while society collapsed around him. After some unfortunate events involving a biker gang, he became a lone road warrior, wandering the desolate wastelands of the dystopia and dishing out his own form of justice. Every wandering anti-hero needs a trusty steed and Max’s was the Pursuit Special ¬– the last of the V8 Interceptors. This modified Ford Falcon XB GT got plenty of upgrades during the series but was savagely crushed during the events of Mad Max: Fury Road. Still, if Max can transform from Mel Gibson into Tom Hardy, there’s hope that his muscle car will one day return.

The Bluesmobile – The Blues Brothers 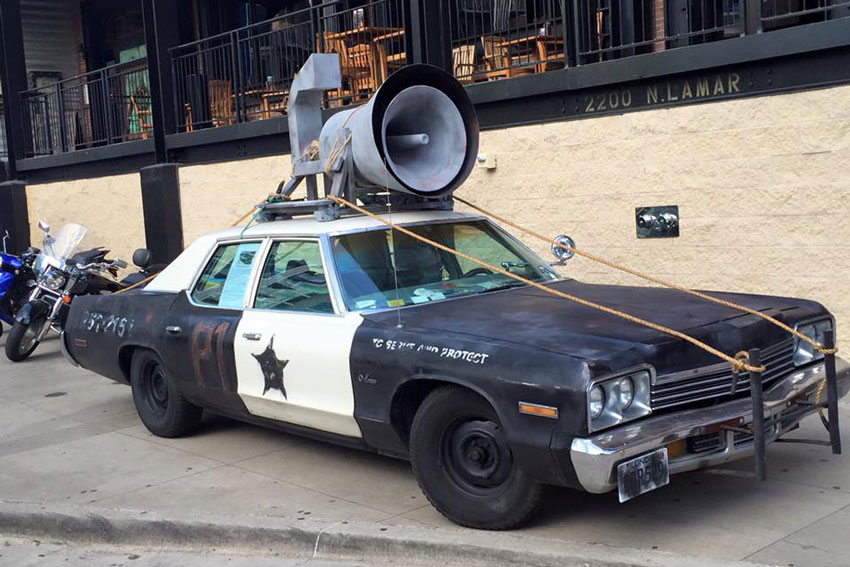 'It's got a cop motor, a 440-cubic-inch plant. It's got cop tires, cop suspension, cop shocks. It's a model made before catalytic converters so it'll run good on regular gas.’ – Elwood Blues

At one point in time, The Blues Brothers held the record for the most cars destroyed during a single film shoot, a record broken by the uninspired belated sequel Blues Brothers 2000 in 1998. Putting the car into carnage was the 1974 Dodge Monaco, christened the ‘Bluesmobile’ by the eponymous brothers Jake and Elwood Blues. Jake bought the former Mount Prospect patrol car at a police auction, having auctioned off their old Cadillac to buy a microphone. The car soon proves its value with its police modifications allowing it to perform some incredible stunts. In total, 13 Bluesmobiles were used during the production, some rigged for speed and others for stunts. Sadly, it fell apart following a chase involving in the Illinois State Police Department, but since Jake and Elwood went to jail right after, they didn’t really need it.

‘Why this car is automatic! It's systematic! it's hydromatic! Why it's greased lightnin'!’– Danny Zuko (Grease)

Greased Lightning, also known as 1948 Ford De Luxe Convertible was the hero vehicle from the 50s-set high school musical Grease. The car is customised with a delightful paintjob, and despite initially being a ‘hunk of junk’, it’s magically transformed into a purring silver machine in the conveniently well-equipped school workshop. In the original stage musical, Kenickie sang the leading vocals on the track ‘Greased Lightnin’ – it is his car after all. The politics of movie sets mean that character was sidelined in the film with John Travolta’s Danny Zuko taking the mic as the T-Birds transform the car from a wreck to a racer that was revved up enough to win the all or nothing race at Thunder Road.