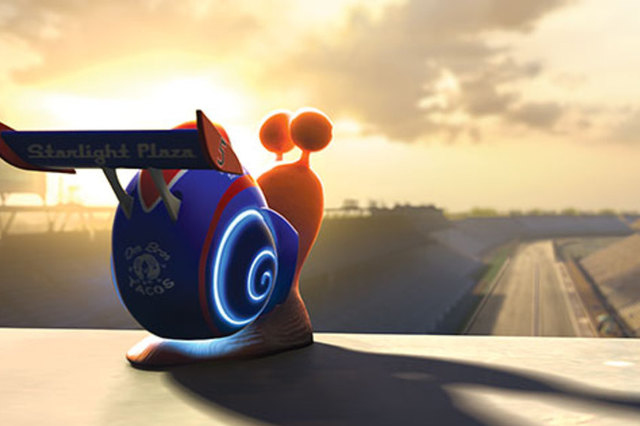 In the run up to the film's release, Chevrolet will feature Turbo the snail in its TV ads

It’s the typical hero story. A snail, suddenly imbued with the power of incredible speed after a freak accident, embarks on a quest to compete in the Indianapolis 500 race. Well OK, it’s not quite typical. But it’s the plot of the upcoming DreamWorks film, Turbo.

Chevrolet have teamed up with animation house DreamWorks, the company responsible for Shrek, Madagascar and Kung Fu Panda, to tell the story of Turbo the snail – and promote their cars while they’re at it.

The collaboration lends authenticity to the film, in which racing environments feature heavily. A Chevrolet Camaro appears in the movie, and the Chevrolet “bowtie” logo is also visible at the racetrack – paralleling the real life alliance between INDYCAR and Chevrolet.

Chevrolet designers assisted DreamWorks with the animation of the Camaro and the Chevrolet-powered Indy cars that appear frequently in the film, a “high-velocity 3D comedy about a snail who dares to dream big - and fast.”

Indeed, it is an encounter with a Chevrolet Camaro that gives Turbo his, er, turbo powers – and Chevrolet have also built a real-life replica of the custom Camaro for marketing purposes. Moreover, in the run-up to the film’s release, the car manufacturer will feature Turbo the snail in its TV advertising– worked around the brand’s “Find New Roads” marketing message.

Tim Mahoney, Chevrolet’s Chief Marketing Officer, has commented: “Turbo is one of the most anticipated films of the summer, and we couldn’t be more excited about this collaboration, which aligns perfectly with Chevrolet’s renewed presence in INDYCAR… Millions of future drivers will be inspired by Turbo to realize their dreams both big and small.” Awww!

Coming to the UK in October, Turbo hits the big screen in America on the 17th July. It is the first time DreamWorks Animation has partnered with a brand in this way.

However, it’s not the first film to show a Chevrolet, a car brand which appears to spark creativity. The dependable American brand has been featured in 2 Fast 2 Furious, Transformers, Harold and Maude and the Camaro was resplendent in the race scene in Better Off Dead.

We don’t have Camaros or Corvettes, but we do have great deals on the brand new Chevrolet Spark and Chevrolet Cruze. To find out more about our range of Chevrolet vehicles, click below.

Find out more about Chevrolet