Being nice is all very well – but surely, say opponents, we really need infrastructure and enforcement? 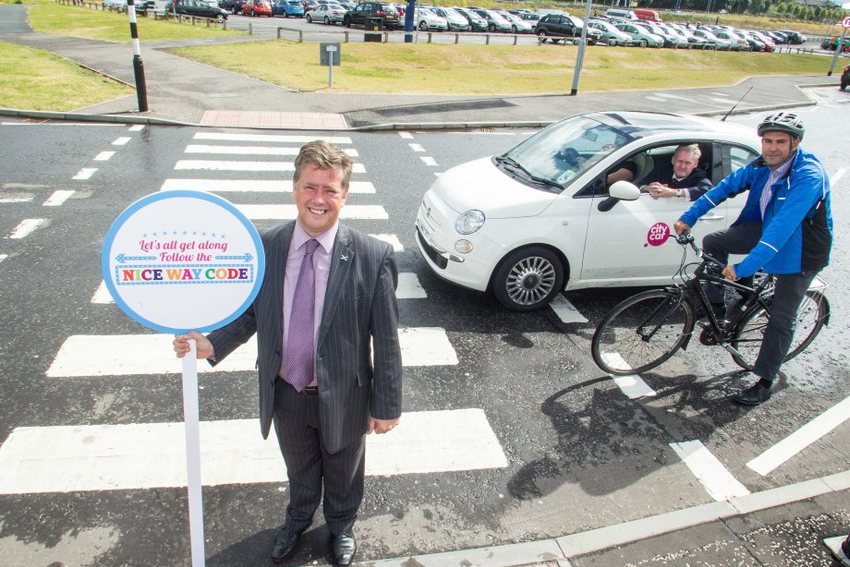 Keith Brown announced the campaign at the Transport Museum in Glasgow, casually ignoring rules of the road for the photoshoot

The Nice Way Code campaign from Transport Scotland launches on Monday 5th August, aiming to encourage mutual respect between all types of road users, from car and van drivers to cyclists and pedestrians. But some groups and individuals have hit out at the plans, saying that they don’t adequately address the real issues faced by road users – particularly cyclists.

Transport Minister for Scotland Keith Brown announced the initiative yesterday at the National Transport Museum in Glasgow, supported by members of the Institute of Advanced Motoring (IAM) and Cycling Scotland. The campaign, due to be rolled out in full next week, are also backed by groups such as Sustrans, Paths for All and the AA. Posters and TV advertising, delivering serious messages in a humorous and upbeat way, will encourage people to “Follow the Nice Way Code.”

The campaign encourages all road users to be more courteous and respectful, asking them to make “small changes to their behaviour” to make roads “a safer and more pleasant place.”

“One death on Scotland’s roads is one too many and our focus is on working with key safety partners to reduce the numbers further. I believe this campaign will play its part in making Scotland’s roads safer for all users in the future and raise awareness that road safety really is everyone’s responsibility.”

However, not everyone feels the campaign will tackle road safety in a meaningful way.

But there has been some controversy over the new campaign, including the creation (and subsequent suspension) of a parody Twitter account. @NiceWayCodeGB was removed by Twitter but @NiceWayCode are claiming that they didn't report the account and aren't trying to subdue debate.

Those on social networking sites have been vocal in condemning the Nice Way Code – despite the fact it hasn’t even fully launched yet – for various reasons:

@farnie: @nicewaycode do you have any data on the KSI's for cyclists & how many are attributed to driver fault? #justbeingnice #nicewaycode

James Avery on Facebook: Sorry, but we need infrastructure, not just safety messages.

Kim Harding tweeted: @nicewaycode Can you show on place in the world where this approach has worked? No, it is infrastructure & lower speed limits that work

Pedal on Parliament (POP) have been particularly vocal in their criticism of the campaign, stating that proposed measures will not be enough to tackle road deaths – education is needed, they say, but must be backed up by visible enforcement and in addition to improved roads and lower speed limits.

Sally Hinchcliffe, one of the organisers of POP, commented:

“While we don’t disagree that behaviour needs to improve between road users, simply asking us all to be nice to one another without backing it up with real changes and enforcement is a waste of taxpayers’ money. Most drivers don’t set out to harm anyone, whether they’re cyclists or not. It’s the way our roads are designed and policed that put drivers and people on bikes into conflict. We’d rather see that money spent on cutting speeds, or improving known accident black spots. It’s a drop in the ocean, but it would be a start.”

However, the Nice Way Code has used its blog as a vehicle for responding to these criticisms, posting updates in retaliation to claims that the campaign is useless.

"Intended as the start of a conversation"

The Nice Way Code blog has responded to these criticisms as follows:

“The campaign is designed to make the roads a more tolerant and harmonious place. We’re not under the impression the Nice Way Code is going to make the roads a wonderful place free of accidents or road rage overnight of course. It’s intended as the start of a conversation about how we treat our fellow roads users. It is there to support infrastructure and enforcement measures.”

The research they conducted pointed clearly towards keeping the tone light and addressing all road users rather than one group, they argue. Furthermore, in terms of shifting the focus to one group of road users: “It was clear that although there are people who hold strong, (often vocal) and diametrically opposed views, the vast majority occupy the middle ground – a place where they witness good and bad road behaviour from all quarters on a daily basis.” The Nice Way Code blog address the fact that most bad behaviour on the roads isn’t wilful and that an accusatory campaign would alienate people. “So we developed ideas that would promote best practice… and create discussion, debate and self-reflection.”

“We know that it wont be an overnight love-in, but if we help to break down the barriers, and deliver an even-handed campaign, then we can help to ferment a culture of acceptance, and in time empathy, between all road users.”

“Road safety is everyone’s responsibility and it is important we move away from the ‘us and them’ mentality of some drivers, cyclists and pedestrians when in fact almost everybody falls into at least two of those categories.”

And Edmung King, President of the AA, followed a similar line:

“We have been campaigning for years to break down the tribalism which exists on our roads between some drivers and some cyclists. Road users, being individuals, are all different, so sometimes they don’t conform, make mistakes or fail to show respect for others.”

The Nice Way Code may be attracting a lot of negative attention but, as they say themselves, “If the Nice Way Code can inform, remind or nudge people to be more aware of each other and share the road, then that’s got to be good for everyone.”