Putting the 'Reliant' in Reliant Robin, John Ward has converted a car into the world's smallest working fire engine 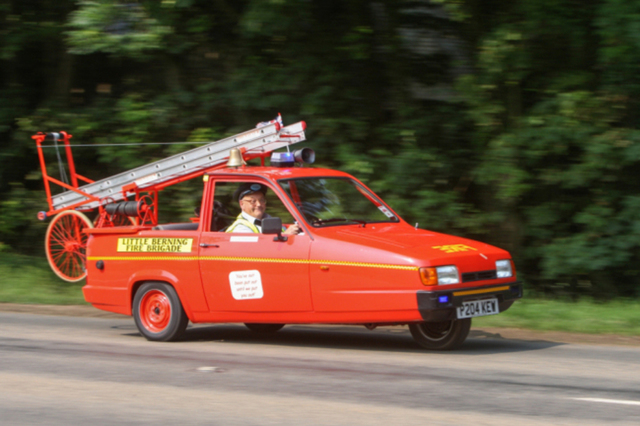 The Reliant Robin Fire Engine features a £2 bell and a £20 ladder. Image: Metro.

With a ladder, bell, six water hoses and the motto "You've not been put out until we put you out", John Ward's converted Reliant Robin receives plenty of attention when he takes it out for a spin, says today's Metro.

Mr Ward, a 70-something-year-old from Spalding, Lincolnshire, is a self-taught engineer who renovated the car with bits and pieces from car boot sales, following announcements of cuts to the fire services.

It took Mr Ward four months and a few hundred quid to turn the three-wheeler car, made famous by Only Fools and Horses, into an operational fire truck. With red and blue lights, a 50-litre water tank, water cannons and fire extinguishers, the little fire engine is capable of tackling small fires and blazes. The six water cannons can all be activated from the dashboard.

The classic car can reach 60 mph, is fully street legal and seats two people. It will be used to raise money for the Firefighters' Benevolent Fund.

What makes the Reliant Robin so good?!

Launched in 1973, the three-wheeled Reliant Robin became synonymous with rogue traders and cockney geezers thanks to the TV show Only Fools and Horses. The Robin was the first car to have a rain strip running above the doors, and had a capacity of 30 cubic feet. It wasn't the only three-wheeled car at the time, but was certainly the most famous. Thanks to its unique style and low weight, it is subject to lower taxation in the UK than other cars of its size and shape, and you only need a B1 category licence to drive one.

For more 2-seater beauties, check out our range of convertible cars. And for little cars that won't cost a bomb, search our small cars under £6000.