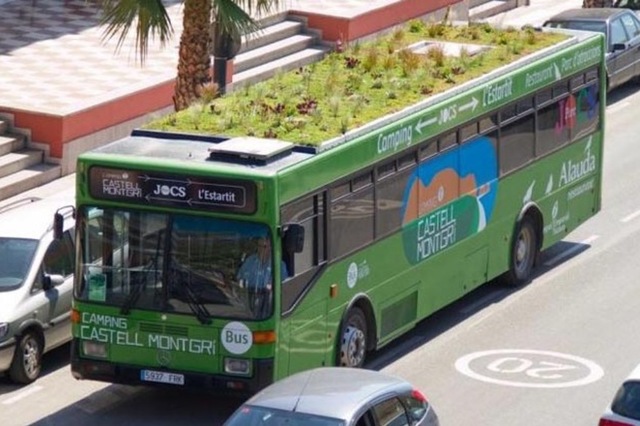 A bus with a rooftop garden has been launched in Spain in an attempt to tackle air pollution.

Marc Grañén, the man behind the leafy creation, installed the garden on the roof of a bus that normally shuttles tourists back and forth from a camping site - Estartit near Girona, Spain.

“The lungs of a city must grow at the same rate as its population, but much-needed green areas are not always available.”

“My mission is to expand the garden area in urban environments, increase the absorption of CO2 and give public transport a new ecological and tourist attraction.”

What is the Phyto Kinetic System?

Most cities are limited in the amount of green space they can develop. Grañén believes in transforming the areas we already have – even if it’s just the roof of a bus. The garden uses lightweight hydroponic foam and sedum carpets rather than soil. The plants are watered using condensation from the bus’s air conditioning – normally a wasted by-product.

There’s no doubt that the system will add some welcome greenery to an otherwise plain city bus. Although additional weight from greenery and plants could actually end up increasing CO2 emissions from the bus – not the desired effect – Grañén claims that the weight of the Phyto Kinetic has been carefully considered.

Could we be seeing more of these buses?

According to Eco-Business, Grañén is in talks with a major auto company to fund an entire fleet of Phyto Kinetic buses in Barcelona. And who knows – we could be seeing sprouting buses on UK roads in the future too.