During a recent Greenpower project, a group of young people from Scotland were given the chance to race a custom-built Formula 24 car against teams from all over the world. 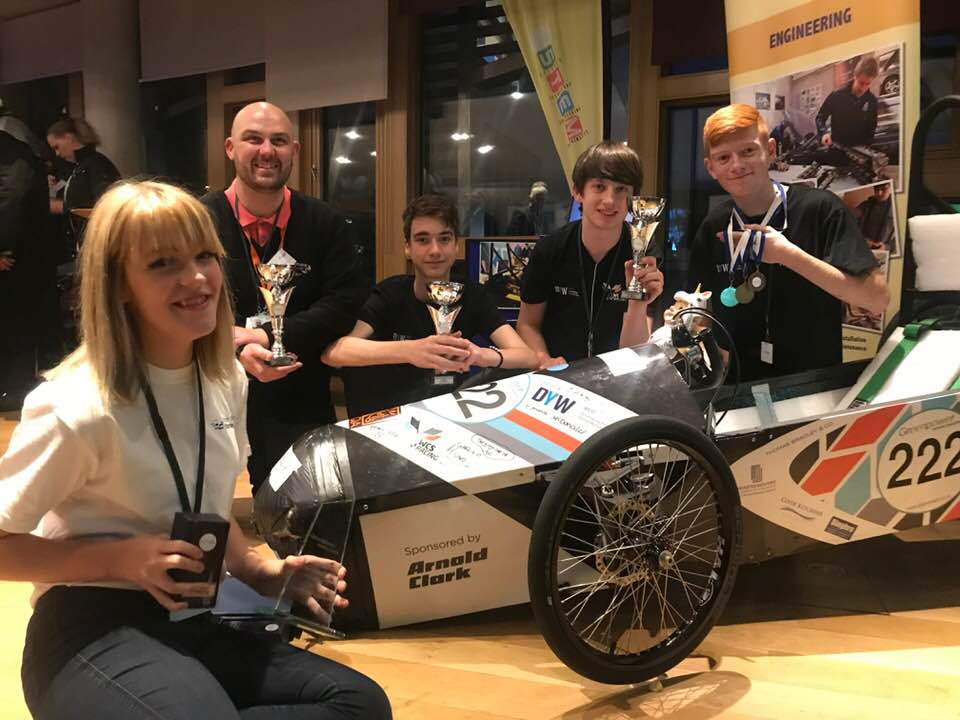 Members of the Greenpower team

What is the Greenpower project?

Greenpower Education is a UK-based charity focused on getting young people interested in science and engineering. The charity does this by involving them in an exciting motorsport project.

There are over 700 teams throughout the UK and 35 events, including an annual International Final that takes place at Rockingham Motor Speedway. More than 10,000 students take part every year, from primary school through to university.

During the project, the teams attend college one day per week and work towards racing a Formula 24 race car. There are varied tasks involved, such as:

Earlier this year, the Renfrewshire Gold Slam team approached Arnold Clark for potential sponsorship. Suzanne Sherry, Early Careers Manager, was so impressed after speaking with the team that she arranged for their sponsorship and an introduction to the creative team at Arnold Clark’s Hillington head office. It was here that the team got some practical help for their race car’s wrap design.

‘When I met the Gold Slam team, I was blown away. They were so committed and showed fantastic enthusiasm. The company jumped at the chance to support them and we were delighted to be able to use our creative department’s expertise to help guide them through some of the design aspects of the challenge.’

From the first race to first place

The first race brought some valuable lessons to the team’s attention. The car was too heavy, which was draining the batteries and causing the car to be slow on the track. This gave them something to work towards to improve their performance at the next race. There was still a lot to be proud of, though, when the team was awarded ‘Best Use of Digital Design’ for their impressive car wrap.

Learning from their performance in the first race, the team set to work on improving their car ahead of the next race in Aberdeen. Recognising the need for a lighter chassis, they decided to change the body of the car from metal to plastic to improve the car’s speed. The car was re-wrapped and the team were able to attend the next race confident that they’d do better.

The group came first in the Kit Car category and won second place in the overall race out of 15 cars. They also won an award for the best use of digital design for the second time.

Attending the International Final at Rockingham

For the next race, the team would have to up their game as they were set to compete against other Greenpower students from all over the world.

Sharing a garage with teams from China and Portugal gave the youngsters a taste of what it’s like to compete in a Formula 1 race.

They did an amazing job, coming 24th in the world, and placing first for Scotland.

The first season has been a real journey for all of the young people involved, and has given them a clear focus for the future.

Many of the boys have started apprenticeships or gone on to full-time motor vehicle courses at college.

Two of the girls involved in the project have since been offered apprenticeships with Arnold Clark and one hopes to apply next year after returning to school.

All three girls have become Dare to be Different ambassadors, an initiative that encourages young women to pursue a career within the automotive industry.

After learning she had been accepted on to the Arnold Clark apprenticeship programme, Emma Gormley received more great news, when she was announced as the winner in the CV Builder (Youth) category at the Renfrewshire Employability Awards 2018.

Emma Gormley and Emma MacDonald are now looking forward to beginning their apprenticeship journey with the company.

In recent years, Arnold Clark has been working towards reducing the gender gap in its garages, and has committed to increasing the number of female employees by 5% over the next two years.

Next year, a new initiative called Girls With Skills will be launched, with the aim of getting more young women excited about automotive apprenticeships, through school visits and on the road with our touring apprenticeship van.

Emma Gormley, Arnold Clark Apprentice and Greenpower student, describes her introduction to the automotive industry at a Dare to be Different event earlier this year.
Apprenticeship programmes