Motoring journalist Tim Barnes-Clay travelled to Seoul to find out if the e-Niro has that vital spark. 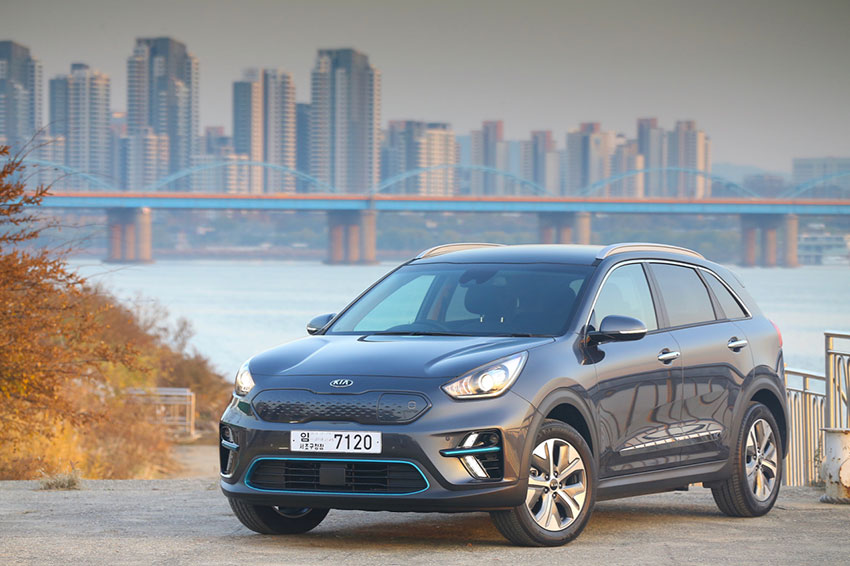 The Korean automaker has ushered Kia e-Niro into the automotive arena in the hope of putting to rest the reservations of electric-car naysayers.

The cynics tend to think that vehicles without combustion engines don’t have the range or the performance of conventional cars – and they always slam the price. After having a first drive of the e-Niro in South Korea, I’m pleased to report that Kia will probably convert the non-believers. Why? Well, the e-Niro is more credible than any electric car to date, including Hyundai’s mechanically related Kona Electric. While the two vehicles have similar powertrains and platforms, the Kia houses its ingenious technology in a more traditionally-designed and down-to-earth bundle.

Both the new e-Niro and the existing hybrid-powered Niro take on a curious external form, akin to an SUV in profile but with the ride height and wheels of a regular hatchback. However, the e-Niro has some slight differences. Study the car, and you’ll spot the sleeker front bumper, a fared-in grille and 17-inch alloys. The rear of the Kia wears a modified trim to complement the nose, too, helping to provide a more slippery shape.

Inside, the car is like other Kia Niros. It might not give the seven-seat practicality of some bigger SUVs, but the pure electric e-Niro is a big-hearted five-seater. The driver and front passenger seats have plentiful room for head, shoulders and feet, and getting into a comfy driving position is easy. 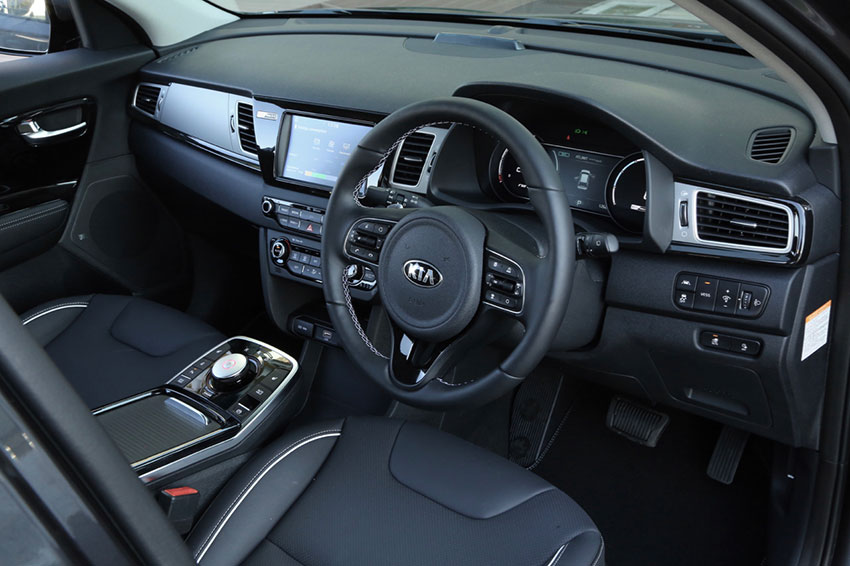 The dashboard is bland yet functional, and there’s an ultra-modern infotainment system. The most obvious difference, though, is within the centre console. The usual gear selector has been replaced with a rotary dial. This little change in detail unfurls some additional storage room, too.

Rear seat passengers will be just as contented with their journeying conditions, with not even the middle occupant getting the short straw on any but the most protracted trips, where shoulder-room can sometimes feel a little tight with three abreast. There are convenient compartments for bits and pieces, including a stowage box in the centre console.

The e-Niro’s 451-litre boot is larger than the ubiquitous Nissan Qashqai's, but it's less than the 510-litres in the Seat Ateca. Mind you, it's still a good size, and you can store the charging cables under the load floor. 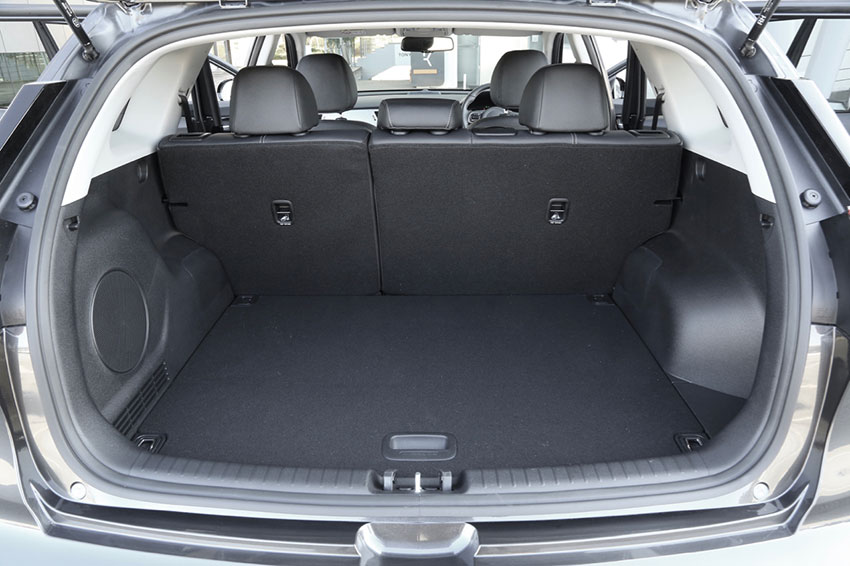 Currently, there is only one trim level available – and it's called the First Edition. Okay, it's not very original, but who cares when you get a car as well kitted-out as this? The e-Niro in this guise comes with a reversing camera, heated leather seats, lane keep assist and forward collision warning.

The Kia gets a 204ps motor that propels the front wheels. This, as well as the 64kWh battery pack, is used in Hyundai’s Kona Electric. However, unlike the Kona, a 136ps, 39kWh variant won’t be sold in the UK.

The motor’s power output boosts the Kia e-Niro’s athleticism well above the current plug-in and hybrid Niro models. What’s more, once the substantial surge of torque is taken into consideration, the car feels livelier than many ‘warm’ family-hatchbacks. There’s even enough grunt to get a squeal from the front tyres, as I found out when putting my foot down to escape Seoul’s traffic.

There’s a couple of paddles behind the e-Niro’s steering wheel to regulate the force of brake regeneration. And while you can’t drive the Kia with one pedal as you can in Nissan’s Leaf, the trio of levels allows you to make the most of the e-Niro’s charge.

When it comes to safety, the e-Niro is up there with the best, with kit such as autonomous emergency braking and the previously mentioned lane keep assist fitted as standard. Therefore, the all-electric car should get the same top five-star Euro NCAP crash safety score as other Niro models equipped with this safety package.

The e-Niro cuts the amount of work for its driver when lane keep assist works in unison with adaptive cruise control to follow the vehicle in front, identifying the road markings and making steering alterations to keep you in lane on busy motorways. I found this very handy when driving in hectic traffic.

What about the all-important range then? Kia claims that the e-Niro can manage 282 miles on one charge. More impressively, the official figure is higher when driving around town. That means many e-Niro drivers will only need to charge up once a week – at the most. 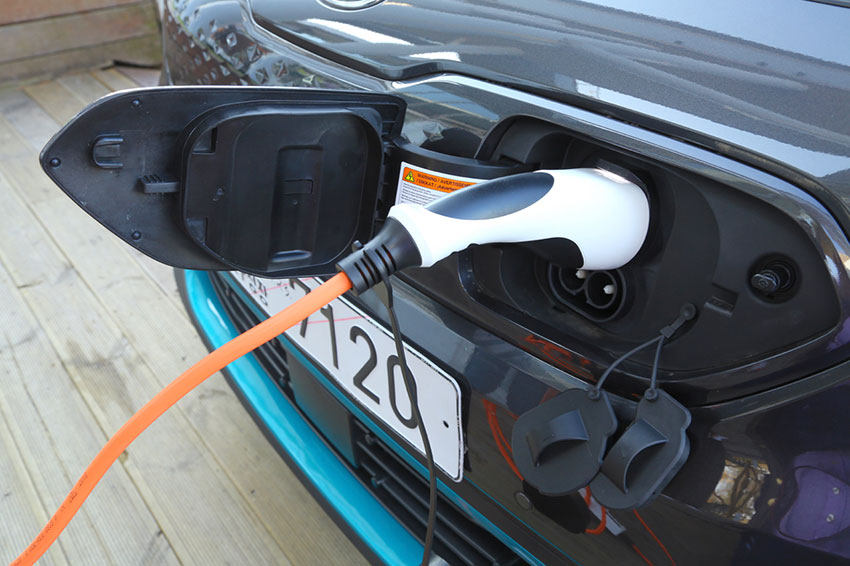 Granted, the topping up process isn’t as straightforward as a quick fill-up at the pumps, but connect the Kia to a 100kW quick charger and less than an hour later you’ll have charged the battery pack from next to nothing to 80 per cent. That’s enough energy for the e-Niro to cover between 226 and nearly 300 miles, depending on how you drive it. 0-60mph is achieved in a quick 7.5 seconds, and the top speed is 104mph.

Importantly, the e-Niro’s battery range outshines the Nissan Leaf’s, although the Leaf is a bit cheaper. This car aside, the e-Niro has little rivalry until other automakers start manufacturing electric vehicles with better range.

Indeed, there are very few drawbacks with this e-Niro. Okay, it can understeer a bit due to the weighty battery-pack, but then this pack gives the Kia a low centre of gravity. So, no, there aren't any significant gripes from me.

At the end of the day, the e-Niro is a no-nonsense five-door crossover that makes electric car ownership more appealing than ever. The model goes on sale in the UK in April 2019.

*Price correct at time of publishing and may be subject to change.