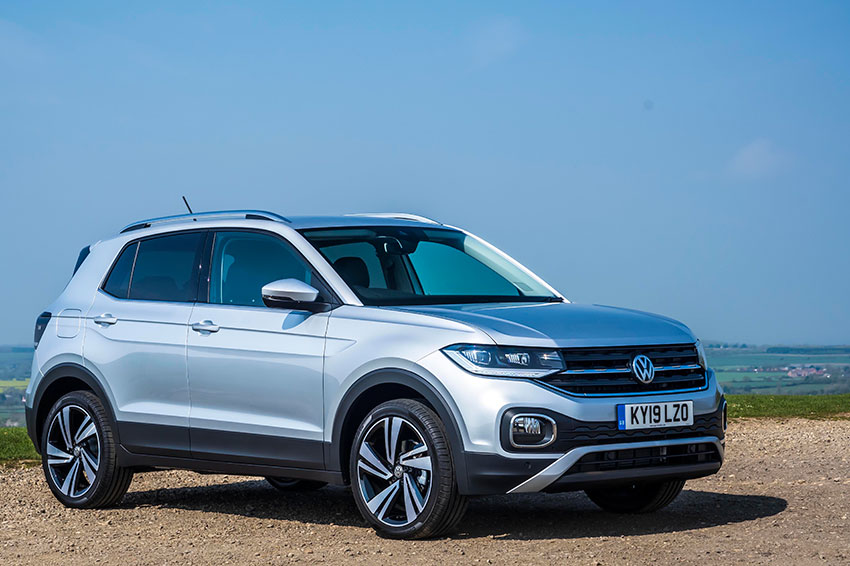 As you gaze around the supermarket car park, I’m sure it won’t have escaped your attention that the world appears to have gone compact crossover mad. Everywhere you look, the roads are chock-full of the baby SUVs. And if that concerns you, I have bad news: it’s about to get even worse.

However, and more importantly, the good news is the latest arrival promises to be one of — if not THE — best of the bunch. It may have arrived late to the party, but with the company estimating the compact SUV segment will double in size in the next ten years, it seems Volkswagen has merely been keeping its powder dry.

The new front-wheel drive-only T-Cross joins the T-Roc, Tiguan and Touareg in Volkswagen’s ever-expanding T-themed SUV line-up. Borrowing its floorpan from the Polo — and built on the same platform as the Audi A1 and Seat Ibiza — the T-Cross is Volkswagen’s littlest SUV. It’s also the sister car to the SEAT Arona and the upcoming ŠKODA Kamiq.

So, what are the first impressions? 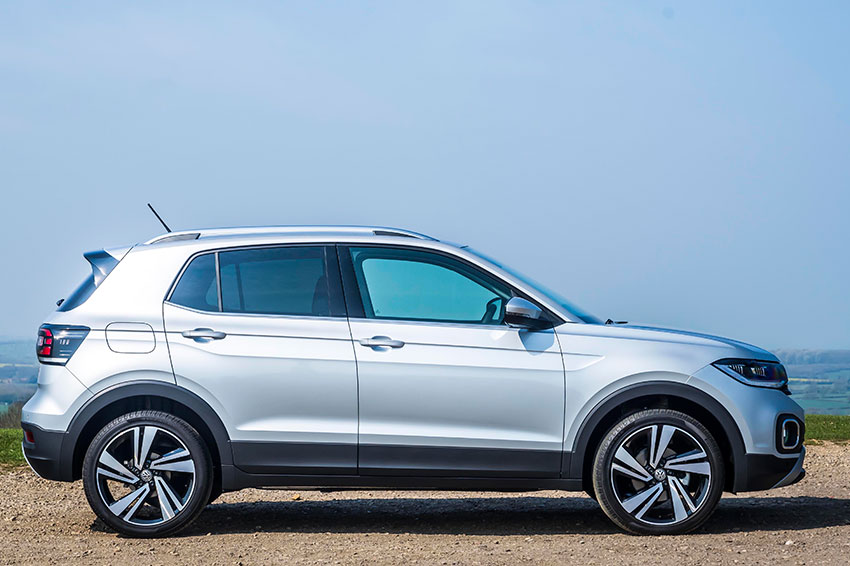 I’d been looking forward to driving the T-Cross. But then again, I’d also looked forward to my first experience of the larger T-Roc, which was launched in late 2017. That proved a slightly underwhelming experience, thanks primarily to an interior that had clearly been done to a strict, restrictive budget… and as a result felt brittle and plasticky.

So you could understand my trepidation as I headed towards the rolling countryside around Lambourn, the home to many of the UK’s top horse racing trainers, and the location for the T-Cross drive.

First impressions were impressive. The T-Cross is actually very similar in size to the T-Roc (that one’s built on a platform related to the Golf), but somehow the newcomer — certainly in my eyes — is the bolder, more striking looking car.

It shares many of the external lines of the T-Roc, but there appears to be a sharper, edgier, more imposing look to the T-Cross, both at the front, and most definitely at the rear where a ‘light bar’ stretches across the full width of the tailgate, accentuating the T-Cross’s width.

But what about the cabin? 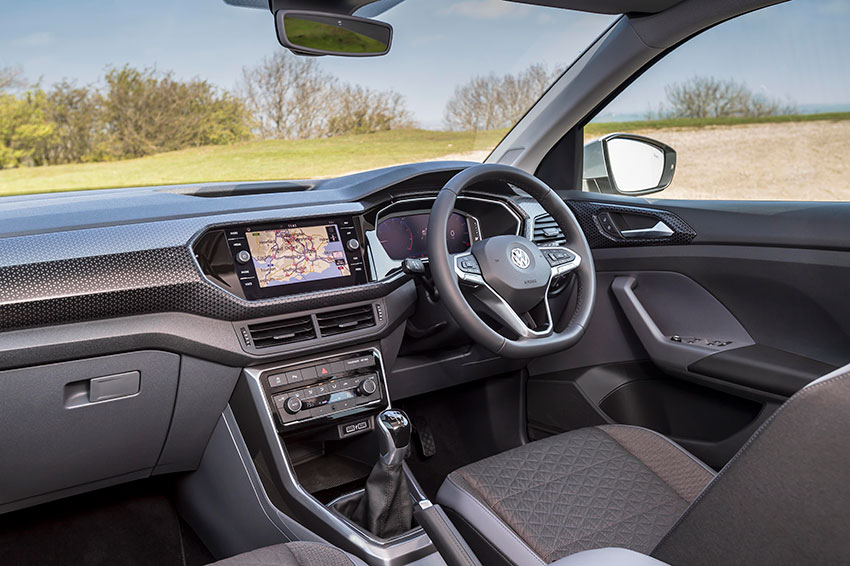 So: to the cabin. And phew! It looks and — more importantly — feels like a proper Volkswagen. The major points of contact, like the sporty, chunky steering wheel, gearshift and switchgear are all top quality. Of course, there are areas of scratchy plastic secreted around the cabin, but it’s clear the build quality of the T-Cross is higher than many of its rivals: I didn’t hear one squeak or rattle in the full day’s driving.

An eight-inch touchscreen, with smartphone compatibility, sits mid-dash in the top two trim levels, while the range-topping R-Line — which, I have to admit, would be my personal choice — gets the clear, configurable Active Info Display digital instrument panel. Sensibly, and thankfully, Volkswagen’s designers have left good old fashioned physical switchgear below the middle screen for the likes of the air conditioning. The whole cockpit is one of the most intuitive to use of any car currently on sale.

Is it really just another tall hatchback? 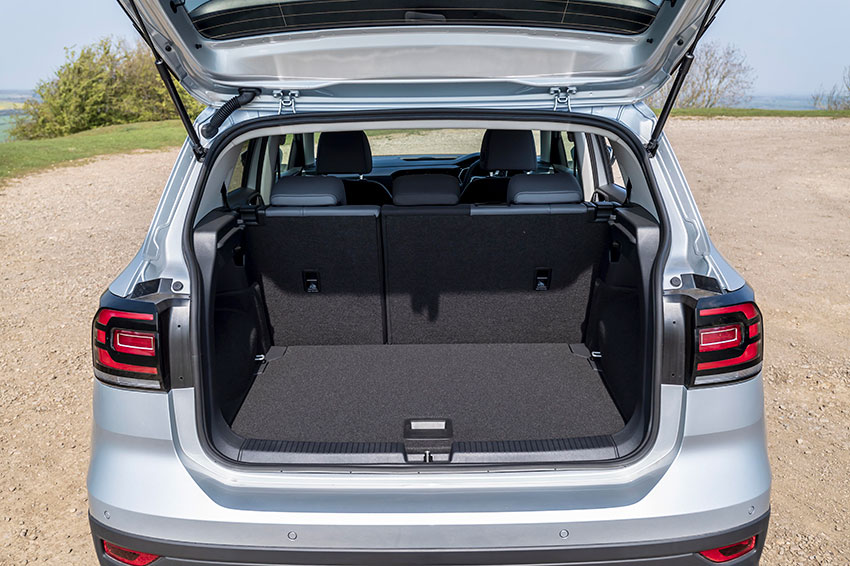 As for storage, the door bins are massive. There’s a neat drawer under the passenger seat and a recess on top of the dashboard with a rubberised base so whatever you throw in there doesn’t slip around.

Noticeably, you sit higher than in the ‘sister’ SEAT Arona, and you’re 100mm higher than in a Polo; the result is the Volkswagen feels more like an SUV than a tall hatchback. And all-round visibility is excellent.

At 4235mm long, the T-Cross is 55mm longer than a Polo, and 138mm taller. The benefit of the extra length is found in the rear seats where there’s as much space as the larger T-Roc; a six-foot passenger can sit behind a six-foot driver.

Plus, the rear 60/40-split rear bench seat can be slid forwards or backwards to create either more knee room or, more likely, additional stowage space in the boot… the latter increases the standard 385 litres to 445 litres, which is the same as the T-Roc.

And what engine choice do I have?

The T-Cross — whose price range extends from £16,995 to £26,740 — is currently available with the 1.0-litre, three-cylinder petrol engine, but with a choice of two power outputs: 94bhp or 113bhp. While the smaller is a capable unit, I’d recommend the larger. There’s also a 93bhp 1.5-litre diesel. Me, I’d stick with the 113bhp petrol. It’s a stonking wee engine that has already proved its worth in the likes of the Polo and Ibiza, and is perfectly suited to the demands of the T-Cross. Buyers can also choose either the standard six-speed manual, or seven-speed twin-clutch DSG auto. I tried both: the manual is slick and precise, while the DSG is perfectly calibrated to maximise both the engine’s performance and smoothness. There’s even a proper physical handbrake lever – yippee! 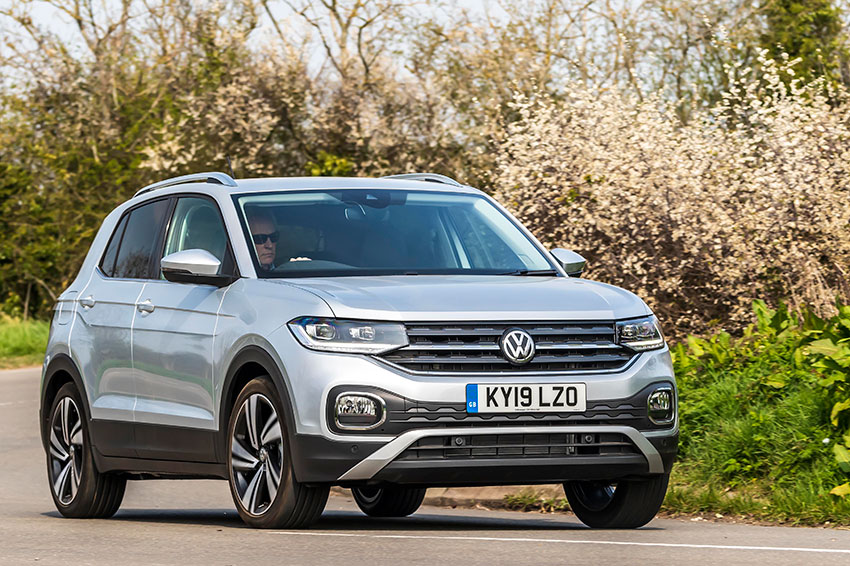 If you are harbouring any concerns about engine noise from the three-cylinder unit; don’t. It’s as quiet as a quiet thing, and the cabin is beautifully isolated from any engine, tyre or wind noise. Volkswagen may have been late to the compact crossover party, but the T-Cross lifts the bar and sets new standards, leaving the likes of the Renault Captur, which is due to be updated shortly, and Nissan Juke, trailing behind. If you’re planning to move into the segment, then this is definitely the one to have. Welcome to the club.