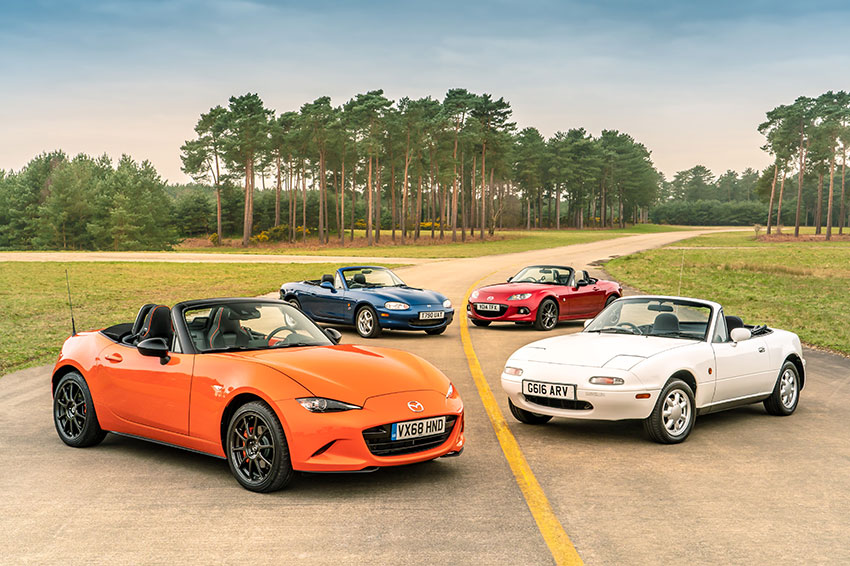 Everybody loves a Mazda MX-5, don’t they? Well, it seems that way to me. I remember the car being unveiled not long after I’d passed my driving test. I wanted it so badly back in 1989.

And guess what? I've never owned one, but I've managed to borrow a few test cars over the years – and that has almost been enough to satisfy my appetite. But the best yet is the MX-5 30th Anniversary Edition. The model does what it says on the tin – it’s a special edition of the roadster, made to celebrate its 30th birthday.

What's different about this one? 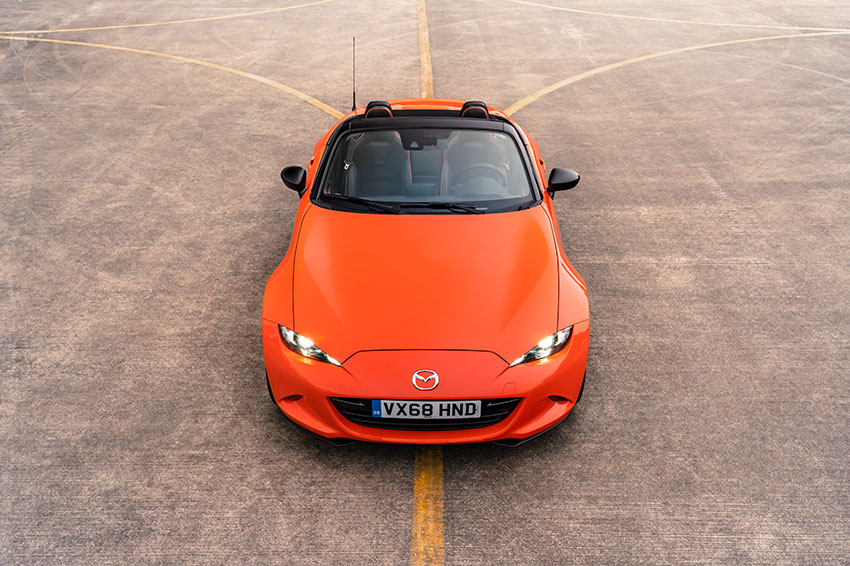 There have been lots of special edition MX-5s made over the years. Enthusiasts love them – and this out-of-the-ordinary MX-5 stands out a mile because it's orange. Very orange. Indeed, poor old Dale Winton, bless him, would be jealous of this Mazda's hue. That's not all there is to the Anniversary model, though. When they say special edition, they mean it – you'll be lucky to get your hands on one. Only 550 are coming to the UK – and that’s from a run of 3000 units for the whole world – made up of 180 Retractable Fastbacks (RF) and 370 Convertibles.

So, as well as what Mazda calls the 'Racing Orange' colour, the 30th Anniversary Edition sports forged aluminium Rays wheels, made solely for the MX-5 in collaboration with Rays Co Ltd. Then there’s (surprise, surprise) a 30th anniversary badge exhibiting the car’s serial number. Then there’s more orange. Yes, even the brake callipers are that colour – and they’re not any old brakes – for the first time in Britain the MX-5 gets Brembo brakes – well up front, anyway.

What about the interior?

Step inside, and there's a bespoke sense about the car. Even more orange is present to remind you you're in an extraordinary machine. Everything from the door trim to the dashboard to the seats, air vents, gear lever and steering wheel gets the colour treatment. Then there’s Alcantara trim on the Mazda’s instrument panel and door trim to add a sense of exclusiveness. You also have hip-hugging Recaro seats to support you on your road trips. And, you get something you wouldn’t have had 30 years ago – and that’s connectivity. Yep, you’ll be able to hook up your smartphone and see its display mirrored on Mazda’s infotainment screen, courtesy of Apple Carplay and Android Auto.

Under the bonnet, there’s a 2.0-litre petrol unit – pushing out 184ps. This is same amount of horsepower produced by all 2019 MX-5s using the 2.0-litre Skyactiv-G engine. Additionally, both the RF and the Convertible 30th Anniversary body types come with a six-speed manual gearbox, Bilstein dampers, limited-slip differential and a strut-brace.

Underneath it all, it’s still an MX-5 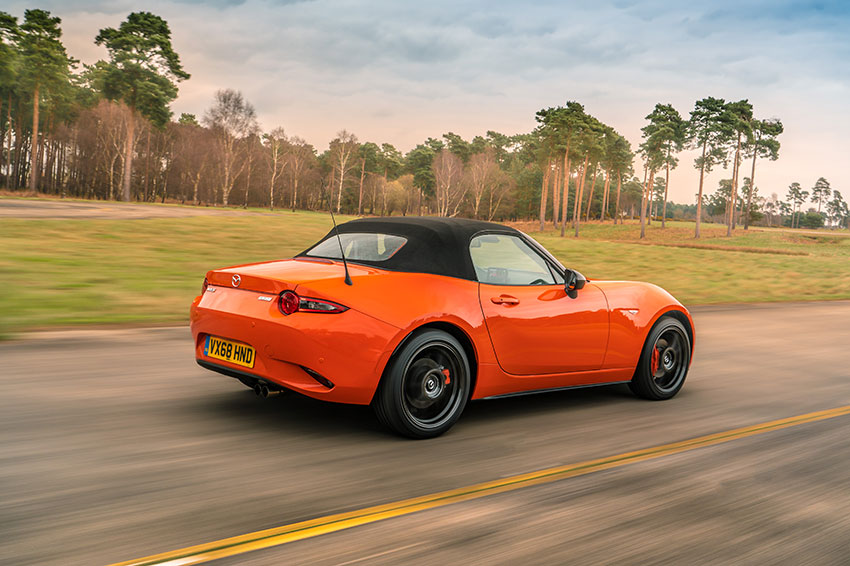 The whole appeal of the Mazda MX-5 boils down to two-seater, wind in your face fun. And that word 'fun' is quickly diminishing in the automotive world – at least on the roads of the UK. There are speed cameras everywhere, and health and safety culture seems to dominate everything. But this little roadster has somehow made it through the last three decades with 'fun' stamped all over it. It reminds us of the cars of yesteryear – those wonderful MGs and Triumph Spitfires. And that's what the Japanese wanted to recreate back in 1989.

I think even Mazda was surprised by how well the MX-5 took off. The car is now recognisable everywhere - and it seems there are as many on track as on tarmac these days. The beautiful thing about the car is that it appeals to everyone. Yes, I've mentioned enthusiasts, but it also attracts people from all genders and walks of life. Got a family? No problem, you can still have solo – or two-up laughs by buying a cheap and cheerful second car – in the form of a used MX-5. Or you can save up for a brand new one – or better still, get your order in for a special edition, like this 30th Anniversary model. Whatever the case, there will be an MX-5 with your name on it somewhere. 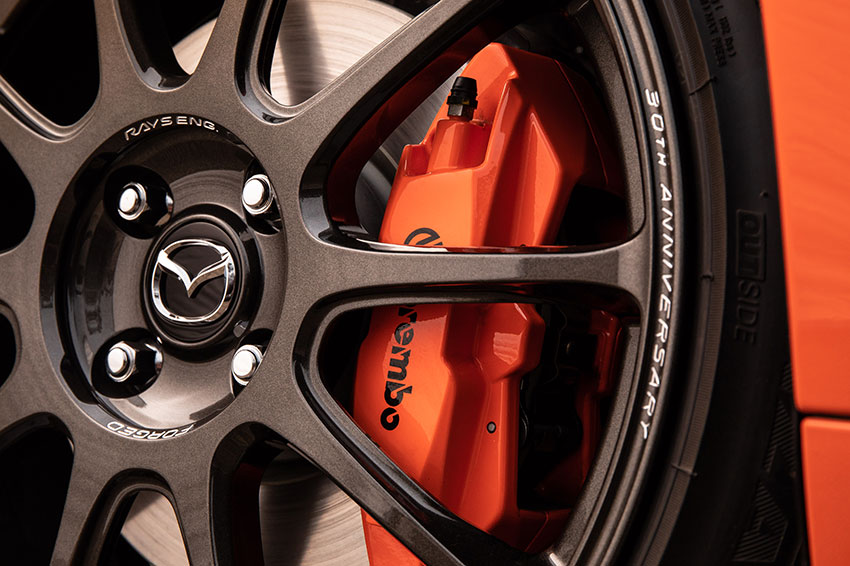 At the media launch of the 30th Anniversary MX-5, Managing Director of Mazda Motors UK, Jeremy Thomson, commented: ‘In the 30 years since the launch of the model, more than 130,000 Mazda MX-5s have been sold in the United Kingdom. This is a sports car that has resounded with enthusiastic drivers ever since its introduction, and four generations later, it's as popular as ever. Along the way, the MX-5 has remained true to the original principle of being a lightweight, affordable, and fun roadster.’

He added: ‘And with its generous equipment levels, unique detailing, exclusivity and bold Racing Orange paintwork, the MX-5 30th Anniversary is the perfect way to mark 30 years of this iconic sports car.’

So, three decades on, the MX-5 has managed to outlive the likes of Oasis, Girls Aloud and Westlife. And over that period, Mazda has sold 1 million units. It’s a real success story because the MX-5 is the best-selling two-seater roadster in the world.

You may be too late to buy a rare 30th Anniversary Edition, but there are many MX-5s to choose from – and, who knows, maybe, just maybe you’ll spot a Racing Orange model on the second-hand market somewhere one day. Whatever the case, if you’ve never driven an MX-5 before, I urge you to do so. It’ll do more for you can possibly imagine.