The Golf has regenerated once again. Jim McGill takes a test drive in Volkswagen’s always-reliable hatchback. 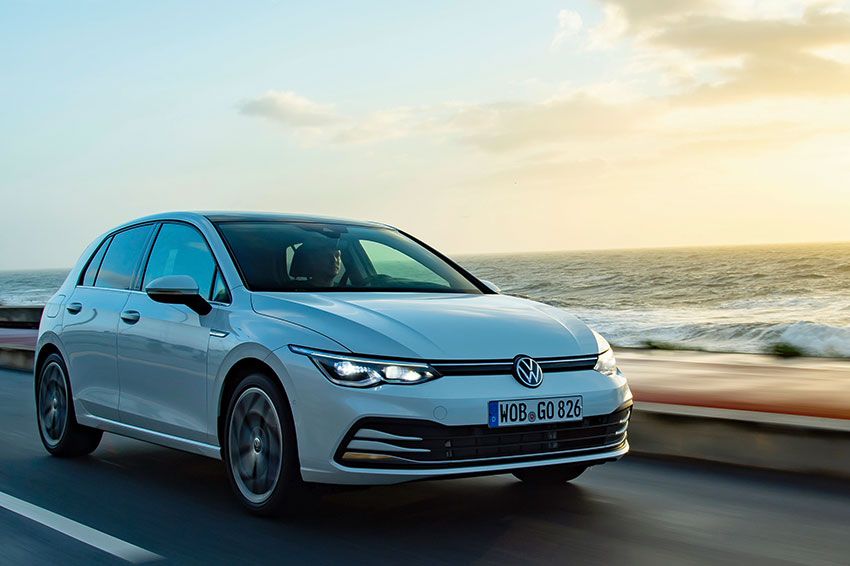 Volkswagen has lifted the wraps from its eighth generation Golf. The car, which is designed to appeal to absolutely everyone, is the blueprint of a normal hatchback. But in this ever-changing new car market, it’s worth highlighting that the Golf isn’t an SUV — which more and more buyers are migrating to — and the Mk8 won’t be available as an EV. That gap will be filled by the new ID.3.

So, will the new Golf be as much of a runaway success as all its predecessors? Remember, since the Mk1 was launched in 1974, more than 35 million Golfs had been sold. To be honest, yes, I think it will. Why? Because despite all the talk about EVs and SUVs, what the vast majority of drivers want is a practical hatchback. And if they can find one with a more high-tech interior and lower running costs than alternatives on the market, then even better.

Like me, you’ll probably be rubbing your eyes, peering closely at the pictures and wondering: ‘Is that really the NEW Golf? Or is that the previous model?’

Are you pulling my leg? 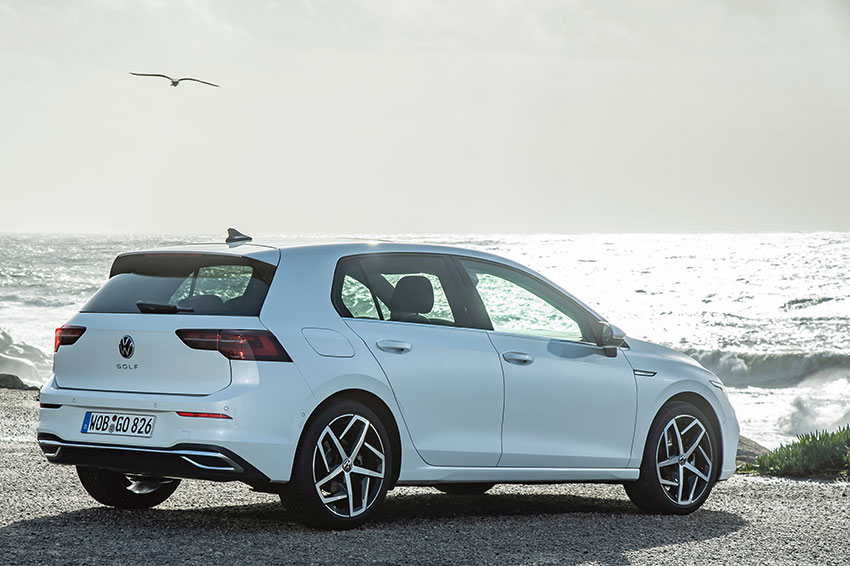 Nope. Even Volkswagen bosses, including design chief Klaus Bischoff, admit the exterior styling is little more than an evolution of the last car, which, to be honest, is no bad thing. It’s under the bonnet and inside the cabin where the biggest, most important changes – including the introduction of mild-hybrid technology – have been made.

First though, let’s examine the outside of the latest Golf. The most noticeable styling change is at the front, where a slimmer grille and new narrow headlights — featuring standard LED tech — give a family nod to the recently launched all-electric ID.3. Note, specifically, the new strip running from the lights to the Volkwagen roundel.

And while the rear-end gets a new raised rear bumper, with the Golf name written out beneath the Volkswagen logo, the designers have also tweaked the side profile, focusing on the more contoured C-pillar. All the external changes are subtle, but that’s one of the principal ingredients that make a Golf a Golf.

So, where are the biggest changes? 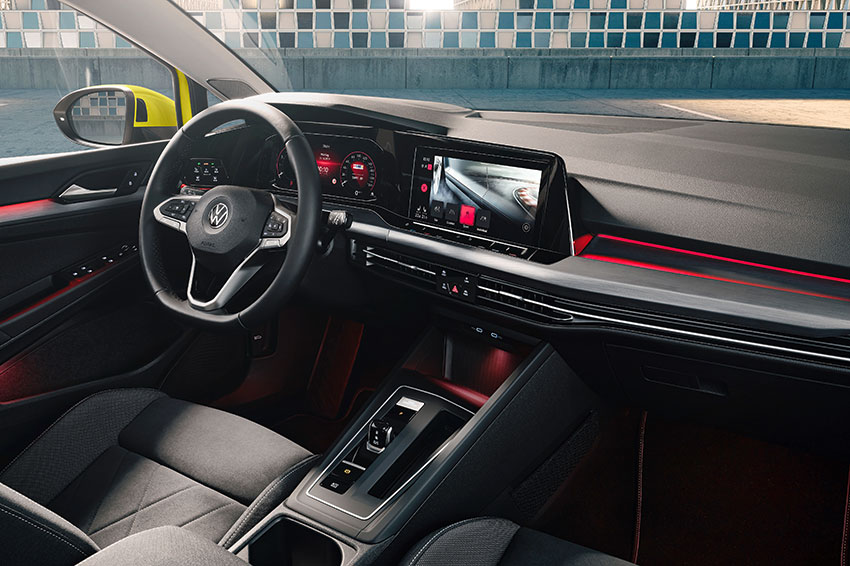 Without question, Bischoff and his team have saved the biggest improvements for the inside. The new cabin is the perfect combination of minimalism and contemporary style, and it pushes the boundaries for the highly-competitive ‘family car’ class. This is a cutting-edge look.

A pair of screens dominate the cabin. The 10-inch infotainment system, as you might expect, features a customisable display which allows the driver to position shortcuts and widgets in the desired positions. Android Auto and Apple CarPlay are both standard, with the latter now operable wirelessly. This touchscreen is paired with a standard 10.25-inch digital cockpit display and an optional windscreen head-up display.

Thankfully, the controls for both the climate and infotainment volume have been integrated into a ‘slider’ located underneath the touchscreen. The optional sunroof is operated by a similar system which is mounted into the roof console.

Any other interesting technology? 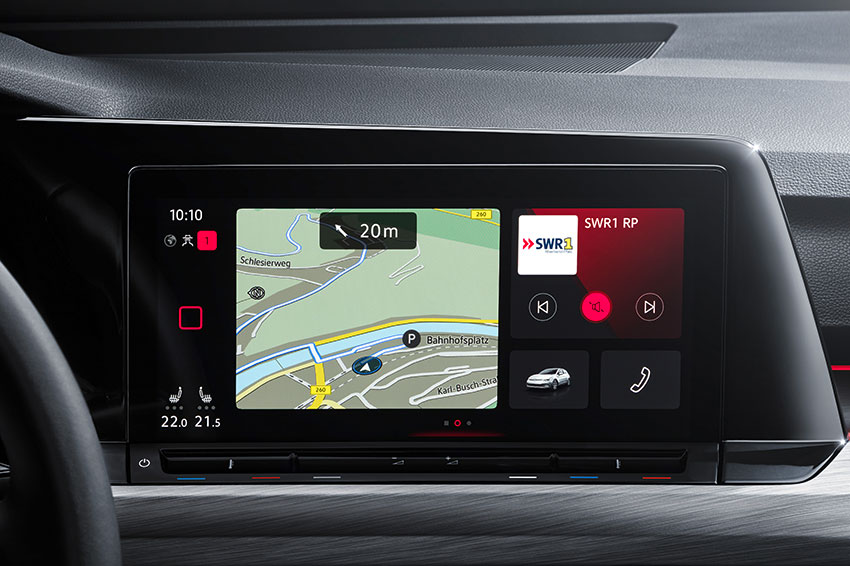 Oh yes. The technology in the latest version of the MIB3 infotainment system also extends to voice control. Drivers of the new Golf Mk8 can call on Amazon Alexa — which is permanently connected to the internet via an eSIM, enabling online music streaming, traffic information and shopping — for advice.

To further streamline the new VW Golf’s interior looks, the upper portion of the dashboard has been designed to appear as if it sits on a ‘table’. And neatly tucked below an indented line sit the air vents. The designers have also reworked the remaining physical controls — operated by touch-sensitive buttons — bundling them together in a higher position closer to the steering wheel and instruments on the dashboard. This approach ensures the cabin not only has much cleaner design lines, but also creates a more spacious feel.

Sitting at 4284 mm long, 1789 mm wide and 1456 mm high, with a wheelbase of 2636 mm, the new Golf is almost identical in size to the old car. Interior dimensions are therefore similar to the outgoing model too, so any additional feeling of space is essentially down to clever design packaging.

Looking for a Volkswagen SUV? Read our T-Cross review.

Has Volkswagen added mild hybrid tech to the range? 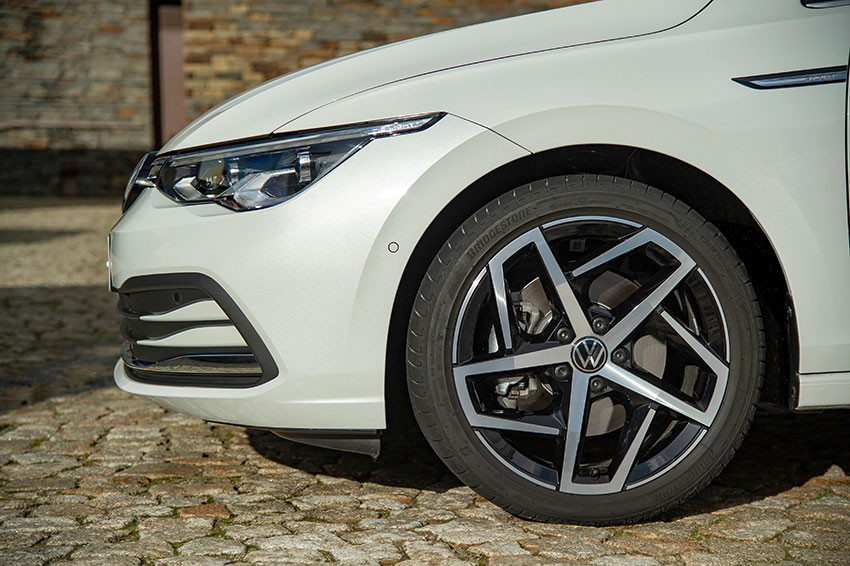 It certainly has. The headline-grabber is the fact the Mk8 gets a mild-hybrid system, combined with a seven-speed auto gearbox. In the eTSI models, the 48-volt electrical system recovers energy which would otherwise be wasted when slowing down, and then redeploys up to 16bhp and 25nm of electric boost under acceleration. Volkswagen claims this will make moving away from standstill much smoother.

The mild hybrid tech is available with both versions — 128bhp and 148bhp — of the 1.5-litre eTSI turbocharged petrol, plus the 109bhp version of a 1.0-litre three-cylinder turbo. In the entry-level 89bhp 1.0 TSI, and models with a manual gearbox, there’s no mild-hybrid tech. However, Volkswagen says its new six-speed unit will help reduce emissions.

There are also two diesels available, delivering a choice of 113bhp or 148bhp from the 2.0-litre engine. Both can be mated to either manual or auto boxes, and claim to produce 17% less CO2 than before. Nitrogen oxide emissions have been slashed by 80% due to the introduction of a new AdBlue delivery system.

Will there be an all-electric Golf? 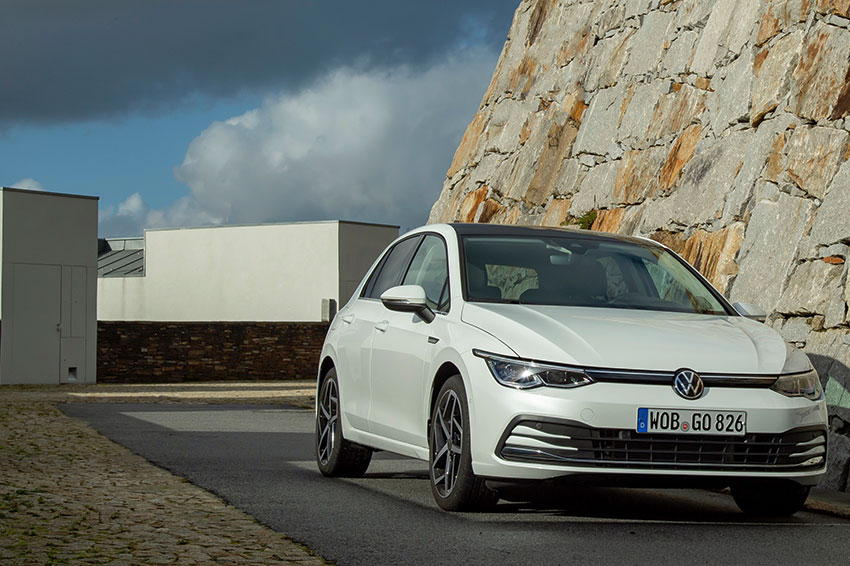 There will be no all-electric Golf in the range — that’s the remit of the new ID.3 model — but there will be a GTE plug-in hybrid. When it arrives next summer, it will, at that time, be the hottest Golf in the range. Power comes from a 1.4-litre TSI petrol engine with an electric motor delivering a combined 241bhp. Energy is stored in a 13kWh battery, providing 50% more capacity than the outgoing GTE.

The Golf Mk8 — which ditches the S, SE, SEL and R-Line trim levels, and replaces them with Golf, Life, Style and R-Line — is due on sale in the UK early next year, with the entry-level price expected to duck below the £20,000 mark, despite the increase in new standard tech.

And what about the GTI and Golf R?

Throughout the second-half of 2020, the range will be further boosted by the introduction of the GTI and GTD models. The GTI will use an upgraded version of the 241bhp 2.0-litre turbocharged engine from the previous model. But we’ll have to wait till 2021 before we get our hands on the R version, and range-topping 400bhp R Plus. 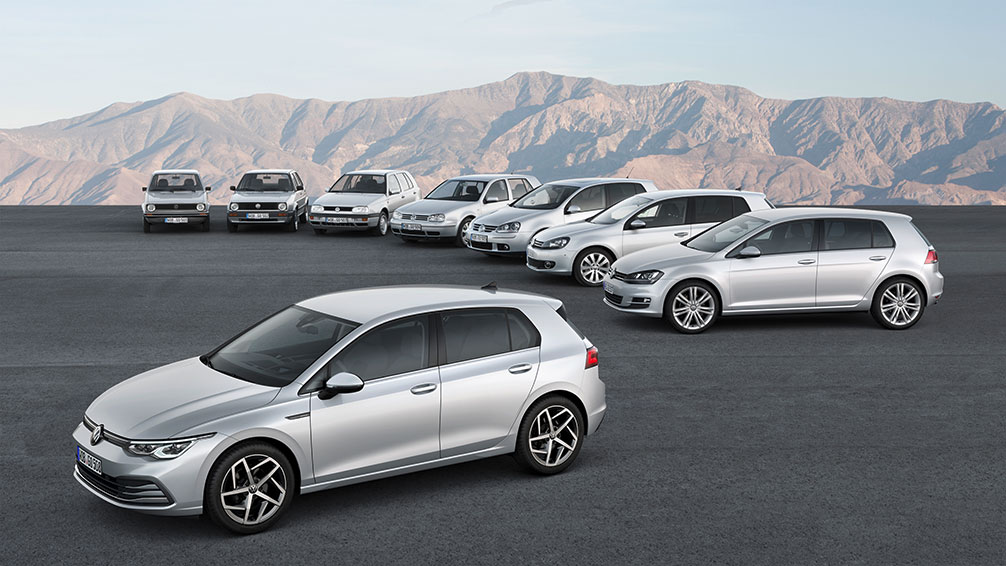