Tim Barnes-Clay takes a look at the latest innovation from ŠKODA. 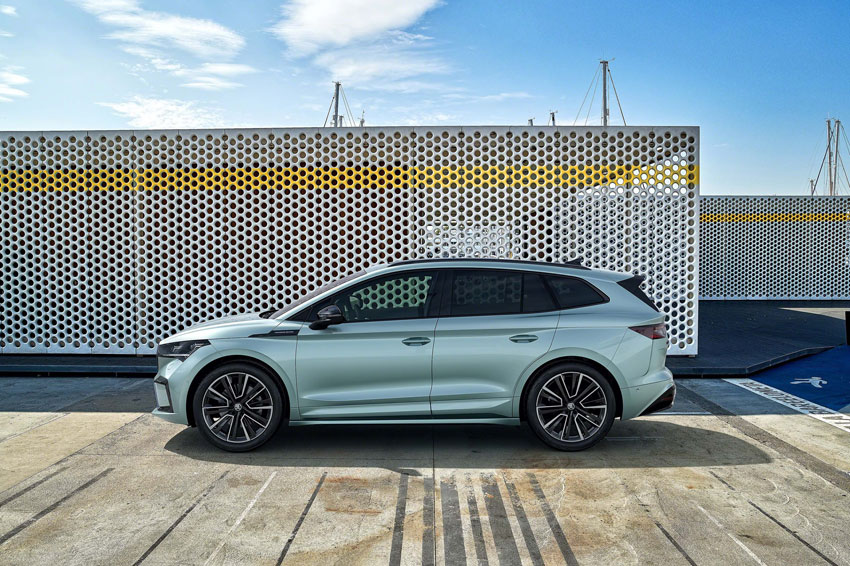 And those who don't, and remember the crass jokes at ŠKODA's expense in the 80s and 90s, are living in the past.

How did this revolution happen? Well, ŠKODA partnered with Volkswagen back in 1991, and by the year 2000, the Czech motor manufacturer was a wholly-owned branch of the Volkswagen Group. Now, the marque trades in well over 100 countries, with 1.24 million ŠKODAs sold in 2019 alone.
The result has been spectacular. You could say Volkswagen has taken ŠKODA from rags to riches, but that would be too critical – after all, ŠKODA is one of the oldest automakers on the planet.

So, what’s next for ŠKODA?

It seems there’s no stopping ŠKODA now, and the brand’s latest news is that its first purpose-produced electric vehicle – the Enyaq iV – will be going on sale at the end of the year. This pure-electric Sports Utility Vehicle (SUV) will be available in the United Kingdom with a couple of battery options, as well as rear-wheel drive and four-wheel drive variants. Pricing is competitive, starting at £33,450 – and that’s not including the UK’s plug-in car grant.

The Enyaq iV 60 is the entry-level car, and for £33,450, equipment is generous. It comprises 19-inch alloys, an infotainment system with a 13-inch screen, dual-zone climate control, keyless go, and rear parking sensors. Road sign recognition, a multi-function leather-wrapped steering wheel and ambient interior lighting are also standard. Inside, the 62kWh iV 60 model is furnished with Loft spec. This includes aluminium decor panels as well as artificial leather and fabric seat facings.

What options are available?

An interior Suite pack can be specified, too. The bundle costs an extra £1,285 and adds piano black decor and leather trim. Alternatively, the Lounge design pack is available for £1,115. This offers grey leather with yellow stitching.

If you want to go bigger, then the Enyaq comes with an 82kWh battery. Known as the 80, this model’s spec includes front parking sensors, a rear-view camera, a heated leather steering wheel with paddles for setting regenerative braking levels and an infotainment system with sat nav. Chrome detailing and 19-inch alloy wheels are also fitted. In addition, if you want a more luxurious interior you can, as with the iV 60, opt for the Suite or Lounge packs. The Enyaq iV 80 costs from £38,950. On top of the stock 60 Loft and 80 Loft Enyaqs, ŠKODA is expanding the range to incorporate a flagship 80 Founders Edition. The spec includes 125kW DC charging, an illuminated front grille, LED headlights and 21-inch alloys. The £49,995 model also has a black leather cabin as standard.

What’s the battery capacity and how fast does it charge? 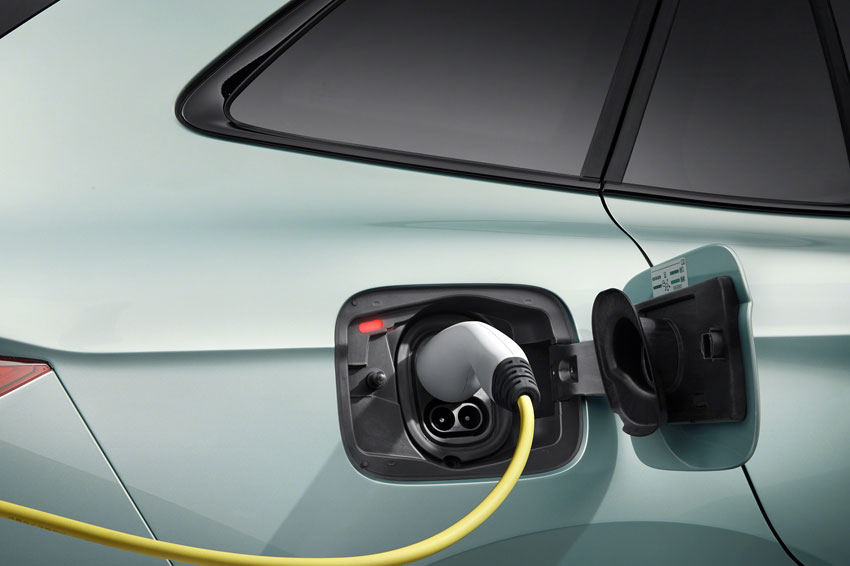 All Enyaq iVs have a DC rapid charging capability of 50kW, but increased 100kW and 125kW DC charge rates can be specified as options. While we’re on the subject of charging, ŠKODA is offering the Enyaq with a trio of charging options. As well as using a regular domestic 230V socket with 2.3 kW AC, it can be charged up overnight, using a 7kW wall box. Depending on the size of the battery pack, the charging process takes between six and eight hours. The iV can also be hooked up to rapid charging points with a capacity of 125 kW. This enables the Enyaq to be powered from 10 to 80 per cent in a mere 38 minutes.

How far can the Enyaq go on a single charge?

When it comes to the all-important range, the basic Enyaq 62kWh model is fitted with a 180PS motor that propels the ŠKODA’s rear wheels via a one-speed transmission. On a single charge, you can expect a range of up to 242 miles. You’ll also be able to do zero to 62mph in 8.7 seconds and go on to a top speed of 99mph. The bigger 82kWh rear-wheel-drive iV produces 204PS and has a range of up to 316 miles. The acceleration is, as you might imagine, quicker, with zero to 62mph arriving in 8.5 seconds. The top speed is the same as the lower-powered Enyaq - 99mph. 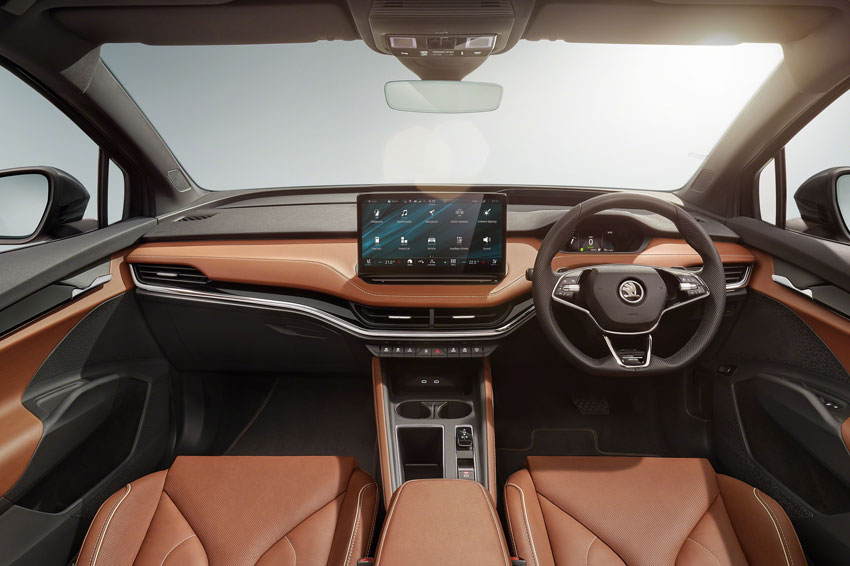 Irrespective of the model, the Enyaq introduces a brand-new era of cabin design. As many people have now come to expect from the marque, all iV versions offer high-tech infotainment and connectivity features. You are shown key information through the 13-inch centrally placed display – and, if needed, a head-up display can be fitted if you tick the options box. Furthermore, an internet connection makes sure that all data is always up-to-the-minute.

Of course, space can be a dealbreaker when it comes to choosing which SUV to buy, so you’ll be pleased to know that the Enyaq doesn’t disappoint. Measuring 1,877mm wide and 4,648mm long, the iV delivers the kind of practicality and space that’s perfect for a family of five.

Due to the model’s pure electric platform, the Czech carmaker's designers have been able to totally reimagine its interior construction. With a small motor attached beneath the boot and the traction battery contained in the floor of the load area, the Enyaq has a cabin free from the restrictions associated with a conventional internal combustion engine vehicle. As a result, you and your passengers can take pleasure from the car’s roomy interior and flush floor. The boot will also impress with its cargo capacity of 585 litres.

When is the Enyaq iV available? 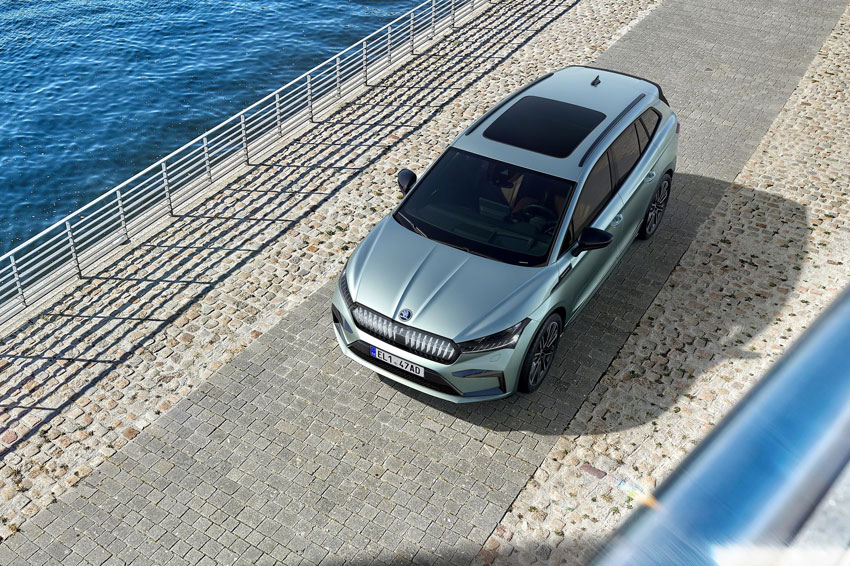 The Enyaq iV will be available to order soon, with first deliveries of the models mentioned above expected in the UK in Spring 2021. After that, a more powerful 80X iV with four-wheel drive will come on to the market. That will be closely followed by a vRS model - the first all-electric ŠKODA to sport the coveted vRS emblem. This will have the same powertrain as the 80X, but a hike in power is promised, and the word is that this flagship model will be able to do the zero to 62mph sprint in just 6.2 seconds. Both four-wheel-drive iVs will achieve up to 286 miles on a single charge.