The top 10 most expensive registration plates

We take a look at the most expensive private registration plates ever. 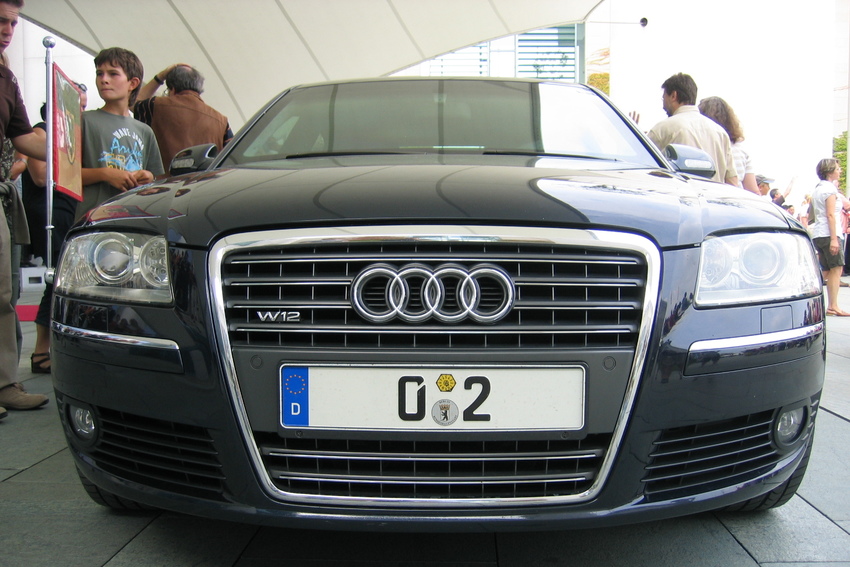 This Audi A8 sometimes used by the Chancellor of Germany Angela Merkel, has license plates 0-2

It is clear in recent years that consumers want products they buy to be personalised – making them like no other of its kind, and individual. When it comes to cars, there’s been a growing popularity of sticker decals, and building the car to fit the exact needs and wants of the consumer, on top of that the number one car accessory has always been the private or personalised registration plate – not eye lashes (LOL). Here, we look at the ten most expensive registration plates purchased in the UK.

This plate was sold for £170,000 by the DVLA and was purchased in 2009, by an unknown bidder by telephone at an auction in Northamptonshire. Apparently its value is down to how few digits appear in the registration plate and its rarity due to this.

This registration plate was sold for £231,000 in 1993. It was allegedly bought by an Arab Sultan. It is rumoured to have been a highly emotional battle of an auction ending in a rapturous applause. Allegedly the plate now sits on a black 1995 Bentley or similar.

'1 RH' sold for £247,000 in 2006. Businessman Robert Harverson from Surrey paid 30 times the original estimated value for the plate because it featured his initials. One of 10 private plates he owned at the time it was sold to him by the DVLA for more than 30 times the reserve price. It’s now placed on a black, 2013 Mercedes-Benz SL63 AMG Auto Convertible.

This plate was sold in 2006 for £254,000 by the DVLA at auction to an unknown bidder. This plate spells out the popular Indian and Sikh name – ‘Singh’. It surprisingly fetched two and a half times the price of S1 NGH, which is technically closer to the name. The plates apparently featured on a Rolls Royce Phantom Drophead in a music video by Punjabi singer-songwriter Jazzy B in 2008.

This plate sold for £285,000 and is owned by Russian billionaire and Chelsea FC owner Roman Abramovich. The number plate was once used on the pope mobile, during a visit by Pope John Paul II to Ireland in 1979. The plate was reportedly destined for his blue 1993 Rolls Royce Corniche IV Convertible.

'M 1' was bought for £331,000 in 2006 by mobile phone business man Mike McCoomb who said this was a gift for his 10-year-old son – lets hope he held off use of the plate until he can legally drive! The plate was sold by Bonhams at the Goodwood Festival of Speed, to raise money for the Tatton Park Charitable Trust. The plate was originally issued in 1902 in Cheshire, adorning a 1900 Benz car at Tatton Park.

This plate sold for £352,000 in 2009. The first thought would be that this plate refers to boy band One Direction, but we know none of these young boys spent such a large amount on a number plate. London-based property developer Nabil Bishara purchased these digits for his wife’s Bentley. It was purchased at a DVLA auction in Warwick.

This plate was sold to an unknown bidder in 2008 for £404,000, who apparently displays the digits on an old ŠKODA! Apparently Scotland’s first number plate it dates back to 1903. Its first owner was the forward-thinking John H A MacDonald, the lord Justice Clerk of Scotland. It was in the family until it was sold in 2008 by Bonhams auction house at the Goodwood Revival Sale.

'F 1' sold for £440,000 in 2008. This plate previously held the number one position when it was purchased by businessman Afzal Khan and took pride of place on his McLaren-Mercedes SLR. In 2014 Mr Kahn was reportedly offered six million pounds for the plate, which he turned down. It is apparently now adorning a Bugatti Veyron.

This plate sold for a record-breaking £518,000, the most expensive registration ever sold by the DVLA to Ferrari dealer John Collins. This plate is apparently now sitting on a Ferrari 250SWB worth £10m, and once owned by great musician Eric Clapton. Its value is down to its association with the Ferarri models 250GT, 250 TR and 250 GTO. One of the most valuable cars ever built. Mr Collins apparently purchased 500FER at the same time, which was a snip at £3000.