Cars to feature in SPECTRE's car chases, due for release October 2015 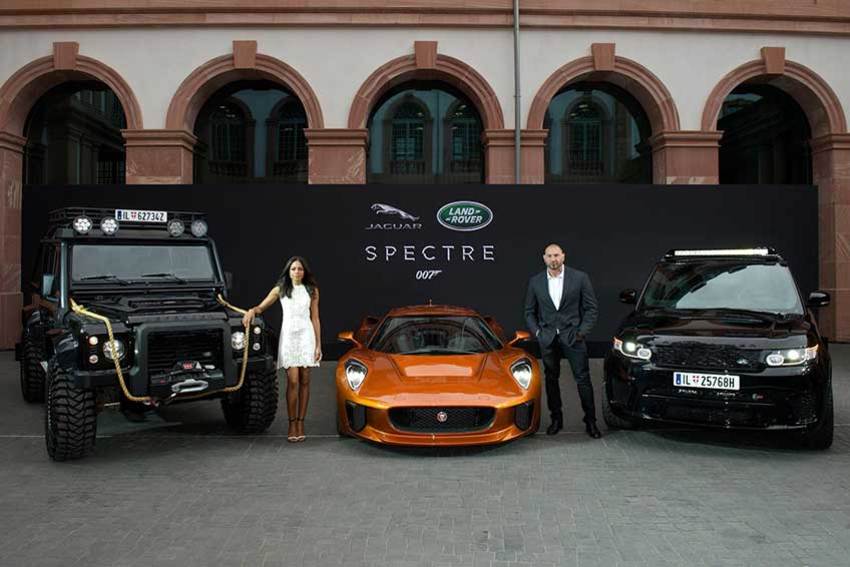 SPECTRE features Daniel Craig as Bond for the fourth time; the film sees his character face the global criminal agency, SPECTRE. There will be several encounters that naturally comprise multiple car chases. What would a James Bond film be without a high-speed car chase or three? Here’s a selection of the cars you can expect to see. 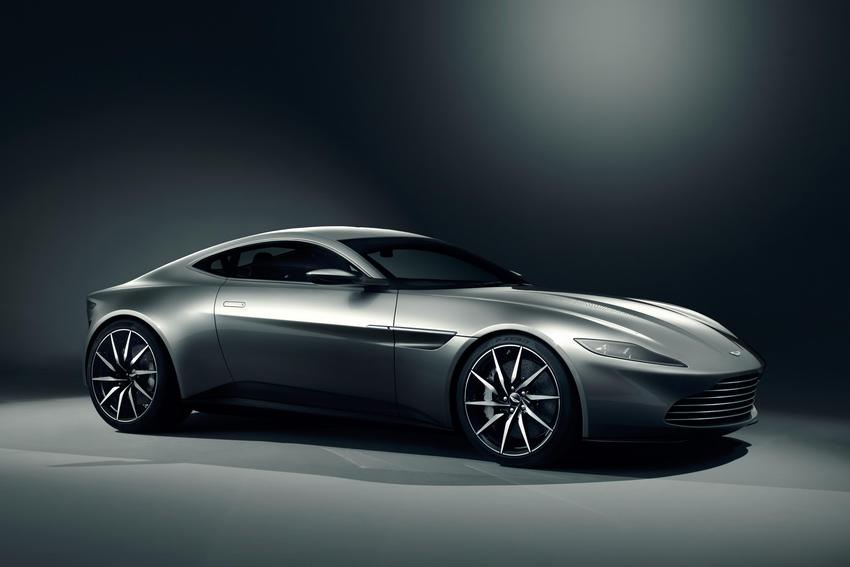 Bond’s car for the 24th film in the franchise was revealed to be an Aston Martin DB10 in late 2014. Marek Reichman, Chief Creative Officer at Aston Martin, created the design and Director Sam Mendes also had input in the concept car. Aston Martins have become synonymous with Bond; this will be their 51st year in partnership that started with the DB5 in Goldfinger in 1964.

Only ten units were built at Aston Martin’s Gaydon headquarters in Warwickshire, all of which were in the film. It’s been said that the DB10 will not be run into production however it is said to reflect the direction of the brand’s future DB releases. Seven of the bespoke DB10s were destroyed during filming, reportedly worth £24m.

Under the bonnet there is said to be a V8 engine with the 6-speed manual gearbox that Aston Martin usually features alongside their V8 engines.

The DB10 is a thing of beauty, with its smooth classy design. The chassis is based on the VH Platform, albeit modified. Displaying similarities to the D9 yet with a shorter rear end and creases that are sharper and more enhanced. The headlights are different too, featuring a new design next to the wider but still recognisable Aston Martin grille.

One scene filmed in the moonlit streets of Rome features the DB10 being chased by a Jaguar C-X75 that was first unveiled as a concept at the 2010 Paris Motor Show. 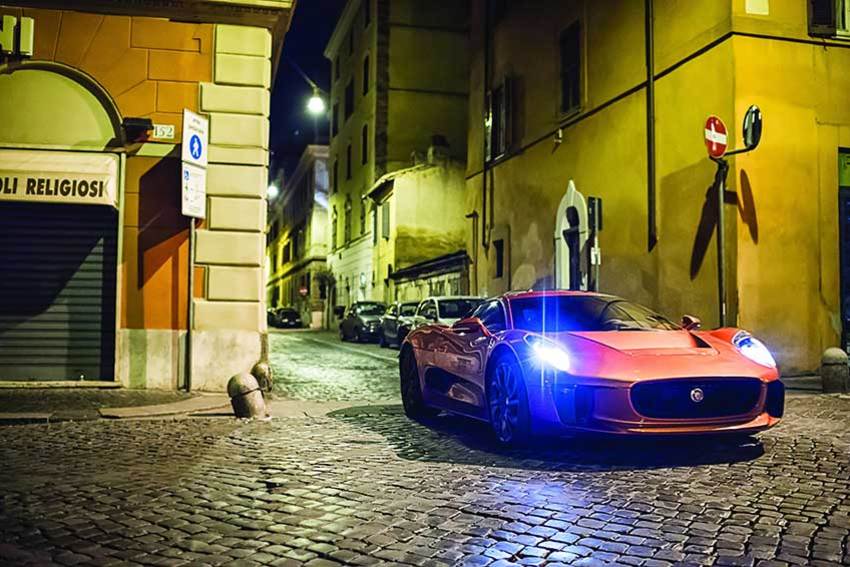 After making the decision in 2012 not to produce the C-X75, Jaguar has partially resurrected the supercar for the purposes of the film. A hybrid two-seater, this concept car boasts a composite monocoque chassis, a first for Jaguar, making it lighter on the road. The sweeping design, aerodynamic profile, oval grille and smooth headlights certainly make an impression.

It’s been rumoured that the supercar was fitted with a 5.0-litre V8 engine with 524bhp to offer the power that’s needed to compete with the DB10 on the streets of Rome. As opposed to the hybrid version the C–X75 was originally built with.

The film was shot in Mexico, Rome and the Austrian Alps and so the vehicles needed to suit their surroundings. 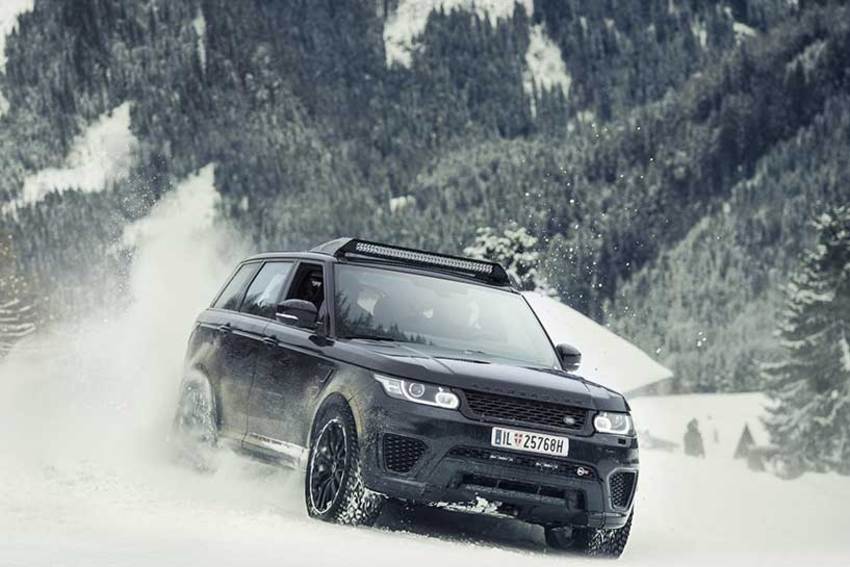 Land Rover’s Special Operations team worked together with the film’s producers to create the perfect vehicles for the terrain of the Austrian Alps.

The all-black Range Rover Sport SVR was designed especially for the chase scenes set in the snow. Modifications to the already powerful vehicle included the addition of a roll cage, increased power and added fuel cells. 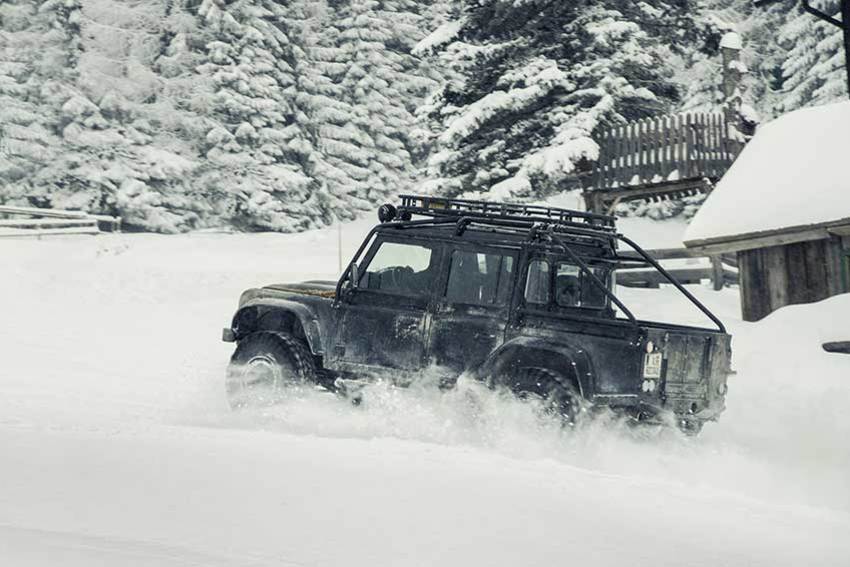 SPECTRE is due for release in UK cinemas on 26th October 2015.