The first generation Audi A1 firmly established itself as the ultimate supermini - the essence of democratic down-sizing. In 2015, Audi updated the car and made it smarter, more efficient and better-equipped. It's this version we check out here as a potential used buy. It's a seductive package for small car buyers.

You don't expect to see a premium badge in the supermini segment - or a car of this quality. Though Audi's two key rivals, BMW and Mercedes, do make very compact small models, they do so using separate brands, BMW with MINI and Mercedes with smart. The A1 though, is unashamedly an Audi, thoroughly imbued with Vorsprung durch technic and pretty much all the quality you'd get with one of the company's larger vehicles. It took the Ingolstadt maker quite a while to figure out how to manage this in a small car at prices not too far removed from the supermini norm. The company's first attempt, the Audi 50 of 1974, wasn't different enough from the MK1 model Volkswagen Polo it was based upon. In contrast, the hi-tech aluminium-bodied Audi A2 of 2000 was too much of a departure from convention, quirky and over-complicated. All buyers really wanted was something much more straightforward: a small car with an expensive feel. It could share mechanical parts with lesser Volkswagen group models but it needed to be properly premium. The way this model is. The opportunity to create it finally arrived in 2009 with the launch of Volkswagen's fifth generation Polo. Here at last was the perfect platform from which to build a really credible entry-level Audi and sure enough, the first three-door production A1 models were launched a year later. A five-door Sportback version was added to the range in 2011 and from then on, the brand took every opportunity to emphasise its smallest model's technological superiority over every other supermini-sized competitor. You simply didn't expect to find things like 7-speed dual-clutch automatic transmission or cylinder-on-demand technology on this class of car. Or the option of a hot hatch version with 4WD and as much as 231PS beneath the bonnet. By 2015 though, it was time to update the strong-selling A1 package with smarter looks, greater efficiency and extra equipment. In this form, the car sold until mid-2018, when a second generation design (offered only in five-door Sportbnack form) was announced.

The A1 is more than merely a scaled-down version of the larger A3. The Polo parentage isn't obvious, the wheels set more widely apart, the body riding a little lower. It's all neat, confident and very classy, especially if you get a car whose original owner opted for the roof hoops that could be specified in contrasting colours. As for the changes made to the post-2014 improved version, well you'd need to be very familiar indeed with the A1 model range to notice them. The enhancements mostly centred upon a front end that featured revisions to the air intakes and the foglights, as well as revised bumpers with more powerful contours that made the facelifted car 19mm longer than the original design. More overt were the updates made to the wider, more distinctive Singleframe front grille flanked by restyled headlights that were able to incorporate hi-tech xenon plus technology. Enter in through the long doors and you'll discover what you probably will have expected to find: the smartest cabin in the class, enhanced on most versions of this improved model with extra chrome and high-glass black detailing. There's a centre console that's supposed to be styled like a ship's stern and a dash apparently modelled on the shape of an aircraft wing, the fascia section decorated with large circular air vents designed to resemble jet engines and which original buyers could trim in personalisable colours. The knurled metal heater controls are particularly smart and above these, you might expect to find the kind of centre-dash colour infotainment display that's becoming increasingly common in modern superminis but instead, in an up-market touch, this is secreted away in a fold-out panel on top of the fascia. It doesn't glide up electrically as it would on one of Audi's larger models but it's still one of the features that makes this cabin feel like that of a much more luxurious car. Access to the rear in the Sportback variant is obviously aided by a longer roofline, but you shouldn't get your hopes up too high with regard to the potential space inside. This is after all, still a supermini measuring under 4m in length and the wheelbase of the five-door body style remains unchanged from that of the alternative three-door model.

Most A1 owners we came across in our survey seemed very satisfied, but inevitably there were a few issues with some cars. One owner found that his 1.4 TFSI model kept losing power through the battery due to poor grounding. He mentioned also that the stop start system was very unreliable (a new fuel pump had to be fitted). And struggled with a horrible creaking sound through the forward bulkhead (which required a new engine mount). This car also had a constant rattling from underside, a power steering failure and an undue appetite for engine oil. Other owners we found reported issues with the Bluetooth connection, the emissions sensor, the EGR valve, horn failure, sliding seat failure, power steering pump failure, airbag failure, number plates falling apart and funny smells from the air con. Look out for all these things on your test drive. In one instance, an owner lost all drive in his S tronic TFSI model. The dealership found the fault code and diagnosed that the "mechatronic" gear selector had gone, which required a new £6K auto gearbox.

You may, like us, have certain expectations when it comes to driving this car. After all, it's based on a Volkswagen Polo isn't it? Which means it'll ride well and feel very competent but really lack a bit of fizz. Not the sort of supermini you'd take out for a drive just for the fun of it. Sometimes though, it's refreshing to be proven wrong. No, there isn't the go-kart chuckability you get from the start in a MINI but it's a genuine surprise just how talented the chassis is once you start to press on a bit. And unlike a MINI, this Audi doesn't force its sporty pretensions on you when you simply aren't in the mood: when it's pouring down with rain, the road ahead's festooned with speed humps and you just wish you were in something bigger and more comfortable. In an A1, you'll feel as if you are, this car offering an air of refinement and sophistication that's still unmatched in this class. There's no magic formula here; just sound basics from the very well developed Polo platform. That's been matched to a sophisticated range of engines. The facelifted line-up kicked off with a 95PS 1.0 TFSI petrol variant (which replaced the previous 1.2 TFSI unit). A good all-rounder in the range is the 1.6-litre TDI diesel, which in this facelifted guise had its power raised from 105 to 116PS. For much the same sort of money that you'd pay for a top S line-spec 1.6 TDI model, you could also get yourself the cleverest petrol version of this car, a 125PS 1.4 TFSI variant with 'COD' or 'Cylinder on Demand' technology. At the top of the range sat the potent 2.0 TFSI S1 hot hatch. Whichever version you choose, in an urban environment, the light controls, well-assisted steering, dinky dimensions, tight turning circle and decent all-round visibility mean that an A1 is simple to drive, simple to use and simple to park. The perfect shopping car indeed for someone who wants to leave something larger and more expensive tucked safely away at home in the garage.

If you've ever wondered just how much style and luxury is really possible in a really small car, then it's worth trying one of these. In distilling the essence of 'Audi-ness' into something this compact, the German brand set this A1 apart in the supermini segment, offering a balance between sportiness, quality and comfort that rivals are still struggling to match. True, ground-breaking technology wasn't on the agenda here, but there's a place for that and it probably isn't in this very price-conscious sector of the market. What's more important is that if you climb out of an expensive A4 or A6 into an A1 costing half as much, the feeling is very much the same That's even more the case with this improved post-2014-era model, with its smarter finish and hi-tech Audi connect infotainment options. All right, so in overall terms, the revisions made to this supermini weren't especially far-reaching, but then they didn't really need to be. There's nothing else in this segment from this era that's quite as polished and premium. The A1 then, is an expensive-feeling little car that for the canny secondhand buyer, may now be just about affordable. A tempting option then. 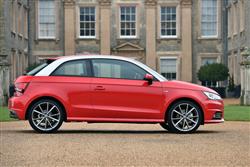 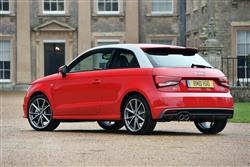 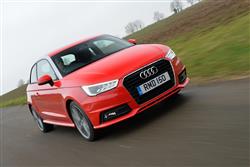 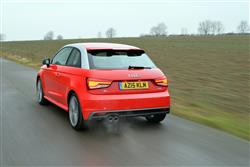 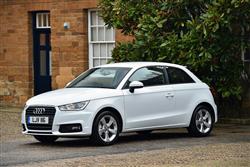 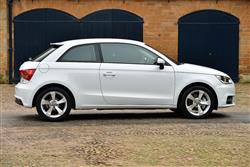