Thinking of buying a diesel-powered Audi A3? Don't, until you've considered the clever 1.5 TFSI Cylinder on Demand '35 TFSI' petrol version. Computer technology really has brought the petrol engine to the point where it's nearly diesel-frugal. Jonathan Crouch reports.

Most Audi A3 buyers choose diesel power. But these days, they don't necessarily have to. The A3 35 TFSI features a modern turbocharged 1.5 TFSI petrol engine that features a 'COD' cylinder cut-off system which means that when cruising, it'll run on two rather than four cylinders. The result? WLTP-rated Economy of up to 42.2mpg on the combined cycle, yet ths A3 has the ability to nip to 62mph in 8.1 seconds.

Wanting to have your cake and eat it is usually asking a bit much. Especially when it comes to cars. Take the desire for the refinement and cheaper green pump fuel of a petrol model. With the same frugality you'd get from a black pump diesel. Will it ever happen? Cars like Audi's A3 35 TFSI CoD model make you believe that it just might. OK, so the name's a bit of a mouthful but the technology's very clever indeed. 'CoD' stands for 'Cylinder on Demand', this acronym your first pointer to the fact that this is a car with a trick or two up its sleeve.

This engine is a 150PS version of Audi's 1.5-litre TFSI powerplant but features a clever piece of engineering on the camshaft. Basically, the second and third cylinders of this four-pot engine are shifted to a cam profile which doesn't activate the valves under low and intermediate loads and when coasting. This can occur at any point between 1400-4000rpm. Give the throttle or brake a good prod and it reverts to firing on four. There are manual and S tronic auto transmission options. It's actually devilishly hard to detect when it's operating because you're normally just tickling along. The central display screen can give you the nod or, if you've got a good ear, you can hear a slight change in engine timbre. It's certainly quick enough, managing 62mph from rest in 8.1 seconds, which used to be the preserve of a respectable hot hatch. Aside from the smart engine tech, the A3 35 TFSI feels remarkably conventional. The Volkswagen Golf-derived underpinnings work well enough, and weight distribution is remarkably evenly spread, front-to-rear. Combined with short overhangs and the latest generation Electronic Stability Programme (ESP) with electronic axle differential, this makes for safe and predictable handling. You can drive it really hard and revel in its faithful responses, knowing that it's on your side. Some sports hatches might offer a little more in feedback, but it would take a very well driven hot hatch to put distance between it and a well-driven A3 35 TFSI on a twisty road.

Exterior changes to the A3 over recent years have been slight but the front still looks purposeful, courtesy of sharp lines for the familiar broad Singleframe grille. The headlights are flat, with distinctive outer contours and can be ordered in Matrix LED form, so they are significantly brighter and constantly adapt themselves to avoid dazzling other road users, plus of course they never need to be dipped. Equally subtle styling at the rear aims to accentuate the width of this car - with the horizontal illuminated graphics of the rear lights and the separation edge above the redesigned diffuser. Inside, the 'Virtual Cockpit' instrument display used in the TT and other pricier Audis is available in this one as an option. This displays the most important driving-relevant information in high resolution on a 12.3-inch diagonal TFT screen. The driver can switch between two views by pressing the "View" button on the multifunction steering wheel. In addition, the menu structure that works the centre dash MMI infotainment screen has been redesigned and is now more intuitive. Otherwise, everything is pretty much as before, with classy materials and strong build quality. The five-door Sportback hatch has a 365-litre boot - and there's still the option of saloon or Cabriolet bodystyles if you want them.

Pricing for the A3 1.5 TFSI starts at around the £26,000 for the five-door Sportback body style most will want. To put that into perspective for you, a comparably performing A3 35 TDI diesel would cost you around £1,500 more and only take you around nine miles further on each gallon of more expensive black pump fuel. The key option with this current model is the clever 'Virtual Cockpit' system replacing the conventional instrument dials with an eye-catching 12.3-inch TFT display. But of course, there's much else to select from. As for infotainment, well Audi reckons that this current A3 sets fresh standards here. An 'MMI radio plus' set-up with an electrically extending 7-inch diagonal monitor is standard, while the 'MMI navigation' system is fitted from 'SE Technik' trim upwards. Go further and specify the 'MMI navigation plus with MMI touch in conjunction with the Audi connect' package (what a mouthful!) and you can have many online functions in your A3 at high speed via the super-fast LTE standard. They include, for example, navigation with Google Earth and Google Street View traffic information in real time, as well as practical information on parking, destinations, news or the weather. There's also a free 'Audi MMI connect' app that enables other services, such as online media streaming and transfer of a calendar from a smartphone to the MMI. Mobile phones with iOS and Android operating systems can now be connected with the car via the standard Audi smartphone interface.

Fuel economy is impressive. According to Audi's figures, this A3 1.5 TFSI will return up to 42.2mpg on the WLTP cycle in manual form and 124g/km of NEDC-rated CO2 - that's on 16-inch wheels. Go for the S tronic auto and the figures are 42.2mpg and 117g/km. In comparison, an equivalently performing A3 35 TDI 2.0 TDI diesel S tronic manages 50.4mpg on the combined cycle and 117g/km of CO2. As for depreciation and running costs, well independent specialists CAP Monitor reckon that for mainstream variants, these will be class-leading, a fraction in front of BMW and Mercedes and far ahead of premium compact class wannabe models like the Volvo V40 or the Alfa Romeo Giulietta. Buy, say, an entry-level A3 35 TFSI now and three years down the road it will still be worth around 46% of what you initially paid for it. That's what makes it worth paying the extra for this car over, say, a well-equipped Focus or Astra, both of which have closed the gap in terms of quality in recent years. As long as you can afford the initial outlay and don't go mad on the options list, the Audi is going to work out cheaper to own. Further assistance here is provided by a fixed price servicing plan that can cover you for between three and five years.

For years now, petrol engines have been getting more and more efficient. It's taken Audi though to bring that to the fore with their clever Cylinder on Demand technology. Most A3 buyers will ignore it and blindly tick the box for another TDI diesel model, but for the few who take the time to find out more about CoD, this could be a very clever choice. You can get this same engine in a smaller Audi A1 but the saving over this A3 isn't very great. We'd council you to choose the bigger car. Having said that, the same engine is also available in a Volkswagen Golf and a SEAT Leon for less. But then, an Audi is an Audi. If you've set your heart on one, then very probably, nothing less will do. And if that's the case, then you can't ignore this neat and appealing package. 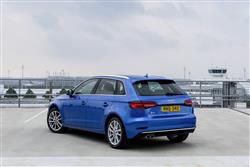 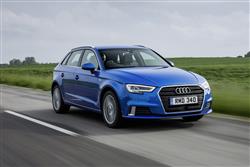 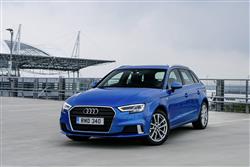 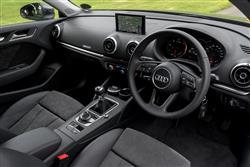