Back in 2015, Audi's A4 Avant needed to up its game in the face of tough competition from BMW's 3 Series Touring and the Mercedes C-Class Estate in the image-conscious mid-sized executive estate sector. In fifth generation B9-series form, it did. The styling of this MK5 model may be evolutionary but underneath were serious revisions that challenged rivals harder than ever. Let's check out the original version of this B9 A4 Avant model as a used buy.

It's hard to be successful in the mid-sized executive market sector without a credible estate body style - ask Jaguar or Lexus. That is, after all, what an increasing number of buyers in this segment want. Back in 2015, Audi reckoned to have nailed exactly what they needed with this car, the fifth generation 'B9'-series A4 Avant. Buyers have been able to choose the A4 in both saloon and Avant estate guises ever since this model line was first launched back in 1994 and in 'B9' MK5 form, the A4 station wagon variant, like its four-door stablemate, turned out to be lighter, sleeker and cleverer than ever before. It was even a little more spacious inside too. All of this was important given this car's need to face down direct competitors who by 2015 had absolutely transformed themselves. In 2014, we saw the introduction of the fourth generation Mercedes C-Class Estate, rejuvenating the Stuttgart brand's competitiveness in this segment just in time to sustain its sales against a revitalised version of BMW's sixth generation 3 Series Tourer. These were the two models primarily targeted by MK5 A4 Avant when Audi launched it here early in 2016. Contrary to the impression offered up by its appearance, this was actually one of those rare things, a genuinely new car. Over 90% of it had been completely re-designed, while the rest had been fine-tuned and the result was a package of far-reaching improvements. Many of these were made possible by the headline change, the adoption of a lighter, stiffer and cleverer 'MLB Evo' chassis that made the most significant contribution to the massive 110kg weight saving this model enjoyed over its predecessor. That made this car much more economical and over 25% cleaner than it was before. And Audi promised that it would also make this A4 Avant faster and sharper to drive too. Certainly the A4 needed to improve its dynamic repertoire. This MK5 version was after all, in 2015 the only remaining volume mid-sized executive model without an enthusiast-orientated rear wheel drive set-up, so had to provide driving satisfaction in other ways. The freshly-developed five-link front and rear suspension set-up helped here, with optional adaptive damping also on offer. So did the rejuvenated engine range which offered revolutionary combustion technology to TFSI petrol buyers. Plus there was plenty of optional hi-tech cleverness; quattro 4WD, sophisticated Matrix headlamps and an Adaptive Cruise Control system that at low speeds will even drive the car for you. Add in segment-leading connectivity and, as ever, the classiest cabin in the sector and you've potentially a very strong proposition indeed for the used car buyer. The original version of this 'B9'-series MK5 A4 Avant sold between 2015 and 2019, when it was then replaced by a significantly facelifted version. But it's the 2015-2019-era car we look at here.

Audi believes firmly in evolution rather than revolution and if proof of that were needed, then this fifth generation A4 Avant provided it. The lines were sharper, the stance lower and the shape a little bolder but the changes were all very subtle, in line with the need to protect the values of previous models. To be fair, mainstream rivals show equal aesthetic restraint in their volume guises and, as this car tried to do, attempt instead to emphasise elegance, poise and precision. Like its saloon counterpart, this MK5 Avant estate used the Volkswagen Group's hi-tech MLB Evo platform to offer buyers a slightly larger car than before. Time to get specific about the advantages of this Avant body style. For a start it looks pretty classy, with smart aluminium roof rails that garnish a class-leadingly slippery 0.26Cd drag factor. At the back, a sharp-edged upper crease sits above tail lights that feature a multi-faceted 3D design. They're illuminated on upper-spec variants by no fewer than 48 LEDs that create a distinctive night time signature. Avant estate models all get a standard electrically-operated tailgate. Raising the tailgate reveals the way that this MK5 A4 Avant model's extra 26mm of length freed up 15-litres more boot space than was offer in the previous MK4 design, the total rising to a class-leading 505-litre figure. That's 25-litres more than you'd get from the boot of the saloon model and, more significantly, 10-litres more than you'd get in an equivalent BMW 3 Series Touring from this era and 15-litres more than you'd get in a rival Mercedes C-Class Estate from this period. We were also surprised to find that there's more room here than you'd get in an equivalent Ford Mondeo Estate, though a boxier Volkswagen Passat with this body style would inevitably give you much more room. A4 Avant buyers needing more space will value the versatility of a 40:20:40 split-folding rear backrest, the centre part of which is very useful if you need to carry longer items like skis. Flattening the seat reveals up to 1,510-litres of space. There's no additional carriage capacity beneath the boot floor, but that's because this Audi provides you with a spare wheel, rather than one of those irritating tyre inflation kits. As ever though with an Audi, it's the passenger cabin that'll really sell you this car. The Ingolstadt brand isn't as far ahead of its rivals as it used to be in this regard but this remains the defining cabin in its class from this period, with surprising headroom, a wraparound design and a premium feeling of space and safety. The optional 'Virtual Cockpit' that many original buyers chose replaces the entire instrument binnacle with a 12.3-inch LCD colour monitor and has a layout that's fully digital and customisable, with smart 3D graphics and highly detailed effects. Anything this set-up can't tell you will almost certainly be covered by the slimline MMI infotainment display that dominates the top of the dashboard. It's 7-inches in size on standard models - or 8.3-inches if you get a car whose original owner opted for the top 'MMI Navigation Plus with MMI touch' system, with its crisp 3D maps and responsive Nvidia graphics. In the rear, you ought to notice the benefit of the extra 12mm of wheelbase length this fifth generation model enjoys over its predecessor. Audi claimed at the launch of this model that there was 23mm more legroom in the back than there was before but to be frank, it doesn't feel that much bigger.

Most owners in our survey seemed happy. The most reported faults related to interior trim and non-engine electricals. Look out for bodywork scrapes and kerb damage to the large alloys. We've had some reports of issues with wear to the side bolsters of the leather seats, as well as squeaking front brake pads, so it's worth looking out for both of those. There were a few issues with the car's infotainment system, with phones not connecting properly and flickering screens being the main problem. Rattling parcel shelves and buzzing interior trims were also reported. The DSG automatic gearbox should be checked to make sure it's had a regular oil and filter change, as should the quattro four-wheel-drive system. Many A4 Avants will have been company or lease cars and, as a result, you should check the condition of the bodywork carefully. The high-quality fit and finish of an A4 also makes it an ideal candidate for clocking, so ensure the history is absolutely verified. There were three manufacturer recalls on the A4, all for models built before December 2016. One concerns a potential seat backrest fault, one was for seatbelt pre-tensioners and airbags and a third affected TFSI engine coolant pumps.

In a segment dominated by rear-wheel drive rivals, Audi continued to offer this B9-series A4 Avant with a choice of front or four wheel drive layouts. That's a key reason why the brand had to engineer this car very cleverly to get close to the kind of driving satisfaction offered by competitors. In this, the engineers were helped this time round by this MK5 model's adoption of a hi-tech MLB Evo chassis that played a key part in enabling this car to shed up to 120kgs of weight. This platform also gave Audi the opportunity to develop a sophisticated fully-independent five-link front and rear suspension arrangement that delivers superb standards of ride. Ultimately, what all this creates is a more comfort-orientated mid-sized executive contender, but it's still one that can be hurried quite quickly through the bends thanks to very little body roll and superb traction. Most models offer the option of either a six-speed manual gearbox or this car's seven-speed S tronic auto transmission, while under the bonnet, the majority of buyers will choose the 2.0 TDI diesel engine. This is a variant that in 150PS form can return 99g/km of CO2 and nearly 75mpg on the combined cycle. In pokier 190PS 2.0 TDI guise, there's the option of quattro 4WD. Quattro is also on offer to buyers of the six cylinder 3.0 TDI version of this car, who get to choose between 218 and 272PS outputs. Petrol people meanwhile, get a TFSI range offering an entry-level 150PS 1.4-litre unit and a sophisticated super-efficient 2.0-litre powerplant developing either 190 or 252PS. The quicker version comes with quattro, as do high performance S4 and RS4 models that use a potent 3.0 TFSI unit.

Here's a mid-sized executive estate model created by a brand that knows its customers. The magazines might tell Audi to bring us futuristic looks and an uncompromisingly dynamic drive but Ingolstadt knew with this 'B9'-series model that buyers in this segment really value comfort, class and quality. All three attributes were prioritised in this lighter, more agile and more advanced fifth generation A4 Avant. Even more than before, this feels like a car that's been lovingly and very carefully considered. The depth of engineering and the thought that's gone into the tiniest details combine to further enhance the warm fuzzy feeling that's charmed Audi customers for years. If you're one of those people, then you'll like this car very much. And even if you're not, you'll find it hard not to be impressed by way it systematically ticks almost every box on the compact executive market wish list. It's very thorough. Very elegant. And very Audi. 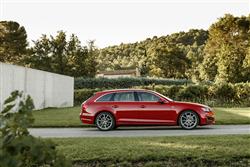 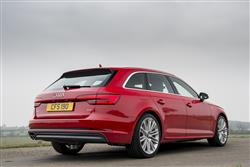 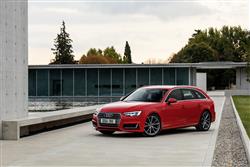 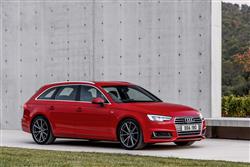 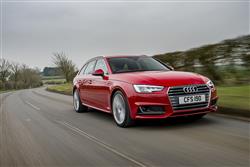 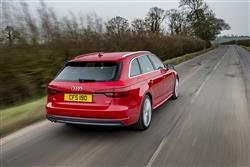