Lighter, leaner and better to drive, Audi's second generation A5 Sportback, launched in 2016, proved to be a classier proposition than its predecessor. As before, there was coupe styling married to a couple of rear passenger doors and hatchback practicality, plus with this MK2 design, there were smarter looks, even more impressive build quality and cutting-edge technology.

Thinking of a used premium-badged compact executive saloon or estate from the 2016-2020 period - say something like a BMW 3 Series or an Audi A4? You might very well be. The problem is that lots of other middle management buyers are too, cars of this sort having become a rather predictable choice. So what if all the same class, practicality and quality could be wrapped up with a slightly different, more individual package? That was the thinking behind this car, Audi's A5 Sportback, in its second generation form. The original MK1 model version of this design was launched back in 2009 at a time when it wasn't 'de rigueur' for a premium-badged car in this class to have a hatchback. Which was why Audi positioned it alongside the stylised two-door Coupe and Cabriolet bodystyles in the A5 line-up and called it a 'five-door coupe'. Buyers liked the idea, familiar already with the idea of up-market coupes with two rear passenger doors thanks to the success of cars like the Mercedes CLS and the Volkswagen Passat CC. As a result, the first generation A5 Sportback sold strongly, shifting 340,000 units in its seven year production run, so many in fact that rivals BMW were forced to launch two very similar products to try and counter its success, the 3 Series Gran Turismo in 2013 and the 4 Series Gran Coupe in 2014. By this time though, Audi was working on something better - and launched it late in 2016, this lighter, longer and leaner MK2 model A5 Sportback. This car might look pretty similar to its predecessor but it was actually completely new from the ground up, with an all-new MLB Evo platform and significant improvements in size, quality, handling, ride and performance. As before, it differed from its rear-driven BMW rivals in its use of a front-driven platform, but Audi put a lot of work in to make that set-up more responsive, reducing weight, increasing power and providing some sophisticated suspension technology. Like BMW, Ingolstadt offered a 4WD option on this car too, a re-developed quattro system that was standard on the potent S5 variant that took an increased proportion of sales in MK2 form. Across the range, buyers also got state-of-the-art cabin quality, class-leading media connectivity and the possibility of using over thirty separate driving assistance systems. The MK2 A5 Sportback sold in this form until the end of 2019, when it was replaced by a facelifted version.

Imagine what an A4 saloon might look like if it had a hatchback, was slightly wider and lower and had an A5 coupe nose and you're pretty much picturing this Sportback model. In this MK2 form, the car got a more sophisticated feel and almost everywhere you look, there's a chamfered surface or an intricately-fashioned part that's clearly been carefully considered - then carefully considered again. Inside up front, you'll find yourself in a cabin that we think will really sell you this car. One of the few things motoring experts agree upon is that Audi sets the standard by which other automotive interiors must be judged and this one is, as usual, very difficult to criticise. We especially like the seats - particularly the 'S line' variant's leather and alcantara-trimmed Sports ones. All A5 seats are anatomically-shaped, with head restraints that can be optionally specified to move not only for height but also for distance from the head. They position you perfectly in front of a magnesium-framed leather-stitched three-spoke multi-function steering wheel which in an 'S line' model, has perforated leather insets and gearshift paddles for the S tronic transmission. In standard variants, you'd view through this wheel two conventional analogue dials separated by the usual information screen. Many original customers though, upgraded to the optional 'Virtual Cockpit' screen, which replaces the entire instrument binnacle with a 12.3-inch LCD colour monitor and has a layout that's fully digital and customisable, with smart 3D graphics and highly detailed effects. Anything this set-up can't tell you will almost certainly be covered by the slimline MMI infotainment display that dominates the top of the dashboard. It's 7-inches in size on standard models - or 8.3-inches if you get a car whose original owner opted for the top 'MMI Navigation Plus with MMI touch' system, with its crisp 3D maps and responsive Nvidia graphics. And in the rear? Well it isn't until you pull open the frameless door, duck slightly to avoid the swept-back coupe roofline and try this part of the car that you begin to appreciate the importance of this MK2 model's small but significant increase in exterior size. The interior gained 17mm of length in MK2 model form and the result of that is that passengers in the back get 24mm more knee room than the previous generation model could offer, plus there's 11mm more shoulder room too. And the boot? Well you access it via a standard powered tailgate which original customers could optionally specify to rise with a swipe of your foot beneath the bumper - useful if you're approaching the car laden down with bags. Once the hatch raises, a 480-litre capacity is revealed.

Most owners in our survey seemed happy. One owner complained about the handbrake not enagaging and had a problem with the engine cutting out at low speeds. The most reported faults related to problems with the alarm system and the central locking. And issues with rattly interior trim and non-engine electricals. Look out for bodywork scrapes and kerb damage to larger-spec alloy wheels. Check that the seats raise and lower as they should. There were a few issues with the car's infotainment system, with phones not connecting properly and flickering screens being the main problem. The DSG automatic gearbox should be checked to make sure it's had a regular oil and filter change, as should the quattro four-wheel-drive system if fitted. Many A5 Sportbacks will have been company or lease cars and, as a result, you should check the condition of the bodywork carefully. The high-quality fit and finish of an A5 also makes it an ideal candidate for clocking, so ensure the history is absolutely verified. There were product recalls for the airbags and seatbelt pre-tensioners (in 2016 and 2017) and for the shock absorber fork (in 2019), so check that any necessary remedial work was carried out.

Can this second generation A5 Sportback really match its rear-driven competitors when volume versions must use the front-driven set-up you'd find in a common family hatch? You might wonder on that score, but on the move, this Audi gets remarkably close to the dynamic standards set by rivals. The reasons why have much to do with the stiff, sophisticated MLB Evo platform and the sophisticated fully-independent five-link front and rear suspension arrangement that from new could be embellished with adaptive damping on request. Also freshly developed for this MK2 model was its 7-speed S tronic auto gearbox which featured efficient dual-clutch technology that couldn't be had on front-driven versions of the previous generation model. Included across the range is the usual 'drive select' vehicle dynamics system that in its standard form, allows you to tweak steering feel, throttle response and gearshift timings to suit the way you want to drive. Under the bonnet, most buyers opt for the 190PS 2.0 TDI diesel. Quattro all-wheel traction and auto transmission were optional from new here, but both features are mandatory if you choose any other engine in the range. There are two 3.0-litre TDI variants developing either 218 or 286PS. Otherwise, the petrol options include a 252PS 2.0 TFSI four cylinder variant or the 354PS 3.0 TFSI V6 that's used in the potent S5 model that storms to 62mph in just 4.7s. If you want to go even faster, you'll need to search out the rare RS 5, which used a 2.9-litre V6 with 450PS. If efficiency is a greater priority for you, this 2.0 TDI S tronic variant is the most frugal model in the line-up, able to manage 68.9mpg on the combined cycle and 108g/km(both NEDC figures).

Audi proved with the original A5 Sportback that there was room in the market for a premium-badged compact executive model with a fifth door and an added dose of charisma. With this second generation version, there's no doubt that Ingolstadt further refined that concept, bringing us a lighter, smarter, more efficient and more up-market product. In summary, this is exactly what the brand promised, an 'intelligent evolution' of a car that stacks up on paper and which in this form at last could more credibly manage to seat up to five people. It's all enough to make this A5 Sportback a hard option to ignore if you fit its target market. For relatively small premium over an A4, it delivers for you a more stylish yet still pretty practical package. One thing's certain: here's another very desirable Audi. 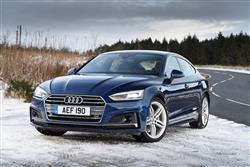 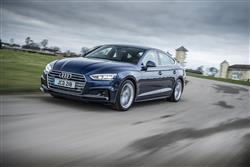 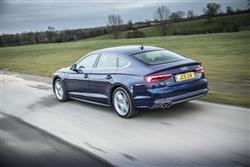 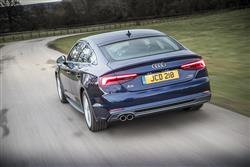 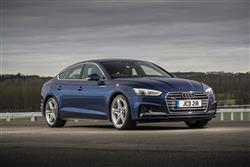 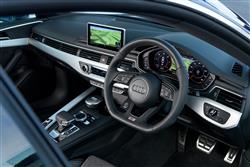