The Audi A6 is one of those rare saloon cars that's probably more famous as an estate. There aren't too many others. The Volvo 850, the Subaru Legacy and, well, after that we're struggling. Perhaps the A6 Avant works so well because we think of its key rivals, the BMW 5 Series and the Mercedes E-Class so dominantly as saloons. The A6 Avant has enjoyed a lot of attention from Audi down the years, being spun off into all-terrain and performance models that were denied the saloon version. In 2011, Audi brought us the C7 generation of the A6 Avant. It retained the Avant's trademark carrying capacity and all-wheel drive options, but this time round it was lighter and a good deal more efficient than its predecessor. Does it make the cut as a used purchase or is demand too strong to generate much in the way of bargains?

The A6 Avant rolled into UK dealers in spring 2011, with four engines being offered. The big seller was the front-wheel drive 177PS 2.0-litre TDI diesel, with the 3.0-litre TDI diesel available in either 204 or 245PS guises. There was also a 300PS 3.0-litre TFSI petrol engine. Quattro all-wheel drive was offered, this version being uprated via the fitment of a crown gear centre differential and a torque-vectoring function. The transmissions hinged around manual gearboxes with Multitronic CVT or manual for front-wheel drive cars, and S tronic twin clutch options for quattro versions. In January 2012, the 313PS BiTDi 3.0-litre diesel engine was launched for the A6, mated to an eight-speed Tiptronic transmission. We also got the 414PS Audi S6 quattro with its downsized 4.0-litre engine actually offering about 20PS less than its predecessor. Brave move. November 2012 saw the launch of the Black Edition trim, with features such as 20-inch alloys, a BOSE sound system, sports seats with black Valcona leather, piano black inlays in the cabin and a black finish for the grille and number plate surround. Spring 2013 ushered in the A6 Hybrid, powered by a 2.0-litre TFSI petrol engine mated to a 53bhp electric motor, which resulted in a combined 242bhp.The ballistic Audi RS 6 Avant appeared in summer 2013, powered by a 4.0-litre V8 TFSI engine good for 560PS. In February 2014 the 177PS 2.0-litre diesel was pensioned off and replaced by a 190PS 2.0-litre diesel in a model badged the A6 ultra, bringing improved efficiency. The A6 Avant was replaced at the start of 2015 with a facelifted version first unveiled at the 2014 Paris Motor Show.

If anything, the Avant's styling is rather better resolved than that of the A6 saloon's. Where the four door car has an aggressive front and somewhat apologetic rear end lines, the Avant looks better balanced, to this eye at least. The steeply-raked rear window hints that this Audi is more concerned with style than ultimate carrying capacity but most buyers in this class will forgo a few litres of space for a slinkier shape. There's plenty of space to play with inside the A6 Avant though. The wheelbase has been massively extended over its predecessor with resultant benefits when it comes to interior room. The A6 Avant has a capacity of 565-litres, which can be increased to 1,680-litres by folding down the rear seat backs. The load bay has luggage lashing eyes, side restraining straps, bag hooks, a double cargo floor, a rail luggage fixing system, a dirt-resistant tray and roof rails as standard. A through-load facility and a fixing set that uses the two standard rails in the cargo floor are optional. The luggage compartment in this Avant can even be opened automatically simply by waving your foot to a pair of sensors beneath the rear bumper if the optional advanced key feature is added. Even the entry-level Avant SE includes alloy wheels, leather upholstery, cruise and front and rear parking controls, SD-based satellite navigation, Bluetooth phone preparation, split/folding rear seats and light and rain sensors. S line models add larger 18-inch alloy wheels, xenon headlamps with LED daytime running lamps, sports suspension, upgraded Valcona leather upholstery and an exclusive S line exterior and interior styling treatment.

The prior generation A6 had started to shake off the car's surprisingly shaky reliability record. Corrosion is simply not an issue with Audis and another reason why resale values are high. Look for a fully stamped up service history and look for uneven tyre wear on the S line models. Also make sure there aren't any parking scrapes or kerbed alloys. You'll probably find the best bargains with the most scope for negotiation on the 177bhp diesel variants as they're the most common.

It was Colin Chapman who said that the best way to improve a vehicle was to simplify then add lightness. If that is indeed the case, then Audi's A6 Avant was halfway to becoming a decent drive in its post-2011 guise. This design was certainly lighter than its predecessor, with the entry-level 2.0-litre TDI diesel version that most customers will chose slicing 70kg from the previous model's kerb weight. The A6 has never had the best reputation for ride, largely because it took Audi quite some time to figure out how to tune their suspensions systems in harmony with the stiffer sidewalls of run-flat tyres. This A6 improved that situation by taking crucial unsprung weight out of the suspension system by using aluminium components and also offering the option of adaptive air suspension with controlled damping. Engines? This Avant got four from the outset. To begin with, Audi concentrated on efficiency with a 175bhp 2.0-litre TDI diesel that was be the big seller. Two more diesels were also available, both based on a 3.0-litre common-rail V6. The 202bhp version was offered with Audi's optional Multitronic continuously variable transmission and front-wheel drive, while the brawnier 243bhp V6 diesel got quattro four-wheel drive and Audi's seven-speed S-Tronic twin-clutch gearbox. It's good for 62mph in 6.1 seconds. If that's not quick enough, you'll need a petrol engine and it'll be the 298bhp 3.0 TFSI with 298bhp, quattro four-wheel drive and a seven-speed twin-clutch gearbox which rockets through 62mph in 5.5 seconds. There's also the 310bhp twin-turbo V6 TDI that is a whole lot of engine.

These cars are expensive for a reason. They're extremely good. We've scoured around for underpriced examples but the market is strong for A6 Avants and although there's been a slight softening in prices of cars just coming out of warranty, there just aren't any weak links in the range. Just about the only thing you can take advantage of as a buyer is tracking down a car with an extended warranty that's been priced the same as the three year old models. Sounds unlikely but it does happen. The S6 and RS6 Avant models are specialist vehicles that draw their own cult following, but the most impressive car in the mainstream range might be the niche BiTDi diesel. Even the base front-wheel drive 2.0-litre diesel is a class act though and wears its age well, at least to 150,000 miles. There's really not too much to grouse about. 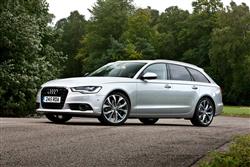