Audi might have developed niche models for almost every market, but the A6, along with the A3 and A4, represents the spine of its range. In the UK at least, the A6 has long played supporting act to the likes of the BMW 5 Series and Mercedes E-Class but when it came to the launch of the fourth generation model in 2011, Audi decided that it was time to propel the A6 firmly into the limelight. Whereas every previous A6 redesign had seen the car get bigger and heavier, the C7 generation of the A6 went the other way. It was slightly smaller, a lot lighter and far more efficienct than before. The electronic systems built in were hugely impressive and the car was better to drive and easier to live with. Does it stack up just as well as a used proposition? Read on to find out.

Perhaps we can sometimes stand accused of a little parochialism in the way we perceive the A6. To British customers, it's the car that chases BMW and Mercedes. Beyond our shores though, it's much more than that. In fact, the MK3 model A6 was the best selling executive saloon in the world. Admittedly a good slug of these sales came from China, where a locally produced long-wheelbase A6 was a monster hit, but even without this skew on the figures, the A6 has done extremely well in taking on the likes of the Mercedes E Class and the BMW 5 Series. Here in Western Europe however, the A6 could often be found lagging behind these nemeses in the sales charts. The reasons are hard to establish, but probably hinge upon the more dynamic driving appeal and image of the BMW and Mercedes models. If that is the case, then Audi's decision here to counter with a revised A6 focusing on efficiency brought about via lightweight construction didn't seem to be the way to put European bums on seats. The cars started arriving in UK dealers in spring 2011, with four engines being offered. The big seller was the front-wheel drive 177PS 2.0-litre TDI diesel, with the 3.0-litre TDI diesel available in either 204 or 245PS guises. There was also a 300PS 3.0-litre TFSI petrol engine. Quattro all-wheel drive was offered, this version being uprated via the fitment of a crown gear centre differential and a torque-vectoring function. The transmissions hinged around either a conventional manual or a Multitronic CVT auto 'box for front-wheel drive cars - or an S tronic twin clutch auto option for quattro versions. In January 2012, the 313PS BiTDi 3.0-litre diesel engine was launched for the A6, mated to an eight-speed Tiptronic transmission. We also got the 414PS Audi S6 quattro with its downsized 4.0-litre engine actually offering about 20PS less than its predecessor. Brave move. November 2012 saw the launch of the Black Edition trim, with features such as 20-inch alloys, a BOSE sound system, sports seats with black Valcona leather, piano black inlays in the cabin and a black finish for the grille and number plate surround. Spring 2013 ushered in the A6 Hybrid, powered by a 2.0-litre TFSI petrol engine mated to a 53bhp electric motor, which resulted in a combined 242bhp.The ballistic Audi RS 6 Avant appeared in summer 2013, powered by a 4.0-litre V8 TFSI engine good for 560PS. In February 2014 the 177PS 2.0-litre diesel was pensioned off and replaced by a 190PS 2.0-litre diesel in a model badged the 'A6 ultra', bringing 64.2mpg economy and 114g/km emissions when paired with the seven-speed S tronic transmission. The A6 was replaced at the start of 2015 with a facelifted version first unveiled at the 2014 Paris Motor Show.

If there was one defining characteristic of the old MK3 model A6, it was its size. The thing was huge. While that was great for rear seat passengers and people smugglers, it never did much for the car as a dynamic entity and with this fourth generation model, it was refreshing to see that Audi managed to resist the temptation to go large again. The MK4 A6 turned out to be both shorter and lower than its predecessor but a few millimetres wider. Despite that, rear legroom was up, due in no small part to the car's wheelbase being longer than before. Use of aluminium cut the car's body and chassis weight by 15 per cent with 80kg being shaved off the final product. A kerb weight of 1575kg while toting a diesel engine certainly seemed laudable for a car this large. To put that figure into perspective, it's not much more than a Nissan 370Z coupe. The styling was rather predictable, Audi deciding not to risk edgy styling on one of its mainstream cash cows, but the overall effect was cleaner and sleeker than before. The shorter front overhangs gave the MK4 A6 a more dynamic stance, helped by the lower roof line and more aggressively tapered rear. Ultimately, it was a very assured piece of styling, although not one that provoked too much reaction. The interior followed a similar theme and was familiar to buyers who'd given the pricier A7 Sportback the once over. A wraparound dash with low key but high quality detailing followed Audi's A8 design theme.

The prior MK3 generation A6 had started to shake off the car's surprisingly shaky reliability record before the launch of this fourth generation car. Corrosion is simply not an issue with Audis and another reason why resale values are high. Look for a fully stamped up service history and look for uneven tyre wear on the S line models. Also make sure there aren't any parking scrapes or kerbed alloys. You'll probably find the best bargains with the most scope for negotiation on the 177bhp diesel models as they're the most common.

Weight reduction as a method of improving the driving experience applies just as much to executive models as it does to sports cars. The benefits in terms of handling, braking and acceleration are easy to imagine but there are also key benefits in terms of ride quality, especially if the weight reductions come, as they do in the A6, hand in hand with an increase in chassis stiffness. This Audi has never had the best reputation for ride, largely because it took the brand quite some time to figure out how to tune their suspensions systems in harmony with the stiffer sidewalls of run-flat tyres. The Mk4 A6 improves that situation by taking crucial unsprung weight out of the suspension system by using aluminium components and also offers the option of adaptive air suspension with controlled damping. Engines? Well from launch with this car, Audi concentrated on efficiency with a 175bhp 2.0-litre TDI diesel that was the big seller. Two more diesels were also available, both based on a 3.0-litre common-rail V6. The 202bhp version was offered with Audi's optional Multitronic continuously variable transmission and front-wheel drive while the brawnier 243bhp V6 diesel got quattro four-wheel drive and Audi's seven-speed S-Tronic twin-clutch gearbox. It was good for 62mph in 6.1 seconds. Those wanted more initially needed a petrol engine - the 298bhp 3.0 TFSI with 298bhp, quattro four-wheel drive and a seven-speed twin-clutch gearbox. It was a car that rocketed through 62mph in 5.5 seconds. Folk needing to go quicker still were soon offered the S6. Its twin-turbocharged, direct-injected 4.0-litre V8 generated 414bhp and cranked out 550Nm of torque at just 1,400 rpm - which was a little more torque than the previous generation model's V10 mill. The S6 got a twin-clutch transmission with seven speeds, which could be marshalled by some cool aluminium paddle shifters. Quattro all-wheel drive transmission was naturally standard, this time combined with an optional torque vectoring differential between the rear wheels. Tipping the scales at 136 kilos less than its predecessor, you'll find that the S6 is no slouch, bludgeoning its way to 60mph in just 4.6 seconds. With better weight distribution than before, it also features "cylinder on demand" technology that allows the V8 FSI engine to cut four of the cylinders when cruising to aid efficiency. At low speeds or when throttle demand is higher, the erstwhile dormant four cylinders thrum seamlessly back into life. The S6 rides on standard air suspension and Audi drive select driving dynamics system is also standard. Beyond that, there's the top RS6 flagship variant if that seems slow.

This fourth generation A6 did all the right things. It was smaller and lighter than before and featured more efficient engines. Audi even stepped back from the brink by launching an S6 model with less power than its predecessor. Better built, with refined diesels and a slick hybrid, rapid sports models and the usual mix of saloon and estate variants, the A6 helped build the Audi's market penetration in this segment, but by the end of 2013, it still only had half the UK market share of a Mercedes E Class and was languishing some way behind the BMW 5 Series. So was it an underperformer? Not really. Audi plays a very long game and progress in the right direction works for them. As a used buy, it's a decent bet, despite strong residuals that'll keep prices strong. Even S6s are retaining their value better than before thanks to today's slightly more amenable fuel prices. Look for cars just coming out of warranty for the best bargains. 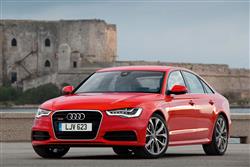