The Q2 shows Audi at its most playful. Alisdair Suttie tries the 1.5-litre petrol 35 TFSI version.

Nobody loves a niche more than Audi, so it's hardly a surprise to find it campaigning strongly in the small crossover market with the Q2. This was the first compact SUV from the marque to come with an even number, which heralded a more youthful, funky style. The German firm reckons the Q2 is small but perfectly formed, especially in this lightly revised form. Is it? Let's find out at the wheel of the 1.5-litre 35 TFSI variant.

SUVs have become a core part of Audi's line-up, with the Q3, 5 and 7 models offering a Russian doll range to customers depending on the size of car they need. With the Q2, Audi has taken a different approach and it's much more about fun and style instead of being too concerned with practicality. This puts Audi into unchartered territory when it comes to rivals, but it hopes the classy appeal of those four rings on the bonnet will convince buyers to choose it over more mainstream brands. The compact Q2 makes no bones about the fact it's not going to carry you over mountains and through forests. It's very much a crossover that's looking to snipe sales from many of its mainstream rivals with the attraction of its quality. Audi thinks that many of those people will want this efficient 1.5-litre 35 TFSI petrol variant. Especially in this revised form.

Sitting a little shorter, narrower and taller than the A3 hatch it's based on, the Q2 delivers a similar driving experience coupled to the raised driving position that's so much a part of the appeal of crossovers. Despite that higher seating, the Q2 resists lean in corners very well on the standard 'Dynamic suspension'. With the 'S line' models, you have the no-cost option to upgrade to 'Sports suspension', which firms things up for greater cornering grip, but it does make the ride a little too stiff for our taste. All versions have electric power steering with variable assistance, so turning the wheel at lower speeds is easy when parking but more heft is added as the car gains pace. Further refinement to the driving experience is provided by Audi's 'Drive Select' system that lets you choose from 'Comfort', 'Auto', 'Dynamic' and 'Efficiency' settings. Each of these choices tailors the way the helm, gearbox and accelerator pedal react to the driver's inputs. All mainstream engines except the entry-point petrol unit can be specified with either a six-speed manual or seven-speed dual-clutch 'S tronic' auto we tried. Audi says the 1.5-litre TFSI petrol variant will continue to be the best seller and it's easy to see why, with its blend of pace and refinement. From rest to 62mph takes 8.6 seconds on the way to 132mph. The 2.0-litre turbo petrol variant is of course swifter, but its extra power adds little to the overall driving experience, though some will be attracted by its near-hot hatch performance.

Audi has subtly altered the look of this Q2, slightly lowering the octagonal Singleframe front grille to make the front of the car appear wider. Plus full-LED headlamps are now standard and the air intakes now look more 'expressive' and, as with other recent Audis, narrow slits have been added between the radiator grille and the bonnet in the style of the iconic Audi Sport quattro. At the rear, there's a fresh bumper design with an integrated diffuser insert featuring large five-sided polygons. As before, the Q2 certainly looks distinctive with its 'floating blade' C-pillar and colourful trimming. It's slightly shorter and narrower than an A3 hatch and boasts a complex shape that shows a lot of vertices and edges. In profile, the high shoulder line is especially eye-catching, as are the concave flanks in the door area. Inside, most variants now get the 12.3-inch Virtual Cockpit instrument binnacle display as standard, paired with an 8.3-inch 'MMI navigation plus' centre-dash screen. Otherwise, you'd have to be an Audi sales person to really notice the changes made - things like smarter fabrics, a revised gearshifter knob and re-styled air vents. As before, the MMI infotainment system can be controlled by natural language operation and the integrated MMI search set-up. The driver's seat position is low in relation to the steering wheel as in an Audi saloon. There's reasonably comfortable seating in the rear for two, but if you'll be using the back seat for adults regularly, you'd be better off trying an Audi Q3. Practically, the Q2 fulfils the fundamental expectations of an SUV with a high entry, good visibility and a large luggage compartment (405 to 1,050-litres of capacity). A power tailgate is standard, as is a three-way split rear bench backrest with cargo through-loading.

Audi has to tread very carefully with the Q2 as its pricing pitches it somewhere between the firm's A1 supermini and the A3 small hatch. Of course, both of those are premium offerings within their segments and the same is true of this small SUV model. The price structure reflects this and the Q2 is a little dearer than some rivals but avoids stomping on the toes of its Q3 big brother. So, the price range for this 35 TFSI petrol variant sits in the £27,000-£39,000 bracket, spread across 'Sport', 'S line', 'Black Edition' and 'Vorsprung' trim levels. Adding the seven-speed 'S tronic' dual-clutch auto 'box will add a further £1,600 to the final bill. As for equipment, well all models get alloy wheels of at least 16-inches in size, electrically adjusted door mirrors and chrome-plated exhaust tips. Inside, you can expect to find a three-spoke steering wheel that has remote controls for the stereo and hands-free phone connection. Air conditioning keeps the cabin at your desired temperature, while the 'MMI Radio Plus' with seven inch colour screen takes care of the infotainment. It's operated by a rotary controller just behind the gear lever and lets you hook up your smartphone to access calls, music and selected apps. There's also voice control, Bluetooth and DAB digital radio, as well as the 'Audi Music Interface' to connect to an Apple iPod or iPhone.

There's no doubt a lot of people will be drawn to the Q2 for its looks and the way it drives, but the numbers still have to stack up if this Audi is going to appeal to as many buyers as possible. So, fuel consumption is a key consideration. Let's look at the engine we tried, the 1.5 35 TFSI turbo petrol unit that's also the best seller in the range. This 150hp powerplant delivers a best of 47.9mpg combined (WLTP) and up to 133g/km of CO2. Choose the 7-speed S tronic auto gearbox instead of the 6-speed manual and you'll pretty much replicate those figures. Depreciation figures should be as strong as they usually are on Audi models. It's a little disappointing though, that the brand sticks to its usual 60,000 mile limit on the three year warranty. Optional extra-cost packages can extend the cover to either four or five years. Pre-paid servicing packages are also available.

It may have taken Audi a while to expand its SUV line-up as far as the small crossover sector, but the Q2 has proved to be a useful addition to the company's range and the segment overall. We reckon there will be plenty of people willing to pay the higher price for this model over most of its rivals to park that badge on their driveways. It's not perfect, of course, and the larger wheel options can crash over bumps when driving around town. Also, you might want to steer clear of the smallest petrol engine if you need a car that can deal with motorway driving on any sort of regular trip. We'd recommend this 1.5-litre 35 TFSI variant as a good all-round choice. It shows a more playful side to Audi, underlining the fact that the gamble on an even-numbered SUV has paid off. 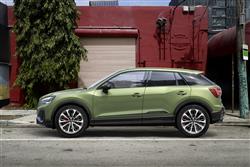 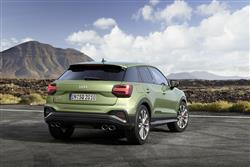 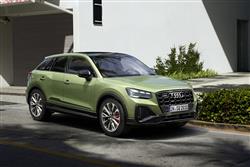 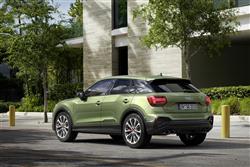 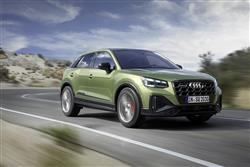 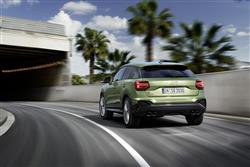