Back in 2015, Audi more specifically targeted the growing market for compact five-seat Crossovers with a much-improved version of its first generation stylish little Q3. In this form, the car became cleverer, smarter and more efficient, all of these being attributes that translate well into the used segment. When it comes to this kind of car, there are certainly cheaper options. The question though, is whether there are really any more desirable ones.

Sales of five-seat Qashqai-class Crossovers have certainly taken off in recent years. Nor is it only the mainstream brands that are offering us cars of this kind - family hatches with raised ride heights and a dose of SUV-style attitude. The premium makers are at it too and Audi's done well with its compact Q3, first launched in 2011 but usefully updated in early 2015 to create the car we're going to look at here as a used buy. The 2015 update was timely because by then, this model was facing much tougher competition. Its closest rival, BMW's X1, had upped its game and Mercedes had also entered this profitable market niche with its GLA model. On top of that, mainstream-brand Crossovers like Nissan's Qashqai were offering higher quality than they'd ever previously managed to provide. Nor was it escaping the attention of potential Q3 buyers that for the same kind of money being asked by Ingolstadt, they could have a slightly larger RAV4 or Honda CR-V-style compact SUV. For all these reasons, this Audi needed to evolve - and it did. It continued to be based on a Volkswagen Golf platform, with a simple 'on demand' quattro 4WD system and production farmed out to SEAT in Spain. As for what was different with this facelifted model, well the looks were slightly smarter and there was a bit more equipment, but the main changes lay beneath the bonnet. There, buyers were treated to a completely revised and fully Euro6-compatible turbocharged engine range that offered more power, yet considerably greater levels of efficiency. There was also improved safety, slightly sharper handling and as much on-the-move connectivity as you could ask for back in 2015, courtesy of the brand's clever optional 'Audi connect' multimedia system. This MK1 model sold until mid 2018, when it was replaced by an all-new second generation design.

Those who, perhaps understandably, think that Audi did little more than shrink a Q5 in a hot wash to create this model might be interested to find that it's actually based on a concept car (the 'Cross Coupe Quattro') announced in 2007, well before that larger SUV saw the light of day. That prototype seemed pretty avant garde back then on the motor show circuit, but in finished production form, this Q3 has always seemed a conservative-looking thing, though the coupe-like roofline and sharply sloped D-pillars do give its silhouette an expressive and sporting demeanour. With this revised facelifted MK1 model, Audi's design team tried to further build on this, primarily at the front where the brand's familiar Singleframe front grille is more distinctive, with a 3D-effect emphasised by chromed vertical bars on the S line variants and enlarged top corners that extend to revised headlights that use either 'xenon plus', 'all-weather' or full-LED technology, depending on the trim level you choose. Up-front, there's the slightly raised driving position this class of car usually delivers and it's easy to get comfortable thanks to plenty of flexibility, both from the supportive height-adjustable sports seats and the reach and rake-adjustable three-spoke steering wheel. Is it all classy enough? It's a fair question to ask, given fears that Spanish construction of this car alongside humbler SEATs would lead to a cheap-feeling interior. Such worries continue to be groundless with this revised model which, like its predecessor, manages to offer exactly the same high quality finish you'd get in an Audi Q7 costing three times as much. Out back, plusher variants get a power-operated tailgate that rises to reveal a 420-litre cargo area. The capacity's very usable too, with four lashing points and a reversible boot floor made from velour on one side and plastic on the other so that you can flip it over for the carriage of things like muddy boots and muddy dogs.

Most Q3 owners we came across in our survey seemed very satisfied, but inevitably there were a few issues with some cars. We found a couple of owners, for example, you complained about occasional various unwanted braking actions of speeds at around 50mph. On diesel models, check that the previous owner has taken the car on frequent motorway journeys to ensure that the diesel particulate filter (DPF) can regenerate, as this process is only triggered at high speed. A clogged-up DPF will be costly to replace. Other potential problems with the DPF-equipped cars occur if they have been shut off part way through a regeneration. The result is contamination of the oil system with fuel, which leads to the oil level rising gradually over time. This can cause damage to the engine. As usual with a premium model, check the alloy wheels for scratches and scuffs. 'S line' variants have larger alloys and are particularly prone to this. If you're looking at a quattro four-wheel-drive model, look at the tyres. Audi advises that they should all be the same make and model of tyre all the way around to maintain the car's handling performance. A recall was issued in July 2017 due to possible brake light failure when the parking brake is operated. This affects Q3s built between 02/10/2014 and 01/10/2016.

If ever there were any doubts that this car is more of a 'Crossover' - a family hatchback with SUV styling cues - than any kind of proper compact SUV, then the Q3's roadging experience should set them firmly to rest. Yes, you have this class of car's more commanding driving position at the helm, but otherwise, the at-the-wheel experience is exactly like the ordinary Focus-sized five-door model you might be driving right now. Unlike a truly capable 4x4, it doesn't roll through the bends or crash through the potholes that infest our country's terrible tarmac. Which means that virtually no acclimatisation is required if you come to Q3 ownership fresh from something more conventional. But then much the same is true of any Crossover model. In essence, that's partly the point of this kind of car: lifestyle attitude without any of the adventure-orientated mechanicals you probably don't really need. Things like the kind of weighty permanent 4WD system you get on all versions of this car's larger Q5 showroom stablemate. This Q3 may look similar to that car but under the skin, it's a very different thing, with engineering that for all the 'vorsprung durch technic' marketing is really more Volkswagen-based than borrowed from anything you'd recognise in an Audi. That means underpinnings shared with an old MK6 Golf and the kind of simpler multi-plate clutch 'on-demand' 4WD set-up you'd get in the Wolfsburg brand's compact Tiguan SUV. But you won't be buying this car with thoughts of striking out across the Serengeti. Many Q3 owners indeed, will take the opportunity to save both money and weight and choose a powerplant that will allow them to choose a Q3 without any quattro technology at all. Two engines allow this option, with the least expensive of the pair, the 1.4-litre TFSI petrol unit, actually only available in two-wheel drive form. Most buyers though, will probably want a diesel. It's the lower-powered 2.0 TDI derivative (with power output that was enhanced in this revised model from 140 to 150PS) that can come front-driven, a variant capable of 62mph in 9.6s en route to 126mph. Most owners though, tend to upgrade this variant with the extra-cost option of quattro traction, if only because this is necessary to give themselves the chance of getting a car equipped with the brand's slick 7-speed S tronic dual-clutch auto transmission that comes as an alternative to the standard 6-speed manual gearbox. There's also a pokier 2.0-litre TDI unit with 184PS that's only available with quattro 4WD. It's the same engine you'd find in a Golf GTD hot hatch, hence rapid performance that'll see you make 62mph from rest in just 7.9s on the way to 136mph. On the subject of rapid performance, if that's your over-riding priority, then as a Q3 buyer, you'll be turning your attention to the pair of high speed petrol variants, both of which come only with quattro traction and the S tronic gearbox. First up is the 2.0 TFSI model, offering 180PS. In an altogether different league though, is the flagship version of this car, the RS Q3, one of the very fastest Crossovers it's possible to buy.

Audi knows better than most manufacturers that there's never a one-size-fits-all solution to modern motoring, hence the range of options offered by its various Q-series models. This one could well be all the car you actually need if you're searching for a compact premium used crossover. Don't think of it as a shrunken version of its Q5 compact SUV stablemate. It isn't really any kind of SUV, instead offering a smarter, more up-market take on the current trend towards lifestyle-orientated Qashqai-class five-seat Crossovers. Sensible, stylish, fashionable cars that are striking such a sweet spot in the current market. As with almost any model of this kind, this one can easily manage the school run, an extended shopping trip, a weekend away or the annual family ski trip to Chamonix. The difference here though, lies in the quality, the depth of engineering and the sheer feel-good factor that you'll get by having this car on your driveway. Compromises necessary to create its relatively affordable price tag have been cleverly chosen and detract little from the extremely polished end result. One that in this improved first generation guise delivers on its promises of greater efficiency and extra technology. It's a little sharper to drive too, though could still be more responsive in that respect. Ultimately though, this Audi's priorities lie in other areas. Yes, you can certainly buy something slightly bigger and SUV-ish for this kind of money. But after trying a Q3, you probably won't want to. 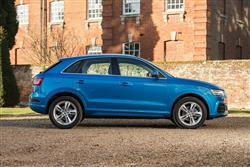 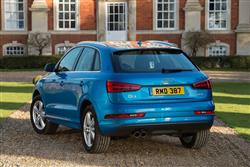 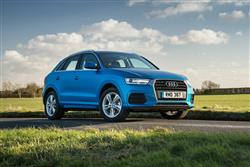 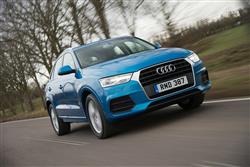 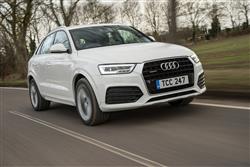 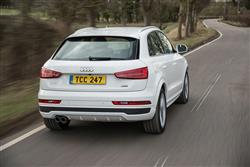