The Audi Q3 at first looked to be a case of stretching a theme too far. The monster Q7 SUV has spawned the mid-sized Q5, but many thought that this was as small as Audi sports-utes would get. Wrong. The Q3 is a dinky little compact Crossover that offers the perceived advantages of a slightly higher-riding vehicle at a more modest price point (for an Audi). Although some may question the advantages of this car over the A3 premium family hatch on which it's based, the market took to the Q3 fairly readily and Audi fleshed the range out with further models. Here's what to look for when shopping for a used version.

Audi is a company with a talent for making motoring journalists feel a little silly. Few gave the behemoth Q7 much of a chance when it was launched and many wrote the Q5 off as too expensive and not spacious enough. In the event, both models outstripped even Audi's most optimistic sales projections. Cue the Q3. It launched into the UK market in mid-2011, a time when Land Rover pulled a real flanker with its astonishingly successful Range Rover Evoque. Compared to the British car, the Q3 appeared deeply conservative. Sales subsequently showed that the taste was for bold designs and the Evoque wiped the floor with any rival you could care to mention. If though, you view the sales statistics that lie beyond those of the junior Range Rover in the premium-badged compact Crossover segment, you'll find that early versions of this Q3 actually acquitted themselves pretty well. The Q3 was launched with a choice of three turbocharged engines. The petrol units comprised a 168bhp 2.0-litre petrol, available in front or four-wheel drive guises, and a 208bhp 2.0-litre that was only offered in quattro all-wheel drive form. Choose diesel and you got a 175bhp version of Audi's 2.0-litre common-rail engine, with four-wheel drive only. At the start of February 2012, the Q3 achieved a Euro NCAP five star safety award.A 138bhp version of the 2.0-litre TDI diesel engine mated to a quattro all-wheel drive chassis appeared in July 2012. The Geneva Show of spring 2012 saw the debut of a punchier Q3, the 306bhp RS model. At the start of 2014, Audi introduced a budget 148PS 1.4-litre TFSI petrol engine to the Q3 range, with front-wheel drive and either manual or S tronic transmissions. At the other end of the line-up, it introduced the ritzy S line Plus trim level. These were the final set of changes before Audi announced a facelifted car for the 2015 model year. The 1.4-litre petrol engine got Cylinder On Demand technology to make it even more efficient and the RS Q3's peak power was lifted from 306 to 335bhp in order to combat the rival Mercedes GLA 45 AMG.

While Audi could be accused of a certain lack of imagination when it comes to the Q3's styling, it's a look and feel that customers are accustomed to, which they clearly like and which may well date better than more extrovert rivals. In size, the 439cm long Q3 is 24cm shorter than the next SUV up in Audi's product range, the Q5, although the Russian doll styling may confuse some as to which model it is. Many customers still have difficulty differentiating an Audi A5 Sportback and an A7 unless they're parked next to each other and it's the same story with the Q3. Based on the same running gear as it's VW Group cousin the Volkswagen Tiguan, the Q3 isn't too much different in terms of interior space. The boldly swooping roofline of the Cross Coupe concept that first inspired the Q3 was ditched for inal production models in favour of a more conventional silhouette. The result is seating for three adults (just) in the back, with a 460-litre luggage capacity. Like the Q5, the rear seats don't tumble flat to the floor when folded, but you'll still get up to 1365-litres should you fold them forwards.

Q3s tend to be pretty reliable things, but do check for accident damage and make sure that all servicing has been done on schedule. The S tronic auto gearbox can occasionally throw a fault code which will need to be reset at a main dealer. Do inspect the vehicle carefully for signs of overenthusiastic off-road excursions, especially on quattro models. These cars were never designed for anything much more arduous than a gravel path, so bouncing them around in the dirt will rack up hundreds of pounds worth of damage in pretty short order. Alloys get scored very quickly and the exhaust system is not shielded in the way more serious 4x4s are. The interiors are tough and well screwed together and there is very little cause for complaint with the engines. You'll probably find the best bargains with the most scope for negotiation on the 2.0-litre diesel models as they're the most common.

The Q3 features a number of interesting technical highlights. The seven-speed paddle-shift S-tronic dual clutch auto gearbox uses a lightweight clutch to disengage the engine and allow the Q3 to freewheel without the drag of turning the engine over when the driver selects 'efficiency' mode from the 'drive select' system on the motorway. This comes as a welcome relief after the gloopy trailing throttle feel of many vehicles fitted with regenerative charging systems. While the bigger Q5 and Q7 models get a heavy duty Torsen-based full-time four-wheel drive system, the Q3 opts instead for the simpler and lighter Haldex multi-plate clutch set-up. You shouldn't want for grip however, as this fast-acting system is augmented by an electronic differential lock that works in parallel with the ESP stability control. The 1.4-litre petrol models will see a sprint to 62mph come and go in a crisp 9.2 seconds if you change gear yourself, while a reminder that the software is better than you comes with an 8.9 second time for the S-tronic auto transmission. Top speeds are 124 and 126mph respectively, thanks to a marginally taller top gear on the S-tronic box. Extensive use of aluminium keeps weight down, with the manual model tipping the scales at just 1,385kg. Want faster? The early RS Q3s will be rapid enough for most. It demolishes the 62mph benchmark in just 5.5 seconds and is only reined in by Audi's electronics at 155mph. This top variant's 2.5-litre five-cylinder engine you may know about, familiar from the TT RS and RS 3 Sportback. Peak power is made between 5,200 and 6,700 rpm, so it likes a few revs on the board.

The Audi Q3 is no sports utility vehicle. It doesn't go off road and isn't big enough for much in the way of utility. Think of it instead as an Audi A3 on stilts and then it begins to make a bit more sense. Or less, depending on your viewpoint. The punchier petrol-engined cars actually handle very well in spite of their elevated centre of gravity, but the 2.0-litre TDI diesels remain the go-to pick from a used perspective. They're tough and reliable and good to drive. Residual values are firm for these cars, so you won't find too much in the way of bargains. 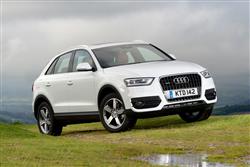