Audi's understated Q5 continued in its subtle conquest of the premium compact SUV sector in the facelifted post-2012 guise we look at here. This improved first generation model got a range of more efficient engines and even more car-like driving dynamics that made this model great on tarmac and even pretty effective for light off road use. There's loads of advanced technology and a beautifully practical interior crafted in Audi's own inimitable style. In short, if you can afford it, you'd like one.

In many ways, Audi owns the premium part of the compact SUV segment. Has done ever since this car, the Q5, was introduced in 2008. Back then, it didn't have much to beat, with only BMW's aging first generation X3, Volvo's quirky XC60 and Land Rover's more utilitarian Freelander offering alternatives to buyers wanting the class and road manners of a compact executive estate but the high-set driving position of a proper SUV. In the years following the Q5's original launch though, the opposition caught up, BMW announcing a second generation X3 and Land Rover introducing its avant garde Range Rover Evoque. Hence the need for the Q5 to up its game in 2012 with a far-reaching package of enhancements. These included tweaked styling but the really important change came with a redesigned engine range offering extra power and lower running costs. There was also extra high-tech equipment and, for those who could afford it, a frantically fast SQ5 flagship model. Audi, you see, doesn't do things by halves. As a result, the Q5 was refettled sufficiently to last all the way to late 2016, when an all-new second generation model was launched. Let's checked the facelifted MK1 version out as a used car buy.

Audi doesn't like to radically alter the appearance of its cars when it chooses to update them - and it didn't here. As a result, with this facelifted first generation Q5, the coupe-like roofline and the wrap-around tailgate remained as before as part of a shape that, as previously, remained 210mm taller than the kind of Audi A4 that buyers could also have considered in this era. However, the post-2012 Q5 package was considerably enhanced by a subtle series of updates. These included revised headlamps featuring xenon lighting. Most models got these headlights framed by LED daytime running lights, the lamps flanking a smarter high-gloss black single-frame front grille with bevelled upper edges. Further detail changes included modified bumpers with high gloss black inserts and foglights with chrome rings. For many buyers though, it was more important to note that the facelift changes included the addition of roof rails and cross bars as standard equipment. Inside, the mid-term update tweaks were equally low key, though owners of the original version of this model will notice the extra splashes of chrome and high gloss black trim, the clearer instruments, the neater control stalks and the simpler-to-use MMI infotainment system. Otherwise, not much changed - which meant that potential buyers could continue to expect a very classy cabin indeed, though one that some may feel could have been a bit further distanced from that of an ordinary Audi A4. Even the driving position doesn't feel that different, your perch not quite as high-set as you'll find in less dynamically-oriented cars of this kind. In the back, thanks to the long 2.81-metre wheelbase, the reclinable rear seat offers comfortable space for two adults - or three at a push, people who'll thank you for finding a Q5 whose original owner specified the extra cost 'Rear Bench Seat Plus' option which enables the rear bench to slide back and forth to prioritise either passenger legroom of luggage space. And talking of luggage space, well though the 540-litre cargo bay isn't the largest in the class, it's not far off it and has a useful selection of hooks, power sockets and fastenings, flexibility that some original buyers added to by specifying Audi's neat rail-mounted load security system. Go for a variant that was originally fitted with the sliding rear seat and you also get a useful through-load system for longer items, but if you need more room than that, pushing forward the 60/40 split-folding rear seat increases the capacity to 1,560-litres - or more if you find a car specified with the fold-flat front passenger seat. In that case, there's enough load length to carry a surfboard should you so wish.

Most Q5 owners we surveyed were very happy with their cars but inevitably, there were a few issues reported. One owner reported premature brake wear, another talked of excessive oil consumption and another had had a complete transmission failure. One owner had a problem with shuddering and bucking on inclines, something which was eventually traced to the need for a new fuel injector. As for minor issues reported that you might want to look out, well one owner had a problem with rattles in three areas of the car - in the driver's side door, in the driver's seatbelt mount and around the area of the cargo cover. It's unlikely that too many Q5s will have been used off-road in anger but just in case, give a thorough check to the under body of the car and make sure those wheels are in decent shape. Wheel damage is more likely to have come from urban kerb stones than Rubicon trail boulders and so are the parking knocks that the Q5 may have collected. Audi's quattro 4x4 system should prove reliable and the engines have all been used extensively in other Audi models so there should be little cause for concern there.

Whether your destination is Sainsburys or the annual family skiing trip to Crans Montana, you'll feel better about doing it in an Audi Q5. In between, in contrast to larger, plusher and thirstier 4x4s, you won't get that nagging feeling of using a sledgehammer to crash a nut when it comes to meeting your real motoring needs. Nor, when you're alone on a twisty B road, should you need to wish you'd bought something sportier. Of course, this car faces tough competition, but the well considered package of changes made to this smarter, better equipped and higher-tech improved MK1 version did much to keep it ahead of the chasing pack. Certainly it's not cheap - but then neither is anything else in this segment and at least you'll get a decent part of your money back at resale time. True, it doesn't have the showiness of a Range Rover Evoque or the ultimate handling feedback of a BMW X3, but many will still find this Audi a perfect balance between these two extremes. Resolutely hi-tech and resolutely real world, the Q5 remains resolutely right. 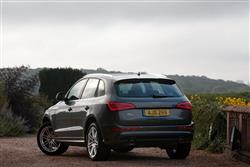 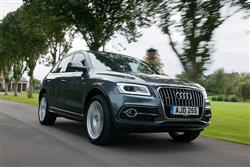 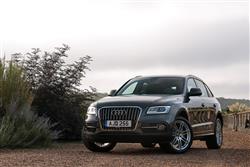 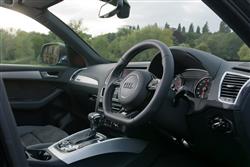 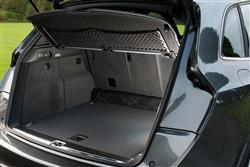 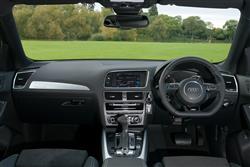