It used to be so simple - and so restrictive. If you wanted a genuinely rapid SUV, you had to buy something huge and unwieldy. In 2012, the Audi SQ5 TDI changed all that by offering us the world's fastest diesel SUV in a manageably-sized package. The brand's first ever TDI-powered 'S' model delivers a thumping 313PS packaged in a compactly practical bodyshape filled with the usual Audi good stuff inside. There's 540-litres of luggage space, comfortable seats for five and it can even get over forty miles from a gallon of diesel if you drive sedately. Yet it can climb a 31-degree gradient, cruise across a muddy field and on tarmac, charge to 62mph in five seconds. Truly a very special car.

Audi knows a thing or two about fast diesel sportscars. It won the Le Mans 24 hour race as long ago as 2006 under TDI power and since then, we've seen ever-more rapid and hugely potent V8 and even V12 diesel engines in cars like the A8 and the Q7. There was never though, a sporting 'S' model fuelled from the black pump. Until the 2012 launch of this car, the SQ5. Yes, it's an SUV. But it's an SUV unlike any you've probably ever experienced before. The key reason why lies beneath the bonnet. Tucked under there is a 313PS twin turbo TDI powerplant endowing this mid-sized 4x4 with phenomenal punch. Before this car was launched, SUV buyers in search of that sort of acceleration used to have to stretch up towards the lottery-winning pricetags demanded by top performance versions of much larger models like Porsche's Cayenne, Mercedes' M-Class or BMW's X5. In creating this performance flagship for the smaller Q5 range, Audi made things a little more accessible. With the SQ5, you have all of the practical aspects of a normal MK1 model Q5. That means it'll quite happily do the family duties, commute in comfort, put in a performance at IKEA and be low key enough for you to happily park on the street without a worry. Yet somehow, this model still retains the ability to outsprint a Porsche Cayman sportscar. Quite an all-rounder then. The car sold until Spring 2017 when it was replaced by a second generation SQ5 model powered this time by a 3.0 TFSI V6 petrol engine.

Audi has perfected its own unique and very subtle brand of design language that manages to underplay almost everything. Can you think of an extrovert-looking car in the company's mainstream product line-up? No, nor us. And the same theme continues with this MK1 model SQ5. You read the specification list and expect it to look like some sort of tarmac-grazing, testosterone-stuffed serial killer of a car that should carry an 18 certificate but in the metal, the overall effect is deceptively mild. Look closely though and all the performance cues are there, most notably emphasised by exclusive 'S' Sports suspension dictating a ride height that's sees this car running 30mm nearer to the ground than other MK1 model Q5s. The wheelarches are amply filled by large 20-inch alloys. And at the front, as well as the usual Audi 'S' model aluminium-look mirror housings, you get Xenon headlamps flanking a platinum grey single-frame radiator grille with galvanised twin struts in an aluminium finish, plus a modified bumper assembly. The rear makes a statement too, with a roof spoiler, an 'S'-specific bumper design and quadruple tailpipes. And inside? Well, like all Q5 models, this SQ5 has a spacious feel, emphasised by the way the sports seats sit you high up with a commanding view out over the less fortunate motorists you'll be shaping up to pass. Issues are few. It's not possible to position the seats so that you feel a little more sporty - a little more hunkered down in the car. And the chunky A-pillars can sometimes slightly obscure your view at junctions or roundabouts. That's about it. The cabin is of course beautifully appointed and the optional flat-bottomed sports steering wheel that many original owners specified sets it off perfectly. It's all primarily trimmed in black, but original owners who found all this a bit sombre could specify a 'lunar silver headlining' (which is more restrained than it sounds) and a variety of inset colours for the sports seats. These are electrically-adjustable, nicely bolstered and finished in soft nappa leather as standard. Some highlights? Well, we love the rubber and metal pedal set, the simple elegance of the dual-gauge instrument dial pack, the beautiful contrasts between dark and light finishes in the cabin and the S-specific touches. Features such as the S gear shift knob, plus further S badges on the door sill trims, the start button and the steering wheel. It's a cleanly styled dash too thanks to the reduction in button clutter made possible by Audi's well regarded MMI control interface. If you've got it in optional 'MMI navigation plus' form, you'll find that the number of fixed keys has been cut down to just four - Navigation, Telephone, Radio and Media. It all works effectively, but it's a system that rewards some dedicated learning time if you're to get the most from it. In the back, thanks to the long 2.81-metre wheelbase, the reclinable rear seat offers comfortable space for two adults - or three at a push, people who'll appreciate the 'Rear Bench Seat Plus' option which enables the rear bench to slide back and forth to prioritise either passenger legroom of luggage space. And talking of luggage space, well the 540-litre cargo bay (accessed via a usefully low loading lip) may not be the largest in the class but it's not far off it and is large enough to take four golf bags, which seems Audi's standard unit of volume. Weighty stuff can be taken too thanks to a 580kg payload capacity and there's also a useful under-floor compartment where you can throw wet and dirty gear or just items that you might want to keep out of sight. Plus you get a useful selection of hooks, power sockets and fastenings. Models fitted out with the optional sliding rear seat get a useful through-load system for longer items, but if you need more room than that, pulling the latches on the side wall of the luggage compartment automatically pushes forward the 60/40 split-folding rear seat to increase the capacity to 1,560-litres and offer up a maximum load length of 170cm. We also like the fact that if you give these levers another pull when the seat backs are retracted, the backrests rise up again to 45-degrees.

Issues with SQ5 TDI models are few and we struggled to find an owner with anything but fulsome praise for this car. As for things you should look for, well it's worth repeating the pointers we offered when reviewing the facelifted first generation version of the normal Q5. Here, one owner reported premature brake wear, another talked of excessive oil consumption and another had had a complete transmission failure. One owner had a problem with shuddering and bucking on inclines, something which was eventually traced to the need for a new fuel injector. As for minor issues reported that you might want to look out, well one owner had a problem with rattles in three areas of the car - in the driver's side door, in the driver's seatbelt mount and around the area of the cargo cover. It's unlikely that too many SQ5s will have been used off-road in anger but just in case, give a thorough check to the under body of the car and make sure those wheels are in decent shape. Wheel damage is more likely to have come from urban kerb stones than Rubicon trail boulders and so are the parking knocks that the SQ5 may have collected. Audi's quattro 4x4 system should prove reliable and the engines have all been used extensively in other Audi models so there should be little cause for concern there.

The world's fastest diesel SUV from the 2012 to 2016 period? You'd never know it from a casual glance, for this SQ5 is as subtle a sporting car as you could ever want. You have to look hard at the details - the quad exhaust pipes, the wider wheels and tyres and the silver-toned trim - to see there's something special here. Very special in fact. It's pretty hard to think of a single car of this kind from this period that can do so much so well. This one's quick, composed, economical, well-built, discreet and practical. As long as you're aware of its necessary limitations, it's even got a generous measure of fun fitted as standard. If you feel that you're owed something special - an indulgence if you like - but don't want to look like a mid-life crisis on wheels, an Audi SQ5 TDI could be exactly what you're looking for. It has all the outward trappings of measured responsibility with a slightly demented dressing of excess included. Nobody needs a car like this but drive it and you'll definitely want one. That much is guaranteed. 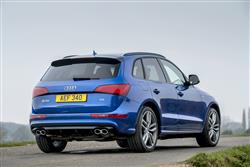 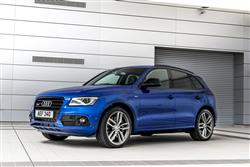 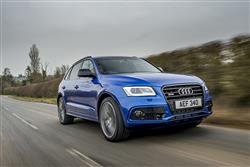 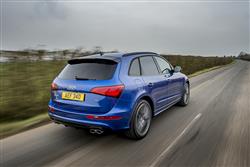 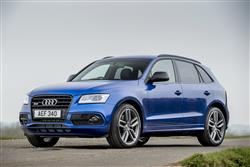 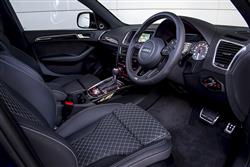