Audi's Q7 seven-seat luxury SUV has always made a big impact. The second generation 'Type 4M' model launched in 2015 was lighter, cleverer and smarter, with clean diesel and plug-in hybrid technology driving competitive standards of efficiency. As a result, if you really want a car of this kind from the 2015-2019 era, you may well find yourself really wanting this one.

Ever since the original 'Type 4L' version of Audi's Q7 large luxury SUV was first launched in 2007, it's been a vehicle that middle-England families have always rather liked but, if truth were told, felt a bit awkward about owning, the MK1 Q7's sheer size, power and weight hardly in keeping with these eco-conscious times. Hence, by 2015, the need for a version of this car that really was. Thiws MK2 model proved to be far lighter, more efficient - and slightly smaller too, though somehow even bigger inside. That was all possible courtesy of an all-new platform also designed for much pricier Porsche and Bentley SUVs. The result of all this - the MK2 Q7 first launched here in mid-2015 - was a model dynamically very different from the large, lumbering original version and far more technically advanced. It enabled the Ingolstadt brand to rejuvenate its proposition amongst large luxury SUVs. In 2016, a plug-in 'e-tron' diesel version was launched, as was a V8 diesel SQ7 variant. In 2018, Audi's new badging was introduced, which led to the volume 3.0 TDI variants becoming badged '45 TDI' and '50 TDI'. The original version of this 'Type 4M' model sold until 2019, when mild hybrid engine tech was added, along with a light facelift. But it's the earlier 2015-2019-era versions of this design that we look at here from a used car perspective.

The original MK1 version of this Q7 was one of the most imposing shapes on our roads. This second generation version though, was a little more subtle in its sizing, with sharp shoulder lines and chromed lower side sill blades helping to disguise dimensions that, though still considerable, saw this MK2 model being slightly shorter and narrower than before. Take a seat up-front and, as expected, you'll find one of the best interiors that Audi can offer, which makes this one amongst the very nicest it's possible to find in a luxury SUV from the 2015-2019-era. You're ensconced in a world of measured elegance, with beautiful ambient lighting, a luxurious blend of craftsmanship fused with technology and a wrap-around dash fashioned in a wide arc that spans the cabin, encircling the slim, sleek instrument panel. Its front, characterised in the passenger area by a distinctive air vent strip, isn't joined to the centre console, a design approach offering a greater feeling of space. The console itself is angled like a control stand, its right half being what Audi calls the 'technical area' dominated by a gorgeous aeronautical gear lever that makes you feel like you're bringing a 747 in to land. Just ahead of it is the chromed switchgear for the MMI infotainment system, a rotary controller and beyond that, a large touchpad with a scratch-resistant glass surface upon which commands can be traced with your fingertips. The main display interface for the system is an 8.3-inch high resolution screen that glides out of the top of the fascia every time the ignition is started, beautifully integrated into an overall dashboard design that no other premium brand can match in a car of this type from this period. Your middle row passengers will enjoy this kind of quality too of course and are well catered for in other ways. Despite the slightly more compact exterior dimension of this MK2 model, shoulder width somehow increased by 10mm, plus there was a 26mm increase in legroom too, aided by a sliding rear bench base. The 3rd row seats aren't really designed for adults; Audi says they're suitable for children of up to 36kg or 5.7-stone in weight. To be honest, a pew here as an adult wouldn't be too objectionable on a short journey, provided those in the middle row were prepared to push their seats right forward. Most of the time though of course, you'll probably be running the car with these third row chairs folded down, the retracting process operated electrically via cargo area buttons which make the process so much easier than the back-breakingly fumbly manual machinations you have to go through in a rival Land Rover Discovery to achieve the same end result. Once that's completed, there's a lot of room to play with, 770-litres to be exact in standard models. Otherwise, getting more room means folding the middle row. The backrest falls in a 35:30:35-split, so if you've a long item to push through - say a set of skis - you may merely need to flatten the centre section. Lower everything and as much as 1,955-litres of fresh air can be created in a standard variant.

Most owners in our survey seemed happy, though a few buyers complained of various rattles and squeaks, so look out for these on your test drive. Few Q7s will have been used off road, but check underneath just in case. The most reported faults related to interior trim and non-engine electricals. Look out for bodywork scrapes and kerb damage to the large alloys. We've had some reports of issues with wear to the side bolsters of the leather seats, as well as squeaking front brake pads, so it's worth looking out for both of those. There were a few issues with the car's infotainment system, with phones not connecting properly and flickering screens being the main problem. The DSG automatic gearbox should be checked to make sure it's had a regular oil and filter change, as should the quattro four-wheel-drive system. Many Q7s will have been company or lease cars and, as a result, you should check the condition of the bodywork carefully. The high-quality fit and finish of a Q7 also makes it an ideal candidate for clocking, so ensure the history is absolutely verified.

On the move, you won't have to travel very far to realise that this second generation model is a vast dynamic improvement over its predecessor. A new-generation 'MLB evo' chassis makes the whole car stiffer and contributes to massive weight savings also aided by the 'Audi Space Frame' aluminium-intensive architecture. As a result, though there are still sportier choices in this segment, the whole car feels more agile and responsive than its predecessor, with permanent quattro all-wheel drive splitting power 60:40 front-to-rear and incorporating a torque control management system that helps you maximise traction through the curves. Further handling stability is possible if you opt for a car whose original owner specified the extra cost all-wheel steering system. Performance comes courtesy of a 3.0-litre V6 TDI diesel engine that's offered with 218PS or with 272PS. This unit's also used mated to a 94KW electric motor in the plug-in hybrid 'Q7 e-tron' model. There was also a 430PS SQ7 V8 diesel version. All variants get the 'drive select' driving dynamics system, a set-up also used to control the functionality of the optional Adaptive air suspension. This smoothes your tarmac progress and can allow greater ground clearance off road, an environment in which this Q7 can be reasonably capable. It's also a refined cruiser and, with the optional 'Towing pack' fitted, an accomplished tower too.

It's rare to find a second generation model design representing such a seismic step forward from its predecessor. That's the case here though. In comparison to this MK2 model, the original Q7 was little more than a very luxurious blunt instrument in its approach to large SUV motoring. You could respect it for what it did but it was hard to admire it for what it was. Something radical was needed. In 2015, something radical happened. As a result, we were given this very different car, powerful, lightweight and agile, so at last relevant, dynamic and likeable. It's a big Audi SUV that, in an eco-conscious world, you could own proudly, rather than slightly awkwardly. A statement of technology and innovation with electronic intuition anticipating needs you didn't know you had. As well as simply a very plush and practical way to transport your household just about anywhere. It looks the part, the badge works for the boardroom, it's as capable off road as most will ever need and the seven-seat format is fine for families. True, there are rival large SUVs that are better to drive in this segment from this era - but none of them are as practical. And yes, there are certainly others that are significantly cheaper - but none of them are as advanced. In summary, we're left with a car that in this MK2 form, slimmed down and shaped up. In short, what we have here is simply this: a lesson in vorsprung durch technic. 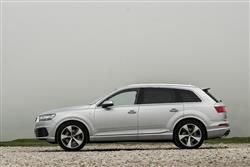 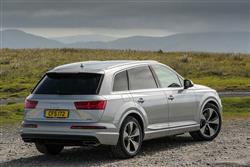 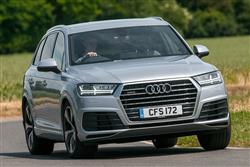 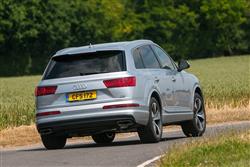 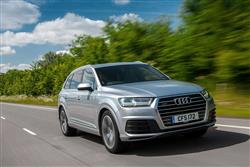 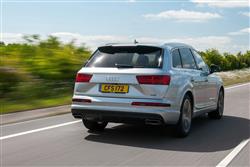