The Audi Q7 is a lot of things but perhaps its most obvious quality is just how conspicuous it is. There's really no way to blend in when you're driving a vehicle as huge as Audi's seven-seat super-SUV. If you're trying to make an overt statement, great, but for most of us, the big bruiser from Ingolstadt was just a bit OTT. With the sheer size of the thing comes all manner of notions of profligacy. When the Q7 first appeared in 2005, we ran a 4.2-litre petrol car and it went through fossil fuels like an oil tanker that had taken an Exocet hit. Aware of this, Audi took steps throughout the MK1 model's lifetime to try and make the Q7 a good deal more efficient, most significantly in 2011 introducing the improved first generation version we look at here. With this upgrade, the shape didn't change significantly but the oily bits underneath certainly did. Almost by stealth, the Q7 gained a certain relevance. That fact might easily have been lost on many buyers of big SUVs though.

You probably know the Q7 story, or at least the old testament. The original Q7 represented a late entry by Audi into the lucrative luxury 4x4 market. BMW's X5 and Mercedes-Benz's M-Class had been joined by the Porsche Cayenne and the Volkswagen Touareg in offering a more dynamic alternative to established vehicles like the Range Rover and the Jeep Grand Cherokee (yes, the GC was once a top-liner). When the first generation Q7 first arrived in late 2005, buyers got a slow 3.0-litre TDI diesel or a horrendously thirsty 4.2-litre FSI petrol unit. Other engines subsequently appeared to help ease this issue, but it wasn't until updates were made in 2009 that the Q7 really began to hit its stride. That was followed by the vehicle we look at here in more detail, the lightly facelifted Q7 that debuted in 2011 and was sold right through to 2015. This version's improvements brought optional LED headlights, an 8-speed transmission, start/stop fuel-saving technology, CO2 reductions and a wraparound tailgate design. A wider variety of both flat and metallic paint finishes were also offered. January 2012 saw order books open on a more economical Q7, the detuned 204PS version of the 3.0-litre TDI engine. This also introduced the S line Plus trim which incorporated metallic paint, 21-inch alloy wheels, Verano leather upholstery, privacy glass, hard disc-based navigation with Google Earth mapping, an in-car Wi-Fi hotspot, the Audi Music Interface iPod connection, powered tailgate operation, running boards and the 'Audi Parking System Advanced' set-up with a reversing camera. At the start of 2014, the S line Style and S line Sport editions were announced. These added £1,500 and £3,000 respectively to the price of 3.0TDI and 4.2TDI S line Plus editions.

Whatever your choice of Q7 - 3.0 or 4.2-litre TDI, 272 or 333PS 3.0 petrol TFSI or even 6.0-litre V12 TDI - you'll certainly find it to be well equipped - as indeed you'd have a right to expect for the kind of money being asked. All models come with the 8-speed tiptronic automatic gearbox, alloy wheels, air suspension, cruise control, sophisticated climate control and all the expected executive niceties. Popular options include steering wheel-mounted paddle shifters for the auto gearbox, a DVD sat nav system and a panoramic sunroof that covers all three rows of seats. Safetywise, twin front and side airbags are supplemented by curtain side airbags that provide head protection for all three rows, while the latest electronic traction, stability and braking aids should ensure that you'll never have to use them. S line models add larger 18-inch alloy wheels, xenon headlamps with LED daytime running lamps, sports suspension, upgraded Valcona leather upholstery and an exclusive S line exterior and interior styling treatment. Of course, where that sheer size pays dividends is when it comes to the cabin, over five metres of length freeing up space for the third row of seating you'd have to do without in obvious rivals like Volkswagen's Touareg, Porsche's Cayenne or the first generation Range Rover Sport. It's true that these extra rearmost seats are slightly compromised by the high floor needed for that high-riding SUV shape, but they'll be fine for kids of up to teenage size and adults on short journeys. The same comment applies to the middle seat in the middle row, which might tempt some into the extra-cost six-seater option which will see it replaced by a centre console. We'd want to keep the thing just in case though and provided it isn't occupied, then two adults should be very comfortable indeed here. Reclining seat backs will be welcome on long trips, whilst a seat base that slides by up to 100mm means that middle seat legroom or that of those behind can be maximised. In fact, depending on how you position everything, there are no fewer than 28 different seating and loading configurations. As for boot space, well there's 330-litres on offer with all seven seats in use - which isn't too bad - but with the second row slid right forward and the third row rearmost chairs folded, there's a class-leading 775-litres of fresh air available, with up to 2035-litres on offer should you further fold down the second row. Some original owners also specified an electric opening and closing mechanism for the tailgate which could be programmed to stop automatically at a preferred opening height so that it doesn't thump your garage roof.

Keep an eagle eye open for panel damage. The behemoth dimensions of the Q7 mean that many pick up city dings. It's 6'6" wide and a city width restriction is exactly the same width, so guess what happens when a Q7 driver gets a bit optimistic there. Many will have scrapes to the front wheel arches and rear quarters as a result. The alloy wheels are fairly kerb resistant in normal sizes but bigger rims can be chipped and scraped in short order. Any off roading more arduous than a gentle track can also see the Q7 damaged. Alloys again get scored very quickly and the exhaust system is not shielded in the way more serious 4x4s are. The interiors are tough and well screwed together and there is very little cause for complaint with the engines. The air suspension system has thus far proven reliable too. You'll probably find the best bargains with the most scope for negotiation on the 3.0-litre diesel models as they're the most common.

Twist the key in the volume 3.0-litre TDI diesel variant and there's a refined growl before you slot the 8-speed automatic transmission into Drive and enjoy the extra smoothness that this gearbox enjoys over the 6-speeder it replaced in the pre-facelift version of this car. If you know anything about this genre of luxury SUV - or of the Q7's development history - you could even perhaps predict the way it might handle. This car does, after all, share basically the same underpinnings as two of its toughest luxury rivals, Volkswagen's Touareg and Porsche's Cayenne. Given Audi's brand remit to chase down BMW, you'd expect it to out-handle the Volkswagen but not to quite rival the dynamic drive you'd pay extra for in the Porsche. Which is pretty much how it turns out. And that means a very impressive set of handling manners indeed for something weighing all of 2.5-tonnes. Of course, the Q7 needs some fairly advanced technological assistance to be able to achieve such a result. The variable-height adaptive air suspension fitted to all models is just the start, offering as it does a 'Dynamic' mode that controls body movements in a way that'll be welcome if you've a twisty road to tackle and you're running late for the school play. And of course, there's a permanent quattro 4WD system very much designed for tarmac territory, with 40:60 front-to-rear torque split that offers a nice handling balance for brisk driving and a Torsen centre differential that can instantly apportion power to whichever wheel can best use it. Which of course doesn't do this car's prospects any harm in the rather unlikely event of you finding yourself seriously off road. The 8-speed gearbox's more efficient low range transfer case should easily help extract you from most terrain you really shouldn't have ventured onto in the first place, while the standard five-mode air suspension with its variable ground clearance of between 180 and 240mm helps iron out surface imperfections. The off road setting, with 205mm of clearance and adapted damper control, is well chosen for all but the most arduous cross-country driving. The Q7 can ford water that's 535mm deep, climb slopes of up to 31-degrees and drive on a sideways tilt of up to 25-degrees before falling over. More importantly perhaps, there's a clever towing stability system that can help you haul up to 3200kgs of braked trailer. Move the gear selector to the 'S' (for 'Sport') position and sixty from rest occupies about eight seconds in the 245PS 3.0-litre TDI diesel variant, the one almost all Q7 customers choose. You can see why. The alternative - and much thirstier - supercharged petrol 3.0 TFSI V6 is no faster in 272PS guise and much pricier with 333PS on tap. We think if we did really want a Q7 capable of reaching sixty in under 7 seconds, the 340PS 4.2TDI diesel would be a better bet. That's if we couldn't stretch to the 500PS 6.0-litre V12 TDI variant.

The Audi Q7 makes an interesting used pick and the first generation version made more sense in this later post-2011 guise. So many buyers miss the improvements Audi made throughout this vehicle's lifetime, simply judging it as a gluttonous leviathan and disregarding it straight off the bat. In fact, the truth is that a later 3.0-litre TDI diesel model - the kind of car we've been looking at here - is actually about as green and frugal as a 2.0-litre Ford Mondeo weighing half as much. On the quiet though, we'd also point out that the pokier 4.2-litre TDI diesel might just be the sly bargain here, this variant's price premium over its 3.0-litre TDI diesel stablemate being slashed by the used market. Either way, negotiate hard and you can pick up a Q7 that's got years of life in it for about the price of a decent diesel medium range hatch. If you're looking for a car of this sort, it's hard to go too far wrong with a proposition like that. 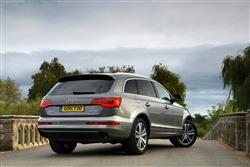 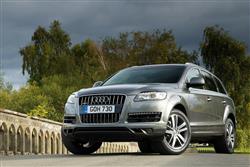 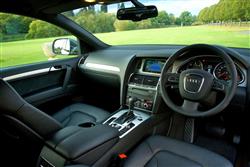