By now you should know what to expect from a 2.0-litre Audi TT but this third generation model still has a few surprises up it sleeve. Jonathan Crouch looks at the entry-level 40 TFSI variant

You may think you know the Audi TT - but perhaps you don't. The Ingolstadt brand has refettled its little sportscar in recent times, with key upgrades - especially beneath the bonnet. Plus there's a fresh badging structure that sees the entry-level version re-branded the '40 TFSI' while swaping out its old 1.8-litre petrol engine for a 2.0 TFSI unit with 197PS. As usual, there's a choice of Coupe or Roadster bodystyles.

Old motoring prejudices can take a long time to overcome. Take the Audi TT as an example. When it was first launched back in 1998, it was criticised for being a touch dull to drive. Actually, the package on offer was pretty well pitched for the needs of most likely buyers - and Ingolstadt gradually fettled it further over the years. The second generation model was under-rated too, as has been this MK3 version. In response, this German brand has updated the range and added in extra equipment and a new 2.0-litre engine at the foot of the line-up to replace the previous 1.8-litre TFSI powerplant. There's a new badging structure too, which kicks off with the '40 TFSI' variant we're going to look at here. It uses the 2.0-litre petrol engine that the range hinges around. Does it offer anything for keen drivers?

Where there used to be a single 2.0 TFSI engine available to TT buyers, now there are two - an entry-level unit developing 197PS (badged '40 TFSI') and a version of the previous 2.0-litre engine which now gets a boost to 245PS (and new '45 TFSI' badging). There's now no longer a diesel option. The sporty TTS variant isn't our focus here, but we'll tell you that it retains its existing badging but gets a slight reduction in power (306PS, down from 310PS) but a little extra torque to compensate, so the rest to 62mph sprint figure (4.5s) is actually fractionally improved. In conjunction with the 197PS 2.0 TFSI engine, customers have the choice of a six-speed manual gearbox or a seven-speed S tronic dual-clutch auto transmission. The 245PS unit is available with either the manual gearbox and front-wheel-drive - or with S tronic auto transmission and the multi-plate clutch-based quattro permanent all-wheel drive system. Both versions of the TTS feature quattro as standard. In both transmission types, the close-ratio lower gears enable powerful acceleration, while the wide ratio of each transmission's highest gear reduces the engine speed and with it fuel consumption. By networking quattro drive with the standard 'drive select' driving mode system, the TT driver can adjust the operating parameters of the all-wheel-drive system to suit his or her individual requirements. In "auto" mode, optimum traction and balanced driving dynamics are given priority. In "dynamic" mode, torque is distributed to the rear axle earlier and to a higher degree. In the drive select "efficiency" mode, the set-up can temporarily shut down the quattro system if conditions suit this. Audi's magnetic ride adaptive damper control system is fitted as standard to the TTS and is optional for all other versions.

One thing's for sure. Even if you'd never seen this car before, you'd know it was an Audi TT. Some commentators have been a little disappointed in how safe Audi has played the exterior styling but this is still a very good looking little coupe with some lovely design touches. The fuel flap on the right side panel for example, is the classic race-style circle surrounded by socket screws, with no filler cap beneath the flap. This means that there is nothing to be unscrewed and the pump nozzle slots straight into the tank neck. As for styling changes to this enhanced model, well the main one is a revised design for the three-dimensional Singleframe radiator grille and larger side air inlets. As usual, there's also a cute open-topped rag top Roadster bodystyle available if you want it. Inside, the fascia is dominated by the Audi Virtual Cockpit, now featuring an additional sport display providing information on engine output, torque and g forces. Located directly behind the steering wheel, a 1440 x 540 pixel, 12.3-inch digital screen shows all information directly in front of the driver. Operated via the MMI Touch button, voice control and the multi-function steering wheel, the display can be switched between 'classic', with prominent speedometer and rev counter, or 'infotainment', which brings functions such as the navigation map or media to the fore. The round air vents - a classic TT feature - are reminiscent of jet engines with their turbine-like design. The vents also contain all the controls for the air conditioning system, including seat heating where applicable, plus temperature, direction, air distribution and air flow strength. As an option, they can also house small digital displays which show the chosen setting. A 2+2, the TTS Coupe gets a load area with a capacity of 305-litres, which can be extended by folding the rear seat backrests forwards.

Prices kick off at just over £30,000 for the base 40 TFSI 197PS model in Coupe form. You'd probably be paying closer to £35,000 if you chose a 45 TFSI Coupe, then added in a few well chosen extras. As usual, in either case, there's a premium of around £1,800 for the Roadster bodystyle. There are three trim levels in the mainstream range - 'Sport', 'S line' and 'Black Edition'. As for spec changes made to this revised version, well 'S line' and 'Black Edition' models get smart new wheels, respectively 19 and 20 inches in size. Inside, 'Sport' and 'S line' versions receive folding door mirrors and heated seats, and on top of these the 'S line' specification is also enhanced by the addition of even more supportive Super Sports Seats. The upgrade from there to Black Edition now brings the addition of Piano Black inlays and a new Chrome Slate Grey finish for selected interior elements. Options across the range include the advanced key for push-button starting, hill hold assist, high-beam assist, the LED interior lighting package, front seat heating and the storage and luggage compartment package. The connectivity package features the touchpad-based MMI touch system. At the top of the modular range is the 'MMI Navigation plus' set-up with its flash memory, two card readers, DVD drive, Bluetooth interface and voice control system.

The TT has always been one of those cars where once you'd stumped up the asking price, ongoing costs were agreeably modest. This latest model continues that trend. With the base 197PS 2.0 TFSI powerplant of the 40 TFSI model, you're looking at close to 50mpg on the combined cycle and under 140g/km of CO2. Even if you opt for the punchier 245PS 2.0 TFSI petrol engine of the 45 TFSI variant, you'll get very similar returns - and you could actually improve on them by nearly 10% of you select the optional 7-speed S tronic auto gearbox. When the Audi drive select system is set to its 'efficiency' mode, the S tronic transmission decouples and 'freewheels' each time the driver takes his or her foot off the throttle pedal. All up, the TT 2.0 40 TFSI weighs just 1,230kg thanks to the extensive use of aluminium chassis members, body panels and suspension componentry. Buyers get a three year 60,000 mile warranty and residual values look extremely strong indeed. Still want that Cayman?

The Audi TT remains a strong contender with a 2.0 TFSI engine under the bonnet. Choose front or all-wheel drive chassis, manual or S tronic transmissions and Sport or S line trims. Even the 40 TFSI entry-level model will get through 62mph in just 6 seconds, hit 155mph and yet it'll still return almost 48mpg. Look under the bonnet and you'll find much the same 2.0 TFSI petrol unit you'll find in the Golf GTI, tuned in this instance to 197PS. The TT rides on much the same MQB chassis as the god-like GTI too. This is now a seriously capable driver's car. And a seriously likeable one too. 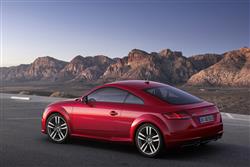 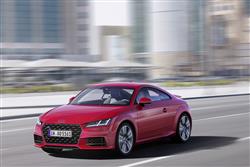 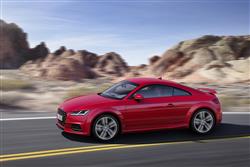 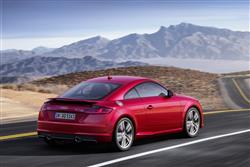 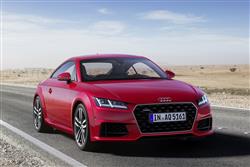 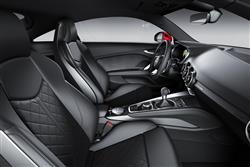