Sometimes it pays to accept that the people who work in car manufacturer design departments are cleverer than you are. Once you've surrendered to this knowledge, it's far less likely you'll make a giant prat of yourself by, let's see, claiming that Audi had lost the plot with the second generation TT because the design had been watered down too much. Several thousand sales later, hats, words and humble pie is being eaten by motoring journalists across the globe. Audi got it right with the TT Mk II. Here's how to track down a decent used example.

There's a good deal to be said for not trying too hard. When Audi announced the second generation TT, I must admit that I was expecting a train wreck. I was sure that Audi would try once again to shift the goalposts much as the original TT did upon its launch in 1998. Not optimistic about their chances of success, most in the office figured we'd be seeing something that looked as if it had fallen out of the ugly tree and clouted every branch on the way down. Not so. Although Walter De Silva's design could stand accused of playing it safe, it's a handsome car and that, above all, was what sold the old TT. Look a little closer at the technical specifications and it's clear that Audi was intent on progressing the TT as a driver's car, something for which the old model never really garnered a solid reputation. A series of high profile crashes caused Audi to emasculate the old TT, modifying the suspension, fitting ESP stability control to all models and adding a rather ugly rear spoiler. In reality, all the TT did was what any 'proper' performance car does and that is allow a degree of oversteer when lifting off the throttle. Enthusiasts call this 'chassis adjustability' but the TT didn't sell exclusively to enthusiasts - hence the embarrassing about face. The latest car respects the limitations of its target audience - to a degree. Launched in September 2006 in both fixed head and drop top body styles in either a 2.0TFSI front-wheel drive guise or 3.2-litre V6 quattro form, the TT was a far more satisfying drivers car than the original. The TT-S model, launched in 2008 in both coupe and roadster forms - is a car that won't make you feel too sore if a Porsche Cayman is beyond the budget. If budgets are tight, the TT TDI diesel, launched concurrently with the TT-S, might be just the ticket. The range got bigger still with the introduction of the entry-level 1.8-litre turbo Roadster model in 2009 followed by the mighty TT RS with 340bhp from a 2.5-litre five-cylinder turbo engine.

The cabin of the TT also has high standards to live up to. Even today, the old TT's cabin feels anything but old. Yes, all-round visibility is woeful but that fascia still feels smart, the much-copied aluminium finishes and buttress bars remain slick pieces of detailing. The latest car reprises the old model's look and feel, with the chrome-ringed speedo and rev counter housed in their own cowl and the round air vents, but also adds a few contemporary design touches such as the flat-bottomed steering wheel, the angled centre console and a sportier seating position. There's more rear kneeroom and luggage space but headroom in the back could still be generously described as woeful. The chassis of the TT isn't enormously different in fundamental layout to something like a Volkswagen Golf but whereas the Golf uses steel for its suspension components, the TT uses expensive and lighter aluminium. What's more, Audi have pioneered a method of using aluminium and steel components in tandem with each other, overcoming the electrolytic corrosion issues that have plagued other manufacturers who have tinkered with this approach. Some 69 per cent of the body is aluminium with the other 31 per cent steel, which means that the 2.0-litre turbo model is 60kg lighter than the old 1.8-litre six-speed car. The S-tronic twin clutch gearbox option (the gearbox formerly known as DSG) adds 20kg to that figure while the 3.2-litre car tips the scales at 1,445kg. The Roadster's hood is a traditional fabric affair, one of the key reasons why the weight penalty has been kept to a mere 35kg over the Coupe. Electrohydraulically operated, it uses a steel and aluminium framework to pare further grammes from its bulk. Were it not for an additional layer of soundproofing, it would be even lighter. It's easy to see where weight could be saved. Instead of the heated glass rear window Audi could have used a vinyl item and rather than opting for a powered mesh wind deflector they could have opted for a pull-up screen. This being Audi, however, they didn't and you won't begrudge the extra few kilos these features add when driving the car. A clever Z-fold system means that the rigid forward section of the roof folds down on top of the remainder, eliminating the need for a tonneau - so often the inelegant engineering solution on convertible cars. What's more, the roof operates in a mere 12 seconds and can be operated at speeds of up to 30mph. While the guy who bought a convertible with a metal folding hard top roof is amazing passers by with its origami tricks, he's not only missed the lights but will also get the stink eye from his lady after a snap shower made her blouse go see-through. The TT Roadster requires no manual clipping or latching to the header rail either. Just fire and forget.

The niggles with the original TT such as the coil pack woes of the 1.8T engine, the errant tracking and the rather hit and miss colour palette of early cars have been well and truly rectified with the latest generation car. The 2.0TFSI engine, the 2.0-litre TDI diesel and the 3.2-litre powerplant have all earned a reputation for strong reliability. Even the complex mechanical parts like the electrically folding hood have thus far proven gremlin-free.

(approx based on a 2007 2.0 TFSI Coupe) Audi consumables once had a reputation for costliness, but whilst they are a bit pricier than Ford or Vauxhall, spares are by no means exorbitant. An air filter costs in the region of £65, whilst a fuel filter is £25 and an oil filter £35. A set of spark plugs will be around £70.

As you'd expect given such light weight, performance is strong. The 197bhp 2.0-litre turbo TT posts a sprint to 60mph in 6.6 seconds (6.4 with DSG) before running on to a top speed of 149mph. The 3.2-litre car makes 60 in 5.9 seconds (5.7 with DSG) and hits an electronic limiter at 155mph. That's a whole new plane of performance for the TT and also represents a more sensible product mix. It was slightly bizarre that the old TT quattro Sport with 237bhp was, due to its lighter weight, quicker and more capable than the flagship 3.2-litre car. At least now there's a product hierarchy that's easy to grasp. The TT-S is quicker still. Its 2.0-litre turbocharged engine and four wheel drive may not be original but it's a template that has produced some iconic sports cars down the years. The 60mph benchmark is 5.0 seconds away in the manual TTS Coupe, with the top speed pegged at 155mph. Choose the S tronic dual clutch sequential transmission and that figure is shaved down to 4.8 seconds; serious pace by virtually any measure. Many will ask will be whether the TT TDI diesel model is quick enough. Clearly this depends on your definition of fast, but a sprint to 60mph in just 7.2 seconds on the way to a top speed of 140mph is a decent showing from this 169bhp engine. Quattro four wheel drive helps you get the power onto the tarmac too. Revving to 5,000rpm, this diesel engine is an impressive unit and the torque figure of 350Nm knocks the 2.0T petrol model's 280Nm into next week. Even the 3.2-litre V6 quattro models only manage 320Nm. Overtaking, therefore, is not a big problem for the TT TDI.

Some used car buys are genuinely hard to fault and the TT is one of them. Demand has kept prices buoyant, so don't expect to scalp somebody for a big bargain. The pick of the range is probably the 2.0TFSI with the S tronic gearbox but whichever TT model you opt for, you're getting a car that talks more quietly but punches a whole lot harder than its predecessor. 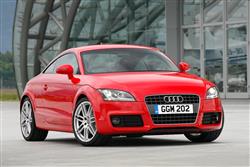