The BMW 1 Series Coupe didn't get off to the happiest of starts. Without being overly diplomatic, it looked a bit funny. That tall, top hat-like glasshouse coupled with its stubby proportions didn't rest easy on the eye. That said, few disagreed that it was better looking than the hatchback it was spawned from. Let's just say that the mid-Noughties probably aren't going to be remembered as a seminal era in BMW styling. As we've grown used to the 1 Series Coupe's odd silhouette, it's become a little easier on the eye and the facelifted cars from 2011 even became reasonably handsome in the right light. It's now possible to pick these up for about what you'd pay for a new supermini. Tempted?

The BMW 1 Series Coupe took its time to appear. The hatch on which it was based had been on sale for fully three years before the two-door car debuted in December 2007 but we're going to press the fast forward button and spool on to 2011 when BMW revised the styling of this model very subtly. The front end saw the addition of a re-styled front bumper, smarter front foglamps and redesigned Halogen headlamps with what BMW calls an 'eyebrow' element, particularly noticeable when xenon headlamps were specified thanks to an LED illuminated light bar. There were also improved aerodynamics that contributed to lower carbon dioxide emissions. Smarter technology such as the BMW ConnectedDrive systems also became available on the 1 Series Coupe. This included new information systems such as the Speed Limit Information set-up with No-Passing Info and the Lane Departure Warning System with Collision Warning. At the same time as the range was tweaked, BMW introduced a limited number 1 Series M Coupe flagship. The car was an instant hit with both press and public, BMW selling 400 cars in the UK before the model was deleted in November 2012. It's since gone on to become a real collector's item.

This Coupe range cherry-picks only the very finest engines from the 1 Series hatchback line-up. So petrol people choose between the 170bhp 120i, the 218bhp 125i, the 306bhp 135i and the 337bhp M Coupe. Diesel drivers meanwhile, choose between three versions of basically the same 2.0-litre engine, the 143bhp 118d, the 177bhp 120d and the twin-turbo 204bhp 123d. Think twice about opting away from the sweet-shifting 6-speed manual gearbox you'll find across the range, but if you must have an automatic, then BMW offers a superb item in the 1 Series. Whichever model you go for, you should find it to be decently equipped. Stung by criticism that the original pricing structure for this car was a bit rich, BMW has moved to justify it by increasing standard equipment which on the facelifted version ran to alloy wheels, power windows and mirrors, air conditioning, auto headlamps and wipers and a decent quality MP3-compatible stereo. You may find it a little irritating though that the pokiest petrol and diesel variants are only available in the priciest M Sport trim. Safety kit runs to six airbags, plus the usual electronic assistance for braking, traction and stability control to hopefully ensure that you'll never have to use them.

Not a lot goes wrong with these. The high pressure fuel pump issue that affected the 3.0-litre turbo petrol engine had been solved by the time the 1 Series Coupe was facelifted in 2011 so no worries in that department. Look for crash damage and cremated rear tyres and check when the car has been serviced. BMWs have variable mileage indicators so you might well be able to glean how hard the car has been driven by when it's been serviced.

Thanks to the efforts of the BMW marketing department, many of us are pretty well aware of what the main tenets of the brand actually are. The hallowed 50:50 weight distribution is the obvious one, derived from the classic engine at the front, drive to the rear layout. Then you have the world-leading engine technology, the kidney grille, the unfussy interiors and the over-riding driver focus. BMW is a company that's acutely aware of its heritage but also one that's not afraid to break with tradition if it's deemed to be in the interest of the products. And this improved 1 Series Coupe? Well it has something of the old and the new about it. The 'old' aspect is something BMW should never mess with, a basic ethos that defines exactly why this car is so good to drive. Ideal axle load distribution, optimised aerodynamics, long wheelbase and low, ideally balanced centre of gravity combine with rear wheel drive to give its unique agility. But that's all marketing talk. You settle in behind the wheel and all feels right, the driving position perfect: already, you're feeling like driving rather than merely travelling. Punch the starter button, set off and you find yourself looking forward to finding a road that will put the Bavarian maker's bold claims for this car to the test. Find one and you also find yourself pushing a little harder than you might normally - just to see. Sure enough, power into a corner, dab the brakes, turn the wheel and it's true. There's a feeling of uncanny control. Nor do you need the really fire-breathing engines to fully enjoy what the engineers have created in this car. Across the range, the slick-shifting 6-speed manual gearshift is lovely and the steering feelsome - and even better in the pokiest petrol models that stick with a hydraulic rather than an electrically-powered set-up. The ride's good too, suppler than you'll find on a 1 Series hatch, despite this car's cornering sharpness. It's as well though that the German marketeers decided not to carry across the feeblest engines from the 1 Series hatchback into this facelifted 1 Series Coupe line-up. Which means that the range begins with 142bhp 118d or 177bhp 120d diesel models or, if you prefer not to fuel from the black pump, 170bhp 120i or 218bhp 125i petrol derivatives. Given that the slowest of these (the 118d) makes sixty from rest in 9.0s on the way to 130mph, you'll get some idea of the performance potential lurking further up the range. Which of course is where the really exciting powerplants lie. The first of these, you may be surprised to learn, is a diesel, the 123d being our personal pick as the world's finest. This 2.0-litre unit was the first all aluminium oil-burner in the world to achieve a specific output of over 100bhp per litre. Twin turbos help it to 204bhp, 0-60mph in 7s dead and a 148mph top speed, while the ability to cover 40-60mph in just 4.1s means you can slingshot past slower-moving traffic as if it wasn't there. This, in other words, is a really quick car and rival marques have hulking great six-cylinder diesels that can't match it. The petrol pocket rocket in the standard range is the 135i with a 306bhp 3.0-litre twin turbo straight six that catapults this car to sixty in just 5.3s on the way to an artificially-limited maximum of 155mph. Just as well then, that there are uprated brakes with six piston calipers to help scrub off all that speed and an electronic differential lock that helps to apply it to the tarmac out of tight corners. Already in this form, this 1 Series Coupe is faster than any six cylinder BMW M3 - which you'd think would be quite quick enough. But not for BMW's Motorsport division. Hence their M Coupe, a car in which that same 3.0-litre engine was tweaked to 337bhp, rest to sixty falling to just 4.7s. This is enough to severely frighten V8-powered BMW M3s: maybe even to see them off if the going is especially twisty.

Few expected the 1 Series Coupe to gradually morph into BMW's finest driver's car. It almost got there by stealth but here's a car that, through very modern means, harks back to an ideal we thought had been forgotten in Munich. Fun. We can guarantee that even the lowliest diesel 1 Series Coupe is more entertaining to thrash along a country lane than the 500PS+ M6 coupe. It has a balance and wieldiness to it that makes it feel wholly on your side. It's not too wide and you can see out of it. Prices are reasonable as long as you're not looking at the prized 1 Series M Coupe. Is this the best used BMW you can buy right now? By a country mile. 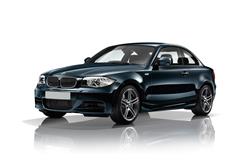