We all thought the original 1 Series was a challenging piece of design until BMW whipped the wraps off the second generation car we look at here. Here was a model with styling that continued to polarise opinions, even if few were divided on the excellence of its engineering. As is the case with many BMW models of this era, as time passed, the styling became less of an issue and these days a used 1 Series from 2011 to 2015 looks a very tempting proposition. Here's the low down on what to look for.

With the introduction of this second generation 1 Series design in 2011, BMW did more than just tinker with the styling a bit. The name gained the 'Sports Hatch' moniker for three and five-door versions, though few beyond the Munich maker's marketing people ever used this. More importantly, the MK2 model was 83mm longer, 14mm wider and 30mm longer in the wheelbase than the car it replaced. This meant that rear-seat passengers could benefit from a further 20mm of legroom. Materials quality inside stepped up a couple of notches and the iDrive infotainment system was further developed to aid user friendliness. Above all, this generation 1 Series was distinguished by the step change in efficiency it delivered. At launch, the range consisted of two innovative four-cylinder petrol engines and three redesigned four-cylinder diesel units. The turbocharged BMW 118i produced a maximum output of 170hp at 4,800rpm, while the more affordable 116i also featured a twin-scroll turbo, making a more modest 136bhp. The diesel engines picked up the lion's share of sales and were thoroughly overhauled. The 120d added 7bhp to its predecessor's output, taking maximum power to 184hbp at 4,000rpm. There was also a 143bhp 118d variant and a 116bhp 116d version. Six-speed manual transmissions were standard fare or there was an eight-speed automatic transmission. The auto 'box was also available in Sport configuration, which allowed for punchier gear changes - or you could take full control via the shift paddles on the steering wheel. In summer 2012 we got the 316bhp M135i, a car which absolutely rocked the hot hatch market, delivering serious firepower for under thirty grand. Every other superhatch manufacturer suddenly had to reassess their value proposition. BMW also added the 114d in late 2012, this 1.6-litre version of the four-cylinder diesel engine with TwinPower Turbo technology developing a fairly feeble 95bhp. The brand also introduced an all-wheel drive 120d xDrive variant in 2013. This MK2 model 1 Series model was extensively facelifted for the Spring of 2015.

One consequence of running a transmission tunnel through what was a rather compact hatch was always rather compromised accommodation. While this fundamental issue never went away, BMW loosened the 1 Series' belt a little with this second generation car and the result is that it feels a good deal bigger inside. In addition, there's a good deal more storage space, with large front door pockets, two cup holders on the centre console and a roomy glove compartment. Out back, there's 30-litres more luggage space compared to its forerunner, taking the total to 360-litres. Fold the 60/40 split rear seats flat and this can be increased to a maximum of 1200-litres. Build quality improved as well, with more substantial plastics used throughout. BMW's much-improved iDrive system features on all models from SE level and features a higher definition 6.5 inch flat screen. The shark-nosed exterior styling takes a bit of getting used to, but most would agree that the profile looks a lot cleaner on a MK2 1 Series model, with the banana curve of the old car's sills being straightened. The rear end meanwhile, is a good deal more muscular with tidier detailing. BMW's entry-level trims have never been particularly well appointed but the latest 1 Series isn't too bad in this regard. Expect to find satin silver interior trim and Move cloth seats, a leather-trimmed steering wheel, a chrome exhaust and keyless start. Step up to SE specification and highlights include the iDrive infotainment system, a Bluetooth hands-free facility with USB audio interface and a multi-function leather steering wheel with a speed limiter function. The Sport trim level features sports seats, a leather sports steering wheel, high-gloss black interior trim with Coral Red or grey accents, 17-inch star-spoke alloy wheels, a dark chrome exhaust pipe and a high-gloss black kidney grille, a central air intake trim, side intake surrounds and rear bumper trim. A less familiar trim level worth seeking out is the Urban model, which includes Metro cloth/leather seats, a leather sports steering wheel and an acrylic glass interior trim in black or white with Oxide Silver accents. The exterior is finished with 17-inch V-spoke alloy wheels and a chrome kidney grille with white slat sides and trim bar for the central air intake.

Not a lot goes wrong with these. The high pressure fuel pump issue that affected the 3.0-litre turbo petrol engine had been solved by the time the original 1 Series was replaced in 2011, so there are no worries in that department. Look for crash damage and cremated rear tyres and check when the car has been serviced. BMWs have variable mileage indicators, so you might well be able to glean how hard the car has been driven by when it's been serviced.

The hallowed 50:50 weight distribution is present and correct, derived from the classic engine at the front, drive to the rear layout. Ideal axle load distribution, optimised aerodynamics, long wheelbase and low, ideally balanced centre of gravity combine with rear wheel drive to give its unique agility. Well, most 1 Series hatches are rear-wheel drive, BMW quietly slipping xDrive all-wheel drive models into the range in 2013. The chassis balance remains as good as ever but a wider track (51mm at the front and 71mm at the rear) than its predecessor makes this car even more planted through corners. The turbocharged BMW 118i zips from zero to 62mph in just 7.4 seconds, going on to a maximum speed of 140mph, while the 116i can cover the sprint to 62 in a spry 8.5 seconds. Keen drivers will absolutely adore the M135i though. Sending 316bhp to your rear wheels in a car this small just doesn't get old. The 3.0-litre turbocharged six-cylinder engine is one heck of a motor and offers near supercar acceleration figures. In fact, it'll rocket to 62mph in just 4.9 seconds and keep going to an electronically limited 155mph. Of course we could discuss for ages whether a car that makes going fast this easy is a more satisfying choice than a vehicle that's slower but which makes you work for the performance, but let's just say that different people like different things from their hot hatches and coupes. Besides, the BMW can be surprisingly flexible. Press the Sport button and you immediately notice the steering weight up and the throttle response sharpen. Press the button once more and you'll find Sport+, which partially disengages the stability control and offers an even spikier throttle pedal. Suddenly the M135i will feel as if it has teeth.

This second generation 1 Series Sports Hatch model played a major part in enabling BMW to raise total 1 Series sales over the two million mark. Which is not bad considering the entire history of this model line stretches only as far back as the MK1 version's original launch in 2004. To put this sales performance into perspective, it took Mazda over a quarter of a century to sell a million of its popular little MX-5 sportscars. Essentially, the 1 Series worked because it was a hatch you could downsize into from a bigger car and fairly easily graduate up to from the massive-selling Focus, Golf and Astra class. And it probably would have done even better if the first generation version had had more appealing styling. This MK2 model Sports Hatch design was a lot easier on the eye - which is why with this car, sales really got into their stride. It's still not the prettiest thing you can buy in this sector, but when you're inside, pedalling it with a bit of gusto, who cares? Show us a sharper steer in this segment and we'll be very impressed indeed. 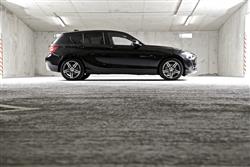 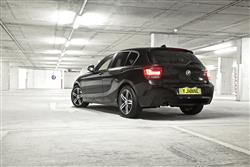 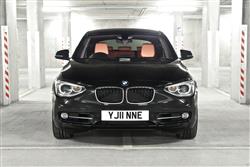 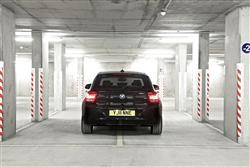 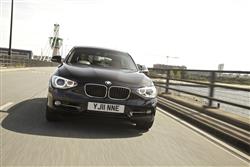 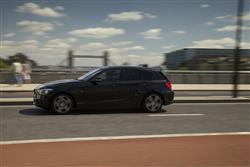