Sharp handling and a range of outstanding engines make BMW's first generation 'F22'-era 2 Series Coupe a unique choice in the segment for compact sports coupes from the 2014-2021 period. The car delivers all BMW's best bits distilled down into a compact driver-focused package.

Turn the clock back to the late Sixties and early Seventies and you'll find that BMW used to have a younger age profile. The customers who bought cars like their much loved 2002tii and 2002 turbo models were the kind of youthful, free-spirited people who would otherwise have gone for an Alfa Spider sports car or a Mini Cooper. But the Bavarian marque doesn't make machines like that any more - or does it? Proof that they do was delivered in 2014 in the form of this model, the MK1 'F22'-era 2 Series Coupe. It was launched as a replacement for the 1 Series Coupe model that had been charming enthusiasts since 2007. Not even they though, could ever have described a two-door 1 Series as an attractive-looking thing. This car, in contrast, sat much easier on the eye and, with any coupe, that's half the battle won. This was a little rear wheel drive coupe in which the folds of the company's corporate approach were shaken out a little. The racy 225d diesel and 228i petrol models were mainstream range highlights and a spirited drive in either is enough to make a rival Volkswagen Scirocco - or indeed BMW's larger 4 Series Coupe - from this period seem rather dull. Best of all are the potent six cylinder M235i and M2 variants, offering near-supercar levels of performance. The M2 (F87) was introduced in 2015 with 370hp. The 2 Series Coupe was joined by a Convertible version (F23) shortly after launch. In 2017, both line-ups were facelifted and the M235i was uprated to M240i status. In 2019, the M2 was replaced by the M2 Competition model with 410hp. The rare M2 CS sold between 2019 and 2020. F22 Coupe range was replaced by a second generation model in late 2021 only offered in fixed-top form, so the Convertible F23 range carried on for a little longer.

Is this the most stylish small BMW coupe ever made? Many will think so. This car's predecessor, the old 1 Series Coupe, featured a blend of aesthetics that was never quite as comfortable as it could have been. From some angles it looked great, all muscle and attitude, while from others it looked about as elegant as Jimmy Nail in Jimmy Choos. With this 2 Series though, it was a very different story. Squint and you can see elements of the previous 1 Series Coupe model in the shape of the glasshouse, but some of that old awkwardness went here, replaced by a far more elegant, cohesive look. Some might not see this car as being quite as good looking as the bigger 4 Series Coupe from this period, but it's nevertheless a handsome thing. Don't worry: the neighbours will certainly notice. And inside? A driver-focused car should have a driver-focused cockpit - and this one does. In fact, there are very few small sporting models from this period that set you up better behind the wheel. Take a look around and it's functional rather than flash, with the Munich-maker's familiar design language of two black-faced instruments in a driver-focused cowl. There's certainly plenty of space to stretch out given this car's compact dimensions, though headroom will be a touch restricted if the optional glass sunroof is fitted and shorter drivers might feel as if the high waistline of the car is a bit enveloping. Over the shoulder visibility's a bit restricted too. Drivers used to the old 1 Series Coupe will find the front three-quarter vision better though, thanks to slim A-pillars. Otherwise, the cabin will hold few surprises for existing BMW owners. Though there are a few plastic panels that feel quite hard to the touch, overall, the high quality materials and solid construction impress and it's this general classiness that makes it all feel special rather than any stand-out detailing. What we think the brand is very good at is deciding what functions should remain as dashboard buttons - like the ventilation and stereo controls - and which ones should be squirreled away into infotainment system menus, in this case an iDrive set-up which is one of the very best of its kind. Rear seat passengers meanwhile, will be grateful for that boxy shape. It's certainly more spacious in the back than a more swoopily-styled rival would be, even if legroom remains in somewhat short supply, despite the fact that it increased by 21mm over the old 1 Series Coupe. Still, adults who aren't too lanky should be able to squeeze themselves in reasonably comfortably with a bit of co-operation from those ahead, provided that the folk in front aren't basketball players and the journey isn't too long. Though only a couple of people can be accommodated, a stowage compartment is provided in between and there's a cockpit-like feel to these two chairs that rather suits the character of the car. Most of the time of course, you'll be using these seats to sling briefcases, jackets or designer shopping bags onto - or indeed folding them down to increase boot space. There's more of this than you might expect too. More in fact than you'd get in a supposedly more practical five-door BMW 1 Series Sports Hatch from this period. In fact, the 390-litre total cargo area capacity is 20-litres up on what the old 1 Series Coupe could offer, which means that even before you start pushing forward the 60:40 split-folding rear bench, you've got more space to play with than you would in an everyday Focus or Golf family hatchback. No other compact coupe competitor can match this and some are way behind: we're talking around 30% more luggage space than you'd get in a Volkswagen Scirocco from this period for example. Plus there are cargo nets to tie your shopping down so you'd don't have to worry about attacking a few of your favourite backroads on the long route back from the supermarket. The 60:40 split-folding rear bench just mentioned is standard but new buyers were offered the optional extra flexibility of a 40:20:40 three-way folding arrangement with a Through-loading facility for long items like skis. In other words, though in choosing this BMW, you'll have bought yourself a coupe, it's not a car without a certain level of practicality.

Our owner survey did reveal many satisfied users of this car but inevitably, there were a few issues reported. Obviously, a fully-stamped service history is vital. Frequent issues include a need to replace the air conditioning condenser and the ABS control module. One owner in our survey reported an Exhaust Valve Flap Actuator squeak. Another left his car parked for a week, then found it wasn't making full power under hard acceleration, at which point he got a drivetrain malfunction saying 'maximum power output not available'. We've heard that early on, the six cylinder petrol engine had timing chain issues which led to blown motors. This was sorted on cars made after 2015, which had a redesigned timing chain. There was a fuel pump issue on early cars too, evidenced by a warning lamp and an error message display in the instrument cluster before the engine cuts out. The fuel pump should have been replaced to sort this. 2 Series models built October 2014 and December 2017 might have EGR Cooler issues too. Cars made between September 2014 and March 2015 might have a faulty Driver's side seatbelt mechanism that makes it difficult to use in cold weather. A possible issue with the power steering affects some cars manufactured between 2014 and December 2015, and you may notice heavier steering than usual if it fails. Faulty airbag modules in some models made between August 2016 and November 2016 may not activate correctly in a collision; new modules will need to be fitted to solve the issue. An issue with the crankshaft sensor was reported on some cars made between May 2018 and June 2018 - which could lead to the engine going into an emergency reduced power mode, limiting performance. Otherwise, it's just the usual things. Look for signs of child interior damage and check the alloys for scratches and scuffs.

If pushed to name BMW's most convincing sporting car from the 21st century's second decade, many would walk past the mighty M5, ignore the powerhouse M3 and M4 models, pause briefly to admire the lines of the Z4 and end up at the baby of the range, this 'F22'-era 2 Series Coupe. With a selection of fantastic engines and the draw of a fully-fledged and awesomely capable M model at the top end, this two-door 2 Series demonstrated once again that light is right. Not for nothing did this model enjoy the lowest average owner age profile of any that the Bavarian brand made in this period. This 2 Series isn't perfect of course. You might suggest that its shape isn't the most alluring we've ever seen from this Munich maker - but at the same time, you'd have to admit it to be a huge aesthetic step forward from the old 1 Series coupe. Anyway, what'll sell this thing to you is its road going experience, its lust for life and the way it'll remind you of what driving used to be about when all that's ahead is a ribbon of twisting tarmac. Ultimately, it's the kind of car that BMW does better than almost anyone. 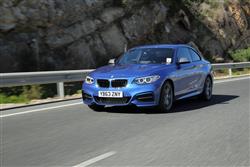 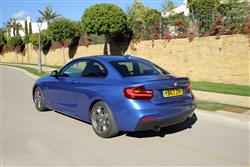 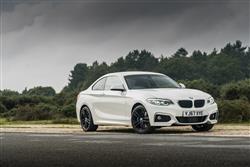 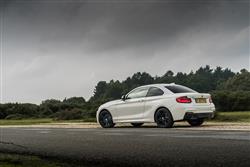 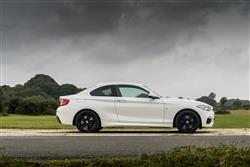 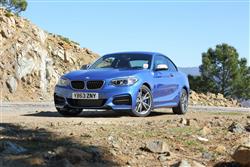