BMW's idea of a compact seven-seat MPV is delivered by this 2 Series Gran Tourer model. June Neary tries it.

You don't think of BMW as being a brand likely to deliver you a family MPV. Today though, the Munich maker leaves no stone un-turned in its efforts to offer complete market coverage so, sure enough, you'll find such a thing in the company's showrooms, this car to be specific, the 2 Series Gran Tourer. I thought I'd put one to the test.

First impressions were that this Gran Tourer is a rather better looking thing than the five-seat 2 Series Active Tourer model it's based upon. All in, it's 214mm longer than the smaller car and actually sits 53mm higher. The longer wheelbase of 2,780mm provides a decent slug of interior space and the elevated roofline affords respectable headroom in the back as well as making the car easier to get in and out of. I was able to fit three child seats in the second row, and, had I had another couple, I could have fitted a further two in the third row. Like all good MPVs, this one features a second row seat that slides fore and aft by 130mm, depending on whether you're prioritising legroom or luggage space. I also like the fact that the backrest reclines a few degrees for greater comfort on longer trips. If maximum stowage space is required, the 40:20:40-split rear seat backrest can be remotely unlocked by pressing a button in the boot, then folded down to create an almost level cargo floor. The front passenger backrest can also be lowered to allow long objects up to 2.6m in length to be transported. That came in handy on a trip to the dump. The tailgate can be opened and closed automatically by push button operation or, optionally, via one of those sensors that has you hopping about waving your foot under the bumper.

Under the skin, this car rides on MINI underpinnings (and uses MINI engines), featuring the very un-BMW-like layout of front wheel drive. It doesn't feel much like a MINI to drive mind you, but then go kart-style handling probably wouldn't be welcomed by typical MPV buyers, particularly those looking for a very plush example of the breed like this car. The powerplants, inevitably, are the same as those used in the normal five-seat 2 Series Active Tourer model, the opener being the 140hp 1.5-litre three-cylinder 218i, which will scuttle to 62mph in 9.5 seconds. Graduate to the 2.0-litre four-cylinder turbo engine in the 220i and you're looking at 192hp, which translates to 62mph disappearing in less than eight seconds. There's a trio of diesels, starting with the 116hp 216d, while the 150hp 218d will be the best seller. At the top of the range is the 220d xDrive version, sending its 190hp to all four wheels. Because of that all-wheel drive grip - not to mention the small matter of 400Nm of torque - it's just as quick to 62mph as the 220i. Power is sent to the front wheels via a six-speed manual gearbox; as an option, BMW offers a six-speed Steptronic transmission for the three-cylinder engines, while the four-cylinder motors can be coupled with an eight-speed Steptronic transmission (standard in the BMW 220d xDrive Gran Tourer). The 10-millimetre-lower M Sport suspension is standard on the M Sport trim and also available as a separate option. As an alternative, drivers can choose a chassis with Dynamic Damper Control: using the Driving Experience Control switch, two different damping settings are available.

Expect to pay around £27,000 for the least expensive 2 Series Gran Tourer model, the 218i, which means that you're having to find a premium of around £2,000 over the five-seat 2 Series Active Tourer model. For a bit of market perspective, I'll tell you that for this kind of money, you'd be paying around £2,000 to £3,000 more than you would be for something mainstream in this class like, say, a Vauxhall Zafira Tourer: that doesn't seem too bad. The range opens in SE trim, which includes Bluetooth, the iDrive operating system with Controller on the centre console, Intelligent Emergency Call, a 6.5-inch colour display and the Driving Experience Control switch with ECO PRO mode. In addition, every BMW 2 Series Gran Tourer also comes with a rain sensor with automatic headlight activation, as well as the 'Collision Warning with City Braking' function. Two-zone automatic air conditioning, rear Park Distance Control, front fog lamps and a multi-function steering wheel are also standard fit items. From 'SE', you can step up to 'Sport', which brings 17-inch alloys, sports seats and bodywork detailing in high-gloss black. The 'Luxury' model includes chrome trim, interior wood trim insets and leather upholstery, while the 'M Sport' model gets body styling, high gloss Shadow Line trim, sports seats in leather, an M leather multifunction steering wheel and 18-inch M alloy rims.

I ended up asking myself that question. What would I rather have, I mused, were I to be in the market for a compact seven-seat MPV? Would it be better to have a well-equipped version of something mainstream? Or might it be better to compromise a little on spec, but get myself the quality and kudos of owning this BMW. I have to say the snob in me triumphed in the end, justifying a preference for this Gran Tourer model with thoughts of efficient running costs and higher residuals. Try one and you might well end up feeling the same. 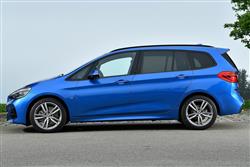 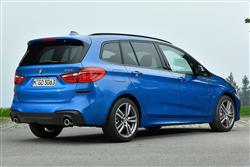 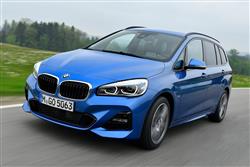 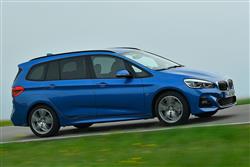 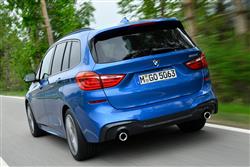 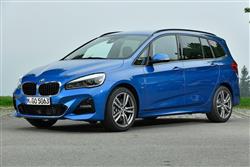