Once merely a bigger 3 Series sports saloon, BMW's Five Series has in more recent times become more of a shortened 7 series luxury limo. That was obvious when it came to the sixth generation version, though with the right spec, this model could still be a good driver's choice in the full sized executive class. Here, we're evaluating the post-2013 facelifted MK6 version of this car as a used buy, a model which brought buyers more engine options, higher-tech equipment, greater efficiency and a subtle restyle. There's very little not to like.

For well over four decades, the question facing customers in the segment for full-sized executive cars has less been why they should choose a BMW 5 Series but why they shouldn't. This was the car that ruled its marketplace, the business buyer's 'ultimate driving machine'. It's dangerous to meddle with such an enduring success story, but the Bavarians did just that in 2010 with the launch of the sixth generation 'F10' version. Faced with stronger competition from the Audi A6, the Mercedes E-Class and the Jaguar XF, BMW decided that this car needed wider appeal, an approach requiring a few changes to the way it was presented. A 5 Series could still be a dominant driving machine - but with this MK6 model, you had to specify lots of costly extras to make it so. And it could still be a class leader for running costs - but you had to pay extra for a green-focused 'EfficientDynamics' version to achieve it. Those not prioritising these things could save their money - or spend it on less sensible attributes. You might have expected these changes to frustrate the 5 Series faithful but the sales figures didn't reflect that. Indeed, this model quickly became the most successful car of its kind that BMW had ever made, racking up over a million sales in its first three years on sale. By 2013 though, rivals had upped their game, so to keep the MK6 model 5 Series sales momentum going, it was necessary for the Bavarian brand to do the same. Hence the need for this revised model with its extra engine options, additional equipment and subtle restyle. Hardly the most far-reaching package of changes - but then you don't dramatically update a winning formula, then do so once again after just a few years on sale. No, you create a car, well, much like this one. It sold until the all-new seventh generation 5 Series model was announced, late in 2016.

This shape of the 'F10' sixth generation 5 Series, with its short overhangs, heavily contoured bonnet and strong side creases, caused a lot less controversy than that of its angular pre-2010 predecessor. Apparently, this model was styled to match its weight distribution, the bonnet, front wings and doors being fashioned from aluminium to help maintain the 50:50 weight distribution over the axles that the Bavarians feel is so important. Here, we're looking at the facelifted MK6 model launched in 2013. BMW rarely makes radical mid-life changes to its mainstream models - and didn't do so here. As part of the updates, all models got either xenon headlights or extra cost Adaptive LED lamps. There were additional contour lines around the trademark BMW kidney grille and a restricted lower air intake, plus the indicator repeaters were moved into the door mirrors. Moving further back, the revised tail lights got slender, elegant LED strips and there was an additional crease in the rear apron supposed to emphasise the car's width and sporting stance. One of the major changes made to the sixth generation 5 Series when it was originally launched was the increase in size over its predecessor. This was brought about by an 80mm increase in its wheelbase and the installation of a platform originally developed for much bigger models like the large 7 Series luxury saloon and the huge 5-door 5 Series Gran Turismo. That gave this car a slight advantage over its rivals, something you most keenly feel when sat in the back. If your only experience of 5 Series motoring dates back to the old pre-2010 'E60' MK5 model, then you'll find that this car is far more spacious with significantly more leg and shoulder-room. Indeed, were it not for the prominent central transmission tunnel, you'd probably have reasonably comfortable long distance room for three adults. At the wheel, the changes made to this revised post-2013 MK6 5 Series model were even more subtle than those made outside. Owners of the original version of this design might notice chromed strips bordering the central Control Display, while those who specified the optional Professional Media Package infotainment system got a larger rotary iDrive controller with a touchpad that allowed occupants to 'write' addresses with their fingertips. That was about it - but then few changes were needed. Even today, the sweeping dash still looks modern and the sensible layout means that you'll quickly feel at home. And the iDrive infotainment system, once hopelessly clunky and complex to use, is clever and intuitive. As is the big, clear typically BMW instrument display that on an M Sport model, you view through a lovely grippy three-spoke leather-trimmed wheel. Next to the shard-like gearlever, you'll find the buttons to operate the Drive Performance Control system which enables you to adapt the behaviour of the car to the mood you're in and the road you're on. As you flick between the various modes, the digital display on the large screen that dominates the top centre part of the dash graphically changes to suit. It's all very slick. And luggage space? Well, you can get to it a little more easily on post-2013 MK6 models fitted with the 'Comfort Access' option which, if the key is in your pocket, enables you to open the bootlid by merely waving your foot beneath the bumper. A great boon if you're approaching the car laden down with bags or boxes. Once revealed, the 520-litre cargo area of the saloon variant is actually a touch smaller than obvious rivals - all that extra wheelbase space went to benefit folk in the rear. Still, we're only talking 10 or 20-litres less than a rival A6 or an E-Class, which won't be a large enough margin to matter very much to many potential buyers. More of an issue is that BMW, like Mercedes, insisted on charging extra for the folding rear backrests that really help if you've got exceptionally bulky loads to carry. That means some cars you'll come across won't have this feature. If you're likely to be needing it on a regular basis of course, you're more likely to be considering the Touring estate 5 Series variant where the 560-litre boot (already large enough for a washing machine) can be extended to 1,670-litres. Or perhaps the Gran Turismo five-door hatch where the respective figures are 440 and 1,700-litres.

Most of the 5 Series drivers owning models from the 2013 to 2016 era seemed to be pretty happy with their cars on the evidence of our survey. However, inevitably, there were issues. One owner found his engine jerking at 40-50mph, this issue traced to a computer fault. Another reported steering wheel rattles, while yet another said the steering wheel squeaked, this latter problem traced to a slip ring that needed replacing. There were some issues with the sunroof assembly too. One owner found that it came apart on his car: another said the whole area just rattled. Look for that on your test drive. One owner found that the driver's electric window went down every time he switched the engine on, while another said the radio kept turning itself on for no reason. On that subject, the useful mobile data element of the iDrive system was only provided to owners from new for the first three years of ownership and many didn't pay the money to renew it: find out from the seller if this has been done. One owner found that the cruise control kept switching on by itself. And there were issues reported with worn alternator bushes and a faulty screen washer pump. On owner complained about the lack of an oil dipstick on the car, which does seem to be an omission. Apparently, dealers say you just wait for the low oil light to illuminate on the dashboard, then chuck a litre of oil in. There are also issues with the surfaces of the alloy wheels pitting: check the rims carefully on the car you're looking at.

Despite its enormous success over nearly half a century, BMW's 5 Series remains a car that's often underestimated. That's a little unfair, for if properly specified, this revised MK6 model can not only be the most efficient contender in its class from its era but also the best one to drive, a combination that takes some beating. Bear in mind that in developing this car, BMW's design team had not only to manage that but had also to cover off the build integrity segment buyers expected from an Audi and the gadgetry and ride quality such people would want from a Mercedes-Benz. An enormous task. But not an impossible one, as this improved F10 generation 5 Series proved. True, it's a pity that in buying this model, if you're to really get yourself 'the ultimate driving machine', you've to find an example optioned up with pricey dynamic driving options. But even in standard guise, this is a hugely accomplished car, if one requiring familiarity and plenty of mileage over varying roads before its true qualities really begin to shine through. As you'd expect, it's quiet and roomy and in this post-2013 guise, it's also smarter, cleaner and even better on the balance sheet. A benchmark business BMW then. Just as a 5 Series has always been. 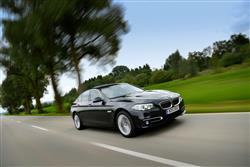 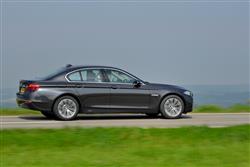 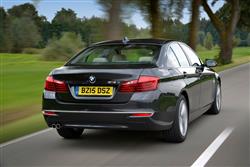 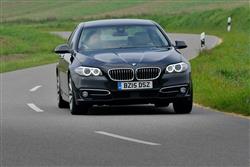