BMW's fifth generation 'F80'-series M3 came solely in four-door form and featured turbo power for the first time. Under the bonnet, there was a smaller straight-six 3.0-litre engine with greater power for track heroics you'd never think could so effectively be combined with the more mature manners of a sensible sports saloon. For the right kind of buyer, it's quite a car.

BMW's M3. It's a name that evokes a rich history of competition, tyre smoke and unremitting motorsport development over more than three decades and four generations of the Munich maker's practical, power-packed performance car. In 2014, the Munich maker brought us this MK5 'F80'-series model. You'll probably remember older versions of this car as coupes, a body shape BMW's M division was still making by 2014 but by then had decided to designate the 'M4'. The more familiar 'M3' badge continued on though for four-door folk and whatever body style was chosen, the engineering was basically the same - and very different from what went before. Out went the previous fourth generation version's thirsty high-revving 4.0-litre V8 and in its place, we were presented with the first turbo engine ever offered in this model line - a twin turbo unit in fact, potent enough to overcome this powerplant's smaller six cylinder 3.0-litre size and boost power by 11bhp and torque by an astonishing 35%. The 'six into 3' formula was actually a very familiar one for long time fans of this car. Both the second generation 'E36' model of 1992 and the MK3 'E46' design of 2000 both also used straight six engines, though normally aspirated ones. But if you had pictures of one of those on your bedroom wall, you'll perhaps come to this modern version with the wrong kind of expectation. Here, the M3 evolved from hairy-chested racer to cultured street supercar. It was a matured, though still magnificent prospect. A light facelift in 2016 brought ther option of a 'Competition' version, with total output boosted from 425 to 450hp - and that was the only variant offered by the time the production run finished in 2020. A track-style CS model sold between 2017-2019.

Is this how buyers will want their M-car to look? Probably. This 'F80' M3 sits 47mm higher off the ground than its M4 coupe stablemate but it's a difference you'd never appreciate from a casual glance. Instead, your first impressions are of a rather menacing thing, with real width to the design, especially when you view it from the front and take in the differences over an ordinary M Sport-trimmed 3 Series saloon: the wider flared wheel arches, the characteristic powerdome on the classic long bonnet and the way the deep front spoiler with its trio of air intakes sits purposefully beneath the trademark double-slat kidney grille. The unique aerodynamically-optimised twin-stalk side mirrors with their translucent LED indicators are bespoke too. It's just as good inside too, where you're greeted by an intuitively-designed cockpit, the centrepiece of which is the M leather steering wheel with its MDrive buttons for personalised vehicle set-up. On M Double Clutch Transmission models, you also get gearshift paddles with a cool metal finish. Through the stitched wheel, you glimpse a purposeful set of Motorsport-derived dials, with a segment beneath the rev counter showing the various suspension, throttle and steering set-up options you've chosen. We think the deep-set leather-trimmed heated, electrically-adjustable M seats are our favourite interior touch though, with their contoured sides, integrated headrests and pronounced raised elements.

Our owner survey did reveal many satisfied users of this car but inevitably, there were a few issues reported. Obviously, a fully-stamped service history is vital. This car uses a complex 'S55'-series engine and only regular and appropriate maintenance will see it go the distance. Common problems with this unit include issues with the valve cover and valve cover gasket leaks, oil pan gasket leaks and oil filter housing gasket leaks. Early on in the production run, various crank hub issues were also reported. The crank hub holds the engine's crankshaft and timing gear together and in the case of the 'S55' engine, a single bolt was expected to do the job. Occasionally (it's estimated at one in every 200 cars) that bolt was prone to break. A new bedplate brought in by BMW was said to have fixed the problem on 2016-on cars but you need to be aware of it on earlier 'F80'-series M3s. Otherwise, it's just the usual things. Look for signs of child interior damage and check the alloys for scratches and scuffs.

So, what's this 'F80' M3 really like? Like no other 3 Series saloon, that's for sure. You realise this as soon as you hit the start button of this fifth generation model and the twin turbo straight six engine fires up with a throaty roar. The noise may not be quite as emotive as the revvy V8 used in this car's direct 'E90'-series predecessor but it'll still alert the neighbours to the fact that something rather special is sitting on your driveway. With a big normally aspirated engine fitted up-front, the previous generation version of this model required selection of a lower gear for instant acceleration below 4,000rpm, so you constantly had to keep the engine spinning, which was fun if you were in the mood but a little tiring if you weren't. Thanks to 550Nm of pulling power, that's not necessary here: plant your foot in almost any gear and it goes. Very fast, 50 to 75mph in 4th occupying just 3.5s in the manual model and 4.2s in the auto version. True, there isn't the razor-sharp throttle response you only get from normally aspirated induction - and you might rather miss that. But turbo lag is slight and, once the blowers have spooled up, they're your passport to absolutely ridiculous speed. Most 'F80' M3s were sold with the M DCT twin clutch auto, though unlike Mercedes and Audi models in this segment from this period, BMW did still give buyers a manual stick shift option. Overall, there's no doubt that this M3 remains the proper driver's tool its predecessors always were. It's not as light and chuckable as those earlier M-cars: weighing in at 1,500kgs, it could never be. But then BMW made an M235i model in this period you should try if that's more the kind of thing you're seeking. Or perhaps the rare M3 CS track variant, sold between 2017-2019. In standard form though, the M3 in this 'F80' form moved on - but kept the spirit of the original.

In MK6 'F80' form, BMW's M3 proved to be different from previous versions. Of course it had to be. By 2014, the Munich maker had smaller, more agile motorsport-tuned models like the M235i for those merely seeking tarmac-tearing thrills. So his MK5 M3 had to evolve into something a little more grown-up without losing the raw dynamic excitement that's always characterised this iconic badge. Tough to achieve at the same time as meeting demands for weighty safety legislation and eco-minded engineering. But not impossible - as this fifth generation model proved. Yes, it was lighter, much more economic and better able to pretend to be nothing more than a luxury sports saloon for those not in the mood for motorsports magic. But, thank goodness, it also still knows how to entertain. With the right buttons pressed and the right electronics de-selected, it's still a car you have to master, where yours are the risks but yours too the rewards. In spite of everything, we still had here an M-car fit to continue this famous bloodline. Thank goodness. 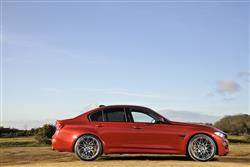 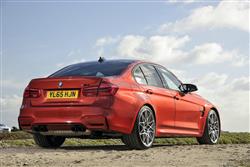 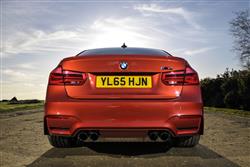 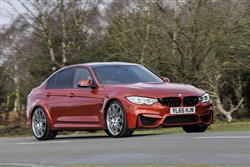 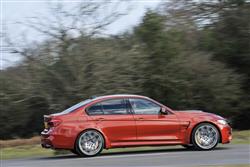 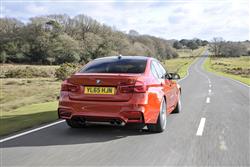