BMW's X7 classily meets the needs of wealthy buyers wanting a super-luxury large SUV and needing to seat up to seven adults. It's essentially a super-sized X5, but it makes far more of a pavement statement and inside, feels very high-end indeed, especially in this updated form. If you don't much care what the neighbours think - or perhaps even if you do - then you'd probably quite like one.

Not every new car these days is designed with a specific eye on European buyers. Take this one, the BMW X7, first launched in 2018, an enormous luxury seven-seat SUV primarily aimed at customers in America, the Middle East, China and various Asian markets. But BMW continues to think better-heeled buyers with larger families here might like one too. Here, seven adults can fit comfortably into a car that BMW hopes will make a really big statement. Especially in this improved form.

The brand wants you to think of this as a 7 Series that could go off road, rather than a larger X5. But it does share most with that SUV, including all its engines - there are three, all of which are in some way new and all of which now feature the brand's latest 48V mild hybrid tech. Most will probably still select the diesel option, now represented by a more powerful 340hp xDrive40d model, which uses an uprated version of BMW's familiar six cylinder 3.0-litre diesel. This will be great for towing with its 720Nm torque output - and makes 62mph in 6.1s. Diesel-haters will opt instead for the xDrive40i variant, which now has a 380hp version of the brand's in-line six cylinder petrol unit. With that, the figures are 540Nm and 5.8s. At the top of the range lies the M60i xDrive, which has a 4.4-litre petrol V8 with 530hp, capable of 62mph from rest in just 4.7s: for very fast families indeed. As before, all units use an 8-speed auto gearbox, but this Steptronic unit's been upgraded with Launch Control and a Sprint function, respectively allowing for faster starts and quicker overtakes. As previously, all models feature adaptive two-axle air suspension. What else? Well the electric power steering system's been re-tuned for extra feel. And on the top M60i variant, there's an 'Executive Drive Pro' option, which gives you active roll stabilisation, restricting body roll at speed through the bends. Tarmac is of course this SUV's preferred habitat where it rides with suppleness in 'Comfort' mode and handles with actually quite a lot of verve if you set the 'Drive Performance Controller' to 'Sport'. The commanding driving position helps and it's necessary because otherwise, this car's sheer bulk might easily feel intimidating on narrower roads.

If you know the X7, you'll notice the update changes made here, highlighted by the addition of distinctive split headlamp units, with updated matrix LED headlights. They flank a new 'Iconic Glow' kidney grille, which features cascade lighting for the two grille elements. There are three-dimensionally-sculpted rear LED lights. And you can now have wheels as large as 23-inches in size - a first for BMW. Otherwise, the exterior look is as before - which means that it's big, similar in size to the Range Rover and Mercedes GLS models that potential customers will also be considering. This BMW is 5.15m long and 1.81m high - compare that to an X5, which is 4.92m long and 1.75m high. There's a full 2-metres of width too. Like the X5, the X7 rolls down the production lines of BMW's US Spartanburg plant. Inside, the key change with this updated model is the addition of BMW's latest 'Curved Display', made up of a 12.3-inch information display behind the steering wheel and a central 14.9-inch infotainment monitor. The two screens merge into one fully digital and high-resolution display unit behind a single glass surface. Also new is a smart crystalline ambient lighting bar below the trim strip ahead of the front passenger. As before, you sit high, the rear window seems a long way off and there's a huge part-opening glass roof to flood the cabin with light. There's obviously plenty of middle row space (the centre row slides fore and aft) and even those consigned to the third row seats won't feel too short-changed, though getting to them past the forward edge of the rear wheel arch can be challenging. The standard boot capacity is 326-litres. Drop the two rear seating rows and 2,120-litres of carriage space is freed up. A button in the luggage compartment activates a loading mode that lowers the car by 40mm.

Prices now start at around £83,000 for the base xDrive40d diesel variant with 340hp. A fraction less gets you the 380hp petrol-powered xDrive40i. You'll need to find over £108,000 if you want the V8 530hp M60i flagship model. All variants get seven seats, 8-speed Steptronic auto transmission, xDrive all-wheel drive, air suspension and an electrically-operated panoramic glass roof. An 'M Sport Package Pro' package is optionally available on 'M Sport' models or standard on the BMW X7 M60i xDrive. It comprises extended M Shadow Line trim, which also adds a matt Black surround for the kidney grille and tailpipe finishers in Black Chrome, plus M Sport brakes with black brake callipers bearing the M logo and seat belts with contrast stitching in the BMW M GmbH colours. When specified with this package, the six-cylinder models are also fitted with an uprated M Sport exhaust system. Many owners will want to upgrade the car's glass roof to 'Sky Lounge panoramic' status, which gets you a roof with 15,000 graphic patterns able to generate a display reminiscent of a starlit sky. There's also an optional 'Comfort Plus pack' which further increases the feeling of wellbeing. Like the front seats, the seats in the second and third rows can also be heated, as are the steering wheel and the armrests for the driver and front passenger in the doors and centre console. The "thermo" function for the cup holders in the centre console keeps drinks containers cool or warm as required.

Electrification in the form of 48V mild hybrid technology gives all engines in this enhanced X7 increases efficiency. With this, an electric motor is installed in the transmission's compact housing. The mild hybrid system generates torque of 20Nm and an output boost of up to 12hp, depending on the driving situation. In the xDrive40i, the mild hybrid system is also used to provide purely electric driving at very low speeds. The energy required for the electric power boost is stored in a 48V battery located in the engine bay. It is charged via recuperation in overrun and braking phases. Besides supplying the electric motor, the 48V battery also feeds the regenerated brake energy to the vehicle's electrical system. So what about the figures? Well the result of all this in the xDrive40i petrol model is a combined cycle fuel figure of up to 30.7mpg and a CO2 reading of up to 210g/km. For the V8 M60i xDrive, the readings are up to 23.2mpg and 278g/km. If you've heard talk that diesel engines are planet-polluting brutes, then shelve that for a moment while you examine the black pump-fuelled powerplant on offer here because it's nothing like that. The xDrive40d manages up to 37.2mpg on the combined cycle and up to 200g/km of CO2. What else might you need to know? Well, routine maintenance is dictated by 'Condition Based Servicing' that monitors oil level and engine wear, taking into account how long it's been and how far the car has travelled since its previous garage visit. You can check all of this using menus in the 'iDrive' centre-dash display and the car will give you four weeks' notice of when a check-up is needed so you have plenty of time to book it. To help plan ahead for the cost of regular work, at point of purchase you'll be offered a 'BMW Service Inclusive' package that lasts for three years and 36,000 miles.

Really exotic super-luxury SUVs like the Lamborghini Urus, the Rolls Royce Cullinan and the Mercedes-Maybach GLS are all very well, but they only actually seat five people. If you want to seat seven with ultimate SUV luxury and you want something a bit nicer than, say, an Audi Q7 or a Volvo XC90, your only options are a Range Rover or a Bentley Bentayga - or if you can't quite stretch to those two, a Mercedes GLS or this BMW X7. Thanks to these updates, this Bavarian contender now looks more appealing in this exalted company. There'll still be plenty of people who'll say that this car is too big for our market. They said that about the Mercedes GLS when it was launched and were proved wrong: they have been again here. Bavaria's most imposing piece of automotive real estate will continue to have a distinctive appeal if you like the brand's cool sporting vibe, have a large family and want the very best. Size matters. But then you always knew that didn't you. 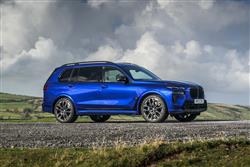 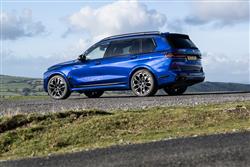 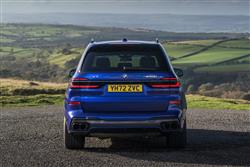 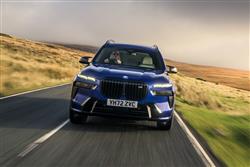 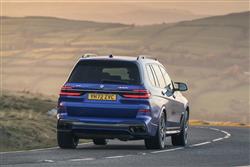 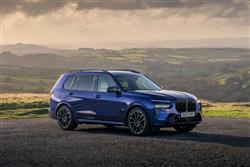