BMW's original Z4 had a lot going for it. The styling still looks good today whether you chose the soft top or the coupe, it was well built, drove well and wasn't priced exorbitantly. Perhaps BMW rested on their laurels a little too long with that car though, because before the Bavarian company knew it, Mercedes, Audi and Porsche were all forging ahead with designs that suddenly put the Z4 quite a long way down many buyers' shortlists. The solution was an all-new car that was launched without great fanfare but which was nevertheless a huge step forward. It's hard to believe that car appeared back in 2009, but it did and now used examples are available at reasonable prices. Here's what to look out for.

BMW reprised its launch tactic of the original Z4 when the second generation car was launched back in summer 2009. Go with the powerful models first to create the requisite aspirational image and then flesh the range out with more proletarian variants for those who had previously been unable to countenance the prior price of ownership. It's pretty much the reverse strategy of the Z3 roadster, where the first cars shipped were puny 1.9-litre cars and where the model was fixed in people's minds as a glitzy Mazda MX-5 rival. Not so this Z4. It was pure Mercedes SLK/Porsche Boxster competition and when it arrived it shocked many. Yes, the styling theme was evolutionary, with clear Z4 design cues carrying over and it would be fair to assume that this was just a facelift car with a folding hard top roof, but the changes ran so much deeper. It was a markedly bigger car; 148mm longer at 4,239mm and 9mm wider at 1,790mm, and this results in greater interior space and luggage capacity. With the roof up, headroom was increased by 44mm while you also got 20mm more shoulder room and 43mm more elbow room. The launch line up consisted of 2.5-litre 204PS Z4 sDrive23i, with the 258PS Z4 sDrive30i acting as the centrepiece while the 306PS Z4 sDrive35i acted as the flagship model. An even more powerful 340PS Z4 sDrive35is model appeared at the start of 2010 to complete an all six-cylinder engined range. This didn't last too long, as at the end of 2011 the powertrain line-up was revamped to incorporate an all-aluminium 2.0 litre four-cylinder unit, also toting BMW's twin-turbo technology. The new motor debuted in two new models, the sDrive20i and the sDrive28i, which replaced the 204bhp SDrive23i and the 258bhp sDrive30i six-cylinder cars. A facelifted model appeared in Spring 2013.

For a metal-roof roadster, the Z4 is remarkably handsome with its folding top in place. There are no awkward looks, no tell-tale bulky rear end. Of course, clever as BMW's designers are, they're not miracle workers. The solid roof made the second generation Z4 185kg heavier than its fabric-topped predecessor and meant a reduction in boot space (to just 180-litres with the roof down). Still, it's no worse than its arch-rival, Mercedes' SLK in this respect and the Z4 has the advantage of being able to boost its 310-litre roof-up capacity via an optional ski-flap in the boot. Thus equipped, you could carry either a couple of sets of skis or, more ambitiously, a couple of sets of golf clubs. Annoyingly, original buyers had to pay over £500 extra for the 'Comfort Access' option which enables you to raise this folded roof sandwich slightly to get hold of bulky stuff you put in the boot when the roof was up but which otherwise becomes trapped there when the roof is down. Buyers not wanting to pay the extra worked round this problem by using the 15.5-litre interior storage area behind the seats. Otherwise, irritations are notable by their absence, unless you count the fact that the folding roof, which electro-hydraulically raises or lowers in just 20 seconds, can only be used when stationary. As you'd expect for the premium money being asked, everything is beautifully built from the highest quality materials. Plus the extra head, shoulder and elbow room that have been built into this MK2 Z4 model give it a far airier cabin feel than rival Audi TT or Mercedes SLK competitors.

Like all modern BMWs, rather than specifying preselected service intervals, the car's on-board diagnostics indicate when a service is due. It's therefore important to discover when the last service took place and ask to see documentary evidence of this. Make sure the folding hard top mechanism functions exactly as it should and don't be afraid to be utterly pedantic when running through all of the electrical functions. Check the alloy wheels for kerbing damage and make sure the alarm and immobiliser system are functioning properly. Some owners will have specified their Z4s to the nines from BMW's options list and will want to claw back what they've spent. Don't entertain any of it.

The Z4's long, swooping bonnet suggests six cylinders and, not wishing to disappoint, BMW provided four such engines to choose from: the 204bhp 2.5, the 258bhp 3.0-litre or the 306bhp and 340bhp twin-turbo 3.0-litre units. For sonic gratification - not to mention sheer shove in the case of the twin-turbo units - the six-pot Z4s have always sounded and felt suitably racy. A subsequent round of revisions saw the powertrain line-up updated to add an all-aluminium 2.0 litre four-cylinder unit, also toting BMW's twin-turbo technology. This motor debuted in two models, the sDrive20i and the sDrive28i, which replaced the 204bhp SDrive23i and the 258bhp sDrive30i six-cylinder models. In the sDrive20i, the engine produces 184bhp and in the sDrive28i 245bhp, with in both cases, economy and emissions being significantly improved. The engine design features twin-scroll turbocharger technology, high-precision direct fuel injection, VALVETRONIC variable valve control and double-VANOS camshaft control previously only seen in six-cylinder BMWs. Unlike the 3 Series Convertible, the first car BMW made with a metal folding roof, this Z4 managed to retain the German brand's famed 50:50 weight distribution with the roof up but ironically, it's with the roof down and the extra weight over the rear wheels that it feels most responsive. There's virtually no body lean and in the dry at least, you rarely run out of grip. Most original owners chose to pay around a thousand extra for the Adaptive M Sport Suspension which enables you to adjust the dampers depending on the driving conditions. Most of the time, you'll only use two settings - 'Normal' and the stiffer 'Sport' - but there is also a 'Sport+' setting which lowers the car by 10mm, firming things up still further for racetrack use and offering 10% more driver leeway before the stability control cuts in. All Z4s come with BMW's Drive Dynamic Control system. Here, you can set your car up to your own preferences, just like a race team would on a racing car. That means altering the response of throttle, steering, stability control and even the gearchange times if you've opted for the six-speed (or optional 8-speed) auto that's available on the 20i and 28i models or the full-blown 7-speed twin-clutch transmission offered on the 35i variant and standard on the 35is. It all works brilliantly, though the steering can still feel a little lifeless, no matter how you tweak it. This car had to replace coupe as well as roadster versions of the MK1 Z4, so roof up, refinement had to be peerless: it is. Roof-down of course, it's very different but many will see the blustery feel as part of the fun of owning a car of this kind.

It's not too often that BMW builds a sporting car that is surprisingly good. We come to expect a certain level of excellence from the Bavarian company but it's fair to say that the second generation Z4 exceeded expectations. In fact it's also true that customer perception lagged a long way behind the production reality and only now is this car beginning to be recognised for what it is and that's a rival to the Porsche Boxster and/or Cayman that might just be a better all-round road car than either of them. The result is that used prices are very firm, so bargains are hard to come by. The best car in the range, the sDrive 28i, is almost impossible to pick up as a used buy, so we'd recommend an early sDrive30i if you're chasing value. Whichever model you look for, it's hard to go wrong. 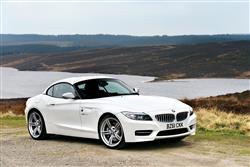