Skip to main content
Get an extra £500 when you part-exchange.
Plus enjoy a 2-year service plan when you buy a used car.
20 images

The classical Roadster. This, apparently, is what we have here in the form of the third generation version of BMW's Z4. Jonathan Crouch drives the four cylinder 20i version.

BMW knows a thing or two about roadsters and this third generation Z4 is one of its best. It may not be the sharpest car in its class to drive but on the right day, in the right mood on the right road, you may not care. The engines are efficient and willing, the looks are stunning and the feeling you get behind the wheel still makes you feel twenty years younger. This, it seems, is a Z that might be very hard to catch. Let's try the base four cylinder 20i version.

Ah yes, the Z4; the model that some said wasn't quite a true BMW sports car in its previous pre-2018-era 'E89'-series form. The head of the company's performance 'M' division didn't think that old MK2 model was quite dynamic enough to get a full 'M' status. Some say it isn't quite a true BMW sports car in this MK3 'G29'-series guise either, but usually for a different reason - the fact that it's shared its development with a Toyota (the GR Supra). We might also mention the fact that it isn't even built by BMW, the Munich maker having farmed production out to Magna Steyr in Austria. Lots of issues then. Affordable modern-era BMW roadster models have always faced them. This time though, with this 'G29'-series model, there are grounds for believing that this Z4 could actually give us the really serious driver's experience its predecessors struggled to deliver. It's grippier, has a lower centre of gravity, a considerably wider track and, because the MK2 model's heavy old metal folding roof has been dispensed with, there's also the promise of perfect 50:50 weight distribution. Let's put this MK3 model Z4 to the test in base four cylinder 20i form.

Sporting BMWs may have been inseparably associated with six cylinder engines down the years but the key powerplant on offer in this 'G29'-series Z4 line-up squirts fuel into the quartet of cylinders boasted by a TwinPower Turbo 2.0-litre unit that's now only offered in one state of tune. It's the 197hp 20i M Sport variant that I tried - the alternative 258hp 30i version is no longer offered. Like the top six cylinder Z4 M40i, the 20i comes only with an 8-speed Steptronic Sport auto gearbox with gearshift paddles. Rest to 62mph in the '20i' takes 6.6s en route to 149mph. You're probably going to want to pay extra for adaptive damping. The way the suspension interacts with the steering, the throttle and the differential is key to the way this car responds dynamically, so proactive use of the provided drive modes is crucial if you're pressing on. Do that and you'll find that this car lacks the razor-sharp steering responses of a rival Porsche 718 Boxster but the helm is quick and accurate, which in combination with superb front-end traction means that corners can be attacked with surprising confidence. Which is the kind of driving experience you'd want a proper roadster to be able to deliver. Is this one 'fun'? Well it can be - and that's a big step forward in Z4 development.

Brand loyalists will immediately recognise this as a BMW Z car - and it's not just down to the classic long-bonnet / short-roof format and the famous kidney badge on the grille. It's a shape certainly more arresting in reality than on the printed page, but one that you can't help feeling has been developed around its shared platform rather than with free-flowing stylistic expression. We should talk about the fabric roof, since that's a major change over the previous 'G89'-series Z4 with its metal folding top. It folds or erects in just ten seconds - the previous model's rather awkward display of metallic origami took almost twice as long to complete - and can be operated when travelling at speeds of up to 31mph. Inside, you get the nicest and classiest interior you'll find in any small roadster on sale; if anything, it's almost too sophisticated for what's supposed to be a back-to-basics sports car. Most of the fixtures and fittings are lifted from BMW's luxury saloons, including the 10.25-inch centre-dash and instrument binnacle screens that make up the Bavarian brand's sophisticated 'Live Cockpit Professional' package. Apart from that, what strikes you most is the roominess of this cabin, which is one of the things that makes this car feel so everyday-usable. Out back, there's a decently-sized 281-litre boot.

Take a long deep breath before looking at the asking price, which starts at around £42,500 for this four cylinder Z4 20i M Sport. Still, that figure does now include more equipment, notably with the 20i version the uprated 'M Sport' trim level you'd probably have wanted to stretch to anyway. that brings a smarter look and standard M Sport suspension. Plus 18-inch M light-alloy wheels in a double-spoke design (with 19-inch rims optional); and, inside, Vernasca leather upholstery, which can be specified in Black, Ivory White, Cognac or Magma Red. There are three new exterior metallic colour choices - 'Thundernight', 'Portimao Blue' and 'Skyscraper Grey'. And the fabric soft-top will continue to be offered in Anthracite Silver effect as an alternative to the standard black. New to the options list is the 'M lights Shadow Line' styling pack, which can be ordered in conjunction with optional Adaptive LED Headlights. The headlights' dark inserts help imbue the front end of the car with a discreetly sporting aura. And they form a neatly judged composition with the car's 'M high-gloss Shadowline exterior trim' which has extended elements. A host of state-of-the-art driver assistance systems come included: Front Collision Warning with brake intervention, Lane Departure Warning including lane return, and the Speed Limit Info function with no-overtaking indicator. Among the drive assist items on the options list are the Active Cruise Control with Stop&Go function, Lane Change Warning, rear collision warning, crossing traffic warning, the Parking Assistant and the Reversing Assist Camera. Also available is the BMW Head-Up Display, which projects driving information onto the windscreen.

Let's get to the stats. You're looking at up to 40.9mpg and up to 157g/km of CO2. This very creditable reading actually compares extremely well to the rival Audi TT Roadster, though the fairly small plastic fuel tank's relatively small size - 52-litres - rather disguises the fact. In theory, a touring range of up to around 500 miles is possible. Various 'EfficientDynamics' technologies are used to keep running costs in check. There's an engine 'Auto Start-Stop' system, as you would expect. And at highway speeds, the cruise control can seamlessly de-couple the engine from the transmission to reduce friction and consequently save fuel. Of course the driver will also need to do his or her part. The figures we've just quoted assume that the car is being run in the 'Drive Performance Control' system's most frugal 'ECO PRO' mode. In this setting, the air conditioning and power steering only work when required to save energy. Optimised aerodynamics obviously make a significant difference to economy too. BMW has developed what it calls 'Air Breathers' and 'Air Curtains', these devices respectively located behind and ahead of the front wheel arches, their purpose being to reduce turbulence - and therefore drag - in the area around the front wheels.

So what's been delivered here? A Porsche Boxster-beater? Not really. That might be what the magazines wanted but I'm not sure that likely owners are that bothered by such a comparison. This isn't the uncompromised driver's machine that its Porsche rival can be, but it gets close enough to that benchmark for many likely owners to start prioritising the lower pricing, nicer cabin and stronger standards of safety that you get with this Munich model. BMW has been building roadsters for over 80 years - and it shows with this third generation design, a car that's matured extremely well, slowly and methodically developing into an all-rounder that's tough to beat. It's annoying though, that you have to spend so much more to get the Adaptive M suspension we think this car really needs for the completion of its ride and handling package. What it all means is that though the Z4 might not be the first car you look at when choosing a sports roadster, look at it you must. It's now just too good not to. 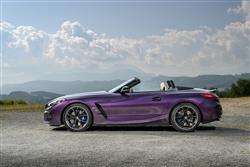 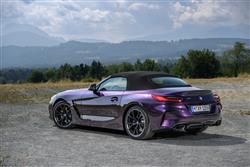 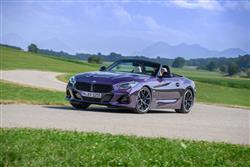 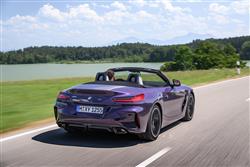 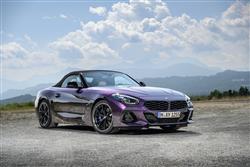 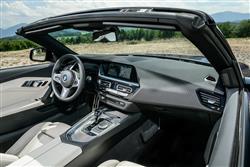