Although it didn't seem likely when smaller MPVs first started being offered for sale in the UK, this genre of car has become a bit of a hot spot for really clever car design. Whereas it was once the preserve of the cash-strapped family man who couldn't afford anything bigger, the mini-MPV has slowly morphed into a product with genuine inbuilt desirability. Few cars illustrate this point more lucidly than Citroen's C3 Picasso. A delightfully styled five-seater with no shortage of smart features, the C3 Picasso has been a deserved hit for Citroen. Here's how to track down a decent used example.

It's fair to say the C3 Picasso had some big boots to fill. Citroen's previous offering in this class, the Xsara Picasso sold in absolutely massive numbers, buyers drawn to its strong equipment provision, decent safety record, economical engines and low, low asking price. Replacing it was never going to be easy so Citroen made the transition with two different cars, the slightly smaller C3 Picasso and the slightly larger C4 Picasso. The C3 Picasso debuted in UK dealers in April 2009, having already been given the big build up by overwhelmingly favourable press reviews. Sales were instantly healthy, with engine choices comprising a 95bhp 1.4-litre and 120bhp 1.6-litre petrol unit and a 1.6-litre HDi diesel engine in either 90 or 110bhp guises. Trim levels ran through VT, VTR+ and range-topping Exclusive. In November 2010 a limited edition Blackcherry model was slotted into the line up. Based on the VTR+ model and powered by the 1.6HDi 90hp engine, this model featured cherry red and glossy black exterior and interior detailing and black metallic paint. Also included were roof bars, 17-inch cherry red diamond-tipped alloy wheels, air conditioning, cruise control with speed limiter, Connecting Box (USB socket & Bluetooth system), electrically adjustable door mirrors and front electric windows.

Here's a car that makes the most of every millimetre of its size and incorporates everything Citroen has learned over the years about MPV versatility. Slip into the back and you'll enjoy a 1.66m-long cabin - one of the longest in its class and a rival for a number of MPVs in the segment above. Which means that with the front seat adjusted for a six-footer to drive, there's still plenty of legroom behind. At the same time, there's more headroom than anyone bar the extremely tall would ever need: it's all enough to make an equivalently-sized supermini feel ridiculously cramped. And there's more. In addition, to increase either boot volume or rear legroom, the split-folding rear seats individually slide back and forth independently. Elbow room is class-leading and knee room is also plentiful, even with the rear bench moved right forward. There's even a quality feeling to the fit and finish, thanks to plenty of soft-touch plastics. And storage capacity? Well, if the 385-litre boot isn't big enough, just slide the rear seat forward to increase it to 500 litres (more than you'll get from an executive saloon like BMW's 5 Series), keeping all your passenger space. If you don't need that and still want more luggage room, the back seat can be folded away with one easy hand movement to give you an entirely flat 1506-litre loading area, 150-litres more than a direct rival like Renault's Grand Modus can offer. You can even further extend your load length - to over 2.41m - by folding the back of the front passenger seat completely down, allowing you to take long items like surf boards and bicycles. There's also a removable boot floor which can be positioned at two different levels, at or below the floor line. Plus cubbyholes and storage spots are everywhere, on plusher models even at the rear passengers' feet. And there are the usual careful touches like the glovebox on air conditioned models that keeps chocolate or drinks cool. We'd also allow a few extra hundred to tick the boxes for options like aircraft-style trays that can be installed in the rear with reading lights and cup holders and the special extra child rear-view child mirror that lets you keep an eye on the fights and tantrums in the back without turning round.

The C3 Picasso has drawn on plenty of existing know-how and, with the exception of one recall to fix what Citroen called 'the remote possibility' of the brakes being activated by front seat passengers pressing on the cross-cabin linkage under the footwell, has thus far proved remarkable trouble-free. Check that the windscreen washer works. The Picasso suffers from an issue whereby if the washer bottle becomes frozen, trying to apply the washers merely blows the fuse. Something to watch out for when it gets cold. Squeaky driver's door hinges are easily sorted with a quick squirt of WD40. Apart from that, the car stands up to the rigours of family motoring very well.

With this kind of car, the driving experience is likely to be unremarkable but the travelling experience can often feel rather special. So it proves with the C3 Picasso. Yes, the steering's a little light before higher speeds firm it up, the long-throw gearbox isn't the slickest you'll ever use and of course there's notable body roll on really tight corners but that isn't what you remember after driving this Citroen. No, what sticks in your mind are the things that are really important in this class of car: stuff that makes it a pleasure to drive while you're engaged with the boring things of life - nipping down the shops or picking the kids up from school. Let me give you a few examples on this. Apart, perhaps, from the digital speedometer, the first thing that you'll probably notice behind the wheel is the exceptionally light and airy cabin, courtesy of one of the largest glazed areas in the segment, with up to up to four and a half square metres of glass used around the side and the top of the car if you opt for the panoramic glass roof. Then there's the high-set seating position, with its excellent range of steering and seat-height adjustment, which gives you a commanding view of the road. And the three-part panoramic windscreen with its slim pillars which makes urban driving much easier courtesy of an unusually wide side vision angle. Manoeuvrability and a tight turning circle are also a boon around town, while the car's vertical rear end makes parking easy. The soft suspension soaks up poor road surfaces in proper Citroen style too, which can make you feel rather smug as you watch other road users crash from one pothole to another.

The Citroen C3 Picasso is, to many small families, as close to the template of perfect transport as has yet been devised. It's affordable, reliable, unquestioningly practical and even looks pretty good in the bargain. As used car buys go, it merits a solid thumbs up. 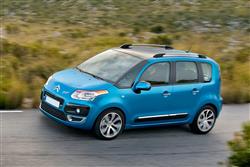 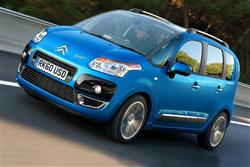 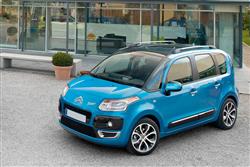 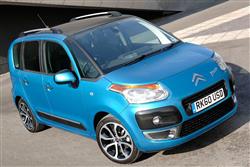 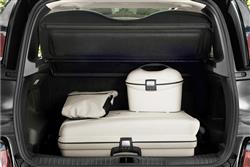 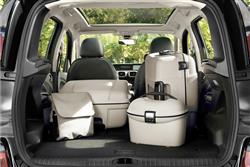