If you need a family-sized five-seat MPV but don't necessarily want one, look straight to this car, the second generation Citroen C4 Picasso, launched in 2013. It's extravagantly designed and comes with some genuinely innovative features. The basics of space, safety and cost-effectiveness are all taken care of, but where this model really excels is in the other things: style, technology and a very emotive feel. It's a bit special. Here's how to bag a used one.

Picasso. The name that launched both a generation of art and a several generations of small Citroen people carrier. The great Spaniard's family fell out with each other over the decision to grant this French car maker use of Senor Pablo's famous name, but it's certainly been worth the legal wrangling for Citroen. By 2013, the brand had chalked up over three million Picasso model sales, the success story starting with the Xsara Picasso, launched in 1999. In 2007, that model was replaced by a far more modern successor, the C4 Picasso, a car that in 2013 was re-launched in the futuristic second generation guise we're going to look at here. It's tempting to think of MPV people carriers as one of the most boring sectors of car design; boxes on wheels if you will, with little wit or verve to their execution. Here, things are very different. Yes, what we have in this case is a box with wheels at each corner, but as any kid at Christmas will tell you, not all boxes are created equal. It may have been created to go head to head with five-seat MPV rivals such as the Ford C-MAX and the Renault Scenic but this MK2 C4 Picasso feels cut from rather different cloth. Emboldened by the success of their boutique DS line of cars, Citroen decided to inject a measure of style and desirability into many of its other wares and this design still looks like something that's just driven off a motor show stand. But at launch in 2013, it faced a difficult task. Then, as today, the People Carrying market was very different from the one Citroen started with at the turn of the century. Many buyers in this sector now demand more than five seats and even those that don't may well feel that the latest generation of more practically-orientated Focus-style family hatchbacks, Qashqai-like Crossovers and small SUVs offer many MPV-like virtues. On top of that, by 2013, Citroen was also offering the only slightly smaller C3 Picasso supermini-MPV to buyers, a car that could offer many of this C4 model's virtues for a useful price saving. Hence the need here for a very clever piece of product design indeed, one that clearly speaks to family buyers who need practicality but don't want to sacrifice style. Which is how we ended up something so glassy and futuristic-looking, a car that comes stuffed with hi-tech gadgetry and fitted with a more up-to-date range of more efficient engines. This MK2 model C4 Picasso sold until mid-2016, when it was replaced by a lightly facelifted model.

Most buyers of the second generation C4 Picasso model that we surveyed were very satisfied but inevitably, there were a few issues with some cars. One owner had a problem with the electronic handbrake that stuck on and stranded him. Others complained about starting problems, electric window squeaking and an engine management light that kept coming on in the dash binnacle. One owner had a problem with a drive belt that came off the runners. Look out for all these things when you check out used stock.

Climb aboard a MK2 model C4 Picasso and before you even set off, it's clear that this is going to be a somewhat different experience. There are no conventional instrument dials and nothing directly in front of you, with key driving information instead displayed on a giant centre screen in the centre of the dash. The first thing that'll probably grab your attention though, is a windscreen that stretches up and almost over your head, affording a panoramic view not just of the road ahead but also sky above. The wishbone-shaped windscreen pillars have glazed centre sections to further boost visibility and there's a low window line that not only makes manoeuvring easy but should also give children a better view out and potentially stop them feeling sick. If you opt for a variant fitted with one of the semi-automatic 'Efficient Tronic' gearbox, this car will feel very different to drive too. This set-up isn't a full auto but a manual transmission without a clutch, which means that for smooth progress, you have to momentarily lift off between changes made via the steering wheel-mounted paddle shifters. Until you learn to do that, the car will seem jerky and unresponsive but once you adjust, the system actually works very well and is certainly easier to use in the improved ETG6 form fitted to this second generation design. We can see though, why many would be more comfortable with a more conventional 6-speed manual 'box - there was no conventional auto offered to C4 Picasso customers. Whatever transmission you choose, one thing remains constant: the silky smooth ride. Which is the thing we like most about this car. It may come as news to some motoring journalists but most MPV buyers don't routinely want to throw their cars about as if they were on stage from the RAC Rally. What most of them would prefer is a model that rolls the red carpet over the average appallingly surfaced British road. As this one does. Nothing in this part of the market can approach the pillowy ride quality on offer here. But the trick, which Citroen hasn't always mastered, is to offer this without inducing the kind of bodyroll and handling woollyness that removes any element of enjoyment from the driving experience altogether. In this respect, it's certainly true that this impressively refined C4 Picasso is a useful step forward from its predecessor. A freshly developed 'EMP2' or 'Efficient Modular Platform' shaved 140kgs off the kerb weight which certainly helps in making the car feel more agile. But it's still way off the sprightly standards of a rival Ford C-MAX or even a Renault Scenic in terms of steering feel and body roll. And, in true Citroen style, the brakes are very heavily servo-assisted, reacting to the merest brush on the pedal. If you can ignore all that, get familiar with the car and even start to push it a little through the corners, you'll find that the anchors are reassuringly effective, the steering's actually quite accurate and grip relatively plentiful. It's just getting to that point, something you probably won't manage on a brief test drive. In other words, don't be put off by initial unfamiliarities of design and drive. After all, you probably wouldn't be looking at this Citroen in the first place if you didn't want something just that little bit different from the usual character-free compact people carrying experience. Just enjoy this car for what it is as you float over road imperfections, marvel at the unusually hushed levels of refinement and enjoy the benefits of a commanding driving position that's a huge help at roundabouts or when parking and, with this panoramic screen, makes it seem like you're suddenly viewing the world in high definition. The engine choice is naturally weighted towards diesels because that's what Citroen does very well and it's also what British customers want to buy. The 1.6-litre e-HDi 115bhp variant is the big seller, but you can save quite a bit by opting for the entry-level 90bhp 1.6-litre HDi model which doesn't have the so-called 'Airdream' e-HDi efficiency tweaks but isn't really much more expensive to run. Or an awful lot slower. Rest to 62mph in the HDi 90 variant takes 12.9s, only around a second slower than what you'd manage in the pokier version. Both variants do however, struggle a bit when powering on fully laden when the road starts to rise, as does the entry-level 120bhp 1.6-litre VTi petrol model that offers similar on-paper performance and marks the price starting point for the range. If you do want something with a little more mid-range pulling power, then you could go for the THP 155 petrol version that uses a MINI Cooper S 1.6-litre turbo engine that, not surprisingly, moves this car on rather swiftly, making sixty two mph in 9s on the way to 130mph. For all the reasons we've already given you though, we don't think such a performance package suits the character of this car. No, if funds permit, the optimum C4 Picasso engine is the one at the top of the line-up, the impressive Blue HDi 150. Its performance figures are virtually identical to those of the THP petrol, yet it's got around 50% more pulling power and is around 50% more economical. Enough said.

Not every family needs seven seats in an MPV and for those that don't, this MK2 model C4 Picasso offers a smartly-styled, hi-tech equipped and very practical alternative. Though not especially enjoyable to push hard, that's because it's aimed exactly where it should be targeted - at mums and dads rather than at driving enthusiasts, with impressive long distance comfort you'll also appreciate on the school run day-in and day-out. So much was true of this car's predecessor but this second generation model went a lot further, offering perfect proof that a people carrier can do more than just provide comfortable, efficient transport. It can be.. well, what Citroens once were: clever, futuristic, expressively designed. Cars you'd be genuinely proud to own. We think you'd feel like that if you needed a model of this kind and this were on your driveway. True, it's a pity that you have to stretch to an up-spec trim level for all the features that show this car at its best but if you can do that and tick all the right boxes, you'll get an MPV that really seems to have been created with a bit of love. From the panoramic windscreen to the lounge-style massaging passenger seat, from the widescreen HD instrument display to the fact that you can sit and Facebook your friends on the touch screen, it's a car that's a joy to operate. And for us, a joy to look at, as different and refreshing in design as it will be to own. In short, the Citroen we used to know is back. The manufacturer that took risks, created magic and brought us cars that sat apart from the ordinary norm. Cars exactly like this one. 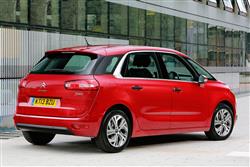 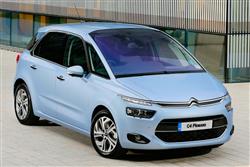 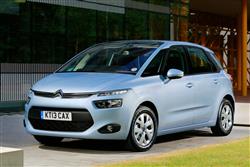 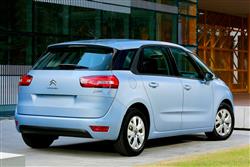 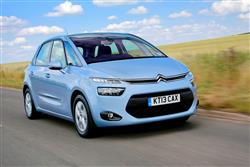 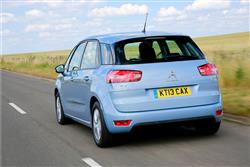