In 2016, Citroen updated its classy, glassy second generation Grand C4 Picasso 7-seat MPV, aiming to offer the most practical, the most versatile and the most elegant solution to families shopping in the seven-seat mid-sized MPV segment. It's a sector aimed at those who need either a big boot or the option to take more than five folk, but don't want the sheer size and expense of a large segment People Carrier. If that's you and you're shopping for a used mid-sized 7-seat MPV from the 2016 to 2018 period, then you'll find that this efficient and sophisticated French contender takes care of the basics of space, safety and cost-effectiveness with ease. Where this model really excels though, is in the other things: style, technology and a very emotive feel. By People Carrying standards, it's a bit special.

Buying a seven-seat MPV is usually an exercise in sacrifice. You accept the fact that in return for three seating rows, you'll get something boxy, boring and bland. Or will you? With this improved post-2016-era second generation Grand C4 Picasso model, Citroen beg to differ on that score. The Picasso name has been synonymous with Citroen People Carriers since the turn of the century and with seven-seat MPVs since the first generation Grand C4 Picasso model was launched in 2006. That car tapped into the major growth area in this segment amongst buyers who really only needed five seats but wanted the occasional versatility of a couple of extra fold-out chairs in the boot. This one made that arrangement more usable, thanks to extra interior room that was provided without the kind of excessive extra vehicle length that buyers in this sector tend not to want. This additional space comes courtesy of the class-leadingly long wheelbase conferred upon this car by a clever, multi-patented EMP2 platform that's also claimed to sharpen up the handling. It all sounds very promising, particularly as these practical and dynamic virtues are clothed in what is arguably the most stylish shape ever to clothe a family-minded MPV. Less futuristic at the original launch of this second generation model back in early 2014 was the relatively old-tech engine range and the media connectivity on offer. Both these things though, had been brought up to date by the time of the launch of this post-2016-era model and this revised Grand C4 Picasso claimed to be as efficient and media-savvy as any family buyer could want it to be. In prospect then, what we have here is a very clever People Carrier indeed, with a glassy, futuristic combination of hi-tech style and efficient practicality. This car sold until Spring 2018, when it was re-launched as the 'Grand C4 Space Tourer'.

Citroen is a brand with a heritage in design flair. A huge proportion of this vehicle's budget was lavished on aesthetics inside and out, with the result being a futuristic take on family transport that instantly makes almost everything else in this sector look dull and derivative. We liked it back at this model's original launch in 2014 and we still think this MK2 model Grand C4 Picasso to be an eye-catching thing. Obviously back in 2016, Citroen did too, for the French maker didn't make many aesthetic changes as part of this facelift. There was a smaller lower grille surrounding the number plate and buyers got extra chrome trim around the high-set daytime running lights. Get yourself behind the wheel and probably the first thing you'll notice is the standard Panoramic windscreen. Push up the sun visor and your normal upward 28-degree angle of vision is increased to a massive 108-degrees. The dashboard is dominated by twin screens. Most new cars from this period have some sort of central infotainment screen like this Citroen's tablet-style 7-inch 'Touch Drive Interface' lower display, but more unusual is the snazzily futuristic 12-inch panoramic HD panel up top which replaces the normal set of conventional-dialled instrument gauges - providing you avoid entry-level trim. We also really like the optional rear-facing 'conversation mirror', there to give an unimpeded view of which child has just stuffed its sticky sweet into your 12v socket. So how will those children fare once they're installed rearwards and ready to plug their gaming equipment into one of the three 12v sockets scattered around the car? Well, pull open rear doors that open wide to a 65-degree angle for excellent access and it certainly looks pretty spacious, with comfort you can readily appreciate thanks to a proper seating arrangement. Unlike many People Carriers, this one doesn't position the unfortunate middle rear passenger with legs astride a central transmission tunnel and perched on some hard and narrow pierce of bulging foam. Instead, there's a completely flat floor and a rear cabin seating area made up of three separate identically-sized chairs (all with Isofix childseat mountings) that can be reclined, folded flat or (on most models) slid backwards and forwards independently of one another. Finally, a word or two about the feature that sets this Grand C4 Picasso apart from its five-seater showroom stablemate - the third seating row. Citroen reckons that it's class-leadingly spacious at the very back, but that still doesn't mean it'll be especially comfortable for two tall adults on a long trip. Having said that, we need to be fair about this: no compact MPV of just 4.6m in length is going to be able to offer that.

Most buyers of this improved second generation Grand C4 Picasso model that we surveyed were very satisfied but inevitably, there were a few issues with some cars. One owner had a problem with the electronic handbrake that stuck on and stranded him. Others complained about starting problems, electric window squeaking and an engine management light that kept coming on in the dash binnacle. One owner had a problem with a drive belt that came off the runners. Look out for all these things when you check out used stock. We came across problems with vibrating electric windows and the engine management light coming on in the digital dashboard. Otherwise, check for rear seat child damage, check the alloy wheels for kerbing and scratching and insist on a fully stamped-up service history.

On the move in a Grand C4 Picasso, the driving experience is a little bit different from what it would be in other rival family MPVs. There isn't much fun to be had in terms of driving dynamics but in compensation, you float over road imperfections, marvel at the unusually hushed levels of refinement and enjoy the benefits of a commanding driving position that's a huge help at roundabouts or when parking and, with this panoramic screen, makes it seem like you're suddenly viewing the world in high definition. Under the bonnet back in 2016, much had changed since this car's original launch, Citroen having replaced all of its mainstream engines by that year. At the foot of the range, there's a downsized 1.2-litre three cylinder PureTech turbo unit with 130bhp that'll make a lot of sense for low mileage petrol people. Alternatively, there's even more efficient BlueHDi diesel technology based primarily around a 1.6-litre powerplant offered with either 100 or 120bhp. Both derivatives manage 74.3mpg n the combined cycle and around 100g/km of CO2. If you want more pulling power, a 2.0-litre BlueHDi 150 variant is available at the top of the range.

So, if you want a compact but spacious seven-seat MPV, look at the bigger Pic. Is it that simple? Well it depends upon your priorities we suppose. There may be some buyers in this segment for whom ultimate driving dynamics dictate the choice of a Ford or a Vauxhall in this segment. We can only imagine these people to be in the minority though. Most in search of a modern People Carrier prioritise practicality, running costs and clever design. If, as here, they can have all of this with class-leading style and technology thrown in, then so much the better. This second generation C4 Grand Picasso MPV developed this proposition, then further sharpened it with the well-judged package of revisions added to the post-2016-era model we've been reviewing here. It its original form, this MK2 model's futuristic looks always seemed a little out of kilter with the old-tech petrol engines and rather basic levels of media connectivity provided. With all this sorted in the post-2016-era cars, this Grand C4 Picasso offers perfect proof that a People Carrier can do more than just provide comfortable, efficient transport. It can be.. well, what Citroens once were: clever, futuristic, expressively designed. Cars you'd be genuinely proud to own. If that sounds appealing and you're in the market for a model like this one, then we think you'll find a lot here you'll like. 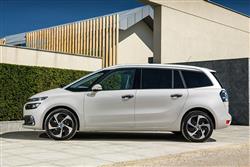 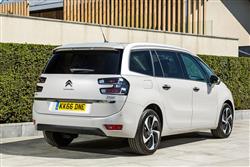 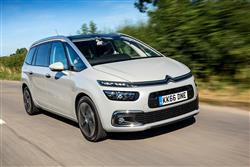 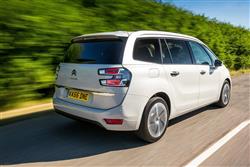 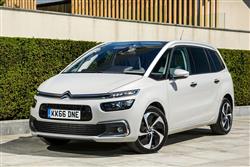 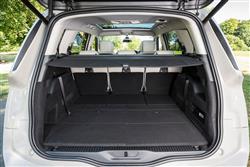