The DS3 stylised performance compact hatch was first launched with Citroen badging back in 2010, then re-launched as a stand-alone DS product when DS became a brand in its own right in 2015. It's this later 'DS' DS3 that we look at here, a car that saw the brand through the next four years to the period where it could create its own bespoke designs. The change from 'Citroen' to 'DS' branding in 2015 was accompanied by a few changes, a light model refresh adding fresh engine options, more media connectivity and greater scope for individuality with both the hatch and Cabrio bodystyles. This car's fundamental fashionability though, is what really sustained sales. Even as a used car, this model still gets people talking.

This DS3 was the car that rejuvenated the fortunes of its Citroen maker, following this model's original launch in 2010. Young, affluent, style-conscious customers were tempted by its blend of fashionable sporty practicality and Parisian style. In its lightly refreshed form in 2015, this design was tasked with performing a similarly pivotal role for the freshly-formed DS brand as the entry point to the company's likeable line-up. It's quite possible that you're already very familiar with this car - at least in its original form - and if so, you'll know that it's a trendy small urban trinket in the MINI or Fiat 500 mould. Or almost. The original DS3 designers certainly had their eyes on cars of that kind, but instead of copying rivals with a 'retro' look, they instead championed a fresher, more forward-thinking shape that had the added advantage of much improved practicality. It meant that DS3 owners could enjoy Sloane Street style with Sainsburys sensibility, a winning combination further developed by the launch of a Cabrio version in 2013 and the introduction of more up-to-date engineware a year later. As a result, sales momentum was maintained and by the end of 2015, over 390,000 DS3 models had been sold. By then though, things were changing. The DS concept this car had first pioneered had swiftly been extended into larger DS4 and DS5 models, these cars creating a Citroen sub-brand so successful that it was decided DS should be created as a premium auto maker in its own right. The DS4 and DS5 ranges were quickly re-styled and re-positioned within this newly-formed marque's model line-up and the DS3 followed suit early in 2016, creating the car we're going to look at here. There was more though, to this improved DS3 than merely a different badge on the bonnet. Smarter styling was complemented by the addition of two fresh engines to the line-up, including one for the kind of properly potent hot hatch variant the standard model range had previously never had. There was also more equipment, extra scope for personalisation and, inside, extra media connectivity via a smartly hi-tech 7-inch colour touchscreen. It was all just about enough to sustain the car through to the end of 2019 when a new design based on a more modern CMP2 platform, the DS3 Crossback small SUV, took over.

We should start by pointing out that as a whole, DS3 owners are a very happy bunch. If your perception of DS / Citroens corresponds with unreliability, then it's time to change your perspective. The later post-2015-era DS3 range we're looking at here comes from a time when most of the original post-2010 model's teething issues had been sorted out. All that having been said, there have been faults reported and we found a number on our various surveys: you might want to look out for these on the used market. There have been reports of sticky rear door hinges and a few owners have reported minor electrical faults, some connected to the wiring harness. One owner we came across had a windscreen wiper fuse blow. Another had experienced fuel sensor and fan cooling issues. Watch out for trim rattles, particularly in areas like the exterior rubbing strip. And a few petrol models have reported issues with light and temperature sensors, turbo pumps and cam chains. Not that there's any real issue with the turbo THP petrol engine that sustains pacier models. It was co-developed with BMW and is an excellent powerplant with a great reliability record. You'll find versions of this engine in cars such as the Peugeot 208 GTI and the MINI Cooper S, so it's tried and tested tech.

Under the bonnet of mainstream hard-top and Cabrio models, there's a wide choice of engines. For petrol people, there's a choice of either a 1.2-litre three cylinder PureTech unit or a 1.6-litre THP powerplant. Go for the PureTech variants and the range starts with a normally aspirated 82bhp derivative, but it's better to stretch to one of the turbo options, offering either 110 or 130bhp. The 'PureTech 110' variant is the only one in the range offering the option of automatic transmission - the PSA Group impressively efficient EAT6 gearbox. For more performance, you'll need the turbo THP unit. This was offered with 165bhp - or with 208bhp if you choose the 'Performance' hot hatch variant that was added in at the top of the range with the range to DS branding. This gets a wider track, lowered suspension, uprated brakes and a Torsen limited-slip differential. As for diesel power, well there's a choice of either 100 or 120bhp versions of the PSA Group's usual 1.6-litre BlueHDi engine. These are impressively clean and frugal: expect 83.1mpg on the combined cycle and 87g/km of CO2 from the BlueHDi 100 variant, for example (both NEDC figures). Whatever engine you choose in your DS3, you should find the car good to drive: it certainly feels very different from the Citroen C3 supermini it's based upon. And if you opt for the Cabrio bodystyle, there's the added bonus of fresh air thrills whenever you want them, courtesy of a roof you can operate at speeds of up to 75mph.

You can see why the DS3 struck such a chord with its customers. Even today, the basic shape looks fresh and fashionable and it was personalisable to an extent that wasn't possible with many rivals. Plus the subtle DS-branded re-style proved to be just enough to keep the design feeling current. Back in 2015, we approved of the more fundamental changes made here as part of the change to full DS branding - the PureTech 130 petrol engine, the 'Performance' hot hatch variant and the 7-inch infotainment colour touchscreen for the cabin with its extra media connectivity. These built upon the changes already made to this car towards the end of its life as a Citroen, things like the 'Active City Brake' system and frugal BlueHDi diesel technology. It all means that if you think you know this DS3, then you probably don't. The DS brand letters stand for a 'Different Spirit' and in this later form, this car aimed to offer just that. Comparable rivals from the period remain either conventionally dull - or limited by the retro appeal they tried to recreate. Which leaves this affordable DS model with a clearly defined and in many ways still quite unique appeal in both hatch and Cabrio guises. In summary, if you're looking for a trendy, fizzy little hatch or cabrio from the 2015-2019 period, three doors are sufficient and your fashionable trendiness must keep some practical perspective, it's hard to ignore. 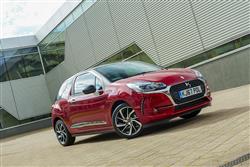 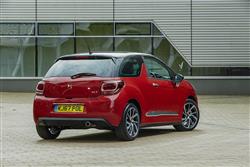 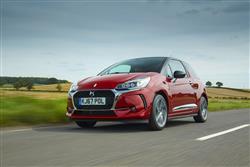 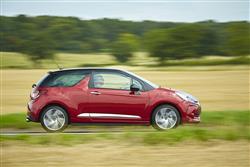 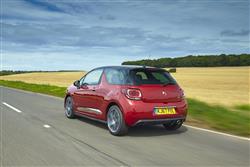 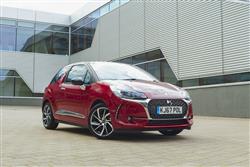