The DS4 blurs the boundaries between car categories but will it prove a clear cut winner? Jonathan Crouch looks at the BlueHDi 120 version.

The improved DS4 offers a stylish twist on the family hatch theme but in BlueHDi 120 guise it has its heart an eminently sensible set of underpinnings. In fusing the extrovert with the deeply pragmatic, the DS brand has created something intriguingly desirable.

Niche marketing has a lot to answer for. As an excuse for bringing intrinsically unpopular items to market, it has its critics. Every once in a while, these products designed to appeal to a few eccentrics break out into mainstream success. Does that make them niche marketing failures? Who would have ever predicted that fixed gear bikes would become so popular? Once the preserve of hipsters in tight vintage-style jeans, check shirts worn with a hoodie, Vans sneakers and oversized sunglasses, they're now built by the big companies and are in your local bike shop with smugly inflated price tags. Citroen hasn't been slow to recognise this phenomenon and its DS sub-brand appeals to those who wish to be seen as a little edgy but maybe don't want to stomach the sacrifices that come with fully embracing the radical. Call it hipster-lite. Its DS3 was a hot hatch with a bit of attitude and now there's the DS4. It's like the 'after' shot on a family hatch makeover promo.

Taking the engines and the underpinnings of a car never intended to prioritise driving enjoyment - Citroen's C4 - then combining them with a higher ride height seems hardly to be a recipe likely to produce any kind of tarmac terrier. But astonishingly, by some kind of Gallic Black Magic, that's exactly what's being served up here. But I'm getting ahead of myself. Let's start with first impressions from behind the wheel. You sit 15mm higher up than you would in a C4 - or in any other normal Astra-sized family hatch come to that - yet at the same time, find yourself in a focused, sporty cockpit gripped by wraparound seats and cocooned in a black headlined, leather-trimmed cabin. In a way, it's a little disconcerting. A feeling that continues out on the road. The stiffer suspension and beefier anti-roll bar that this design enjoys over its C4 stablemate combine to ensure that this handles like a low, focused coupe, not a softly-sprung family hatch - which feels a little strange given the high-ish driving position. It's an unusually well judged damping set-up, ensuring that this car is supple over bumps but beautifully controlled in its movements. And you wouldn't know the electrically powered hydraulically assisted steering from the system found on the C4: yes it's still lighter than some enthusiasts will want, but there's now feedback aplenty. Complementing that is a terrific 6-speed manual gearbox that allows you to snap up and down the ratios as if you were Sebastien Loeb in a round of the World Rally Championship. It all just goes to show how basically the same mechanical package can be tailored radically differently to suit different products. Performance? In this BlueHDi 120 variant, 62mph is reached in 11.4s.

I'm still trying to figure out how any vaguely coupe-shaped car with such an unusual relationship between length and height can emerge as pretty as this DS4. In traditional design terms, it shouldn't work. It should look dumpy and ill-proportioned but the DS4 appears squat, aggressive and taut. Hats off to designer Olivier Vincent. This latest version gets the smart DS front grille that originally debuted on the revised DS5 model with is 'DS Wings' signature and DS LED Vision headlamps. Another key change is the availability of a 'Crossback' model variant, which gains a 30mm increase in ride height and strong styling features that include grey roof bars, emphasised wheelarch trims and a black rear spoiler. The interior isn't quite so special, but don't blame Sean Johnson, the interior stylist for that. He has created some wonderful dash top finishes for the car which really set it apart, but DS's UK importers have decided that British buyers aren't prepared to pay for them and have given us more boring alternatives instead. Still, there are plenty of other touches that can be appreciated. The fascia dials are quite cool and the way the windscreen takes a hefty bite out of the roofline is a very nice touch. The 'bracelet' leather seats which resemble a watch strap in their interlinking cushions are also very classy. What's not quite so clever is the fact that the boldly-shaped rear side windows don't go down or hinge out. Style should come with a little sacrifice, right?

The DS4 BlueHDi 120 is offered in entry-level Elegance trim with a manual gearbox, with prices starting at just over £21,000. It's also available in plusher Prestige guise with either a manual or an EAT6 transmission. The entry-level Elegance version comes generously equipped, including six airbags, ESP, Hill Start Assist, air conditioning, daytime-running LEDs, 17" alloy wheels, front fog lights with cornering function, six-speaker Surround Sound audio system and cruise control with speed limiter and memory settings. The Prestige models feature 18" alloy wheels, automatic windscreen wipers and headlamps, front sports seats with electric lumbar adjustment and massage function, part-leather upholstery, automatic digital air conditioning, aluminium drilled pedals, rear parking sensors and the eTouch Emergency & Assistance System. Given the niche nature of the DS4 it's hard to know what exactly to compare it with in order to get an idea of the value proposition. MINI Countryman? Audi A3 Sportback? Best to take a look at it for yourself and make your own judgment on how appealing it is.

The BlueHDi 120 engine is the most economical unit in the DS4 range and its returns are hardly affected if you choose the EAT6 automatic version. Second generation Stop & Start helps, boosting fuel economy by up to 15%. Even if you choose the auto model, you'll manage 72.4mpg on the combined cycle and emit just 103g/km.The manual version improves those figures to 74.3mpg and 102g/km. Residual values should be stronger than those of comparable mainstream models, the DS brand attracting a strong core of followers. Couple that with the reasonable asking price and small ongoing running costs of the BlueHDi 120 models and you have a car that looks set to retain its value better than any comparably-sized French model in this segment of the recent past.

In fusing radical design with eminently sensible engineering, the DS brand has created an intriguing and attractive proposition with this improved DS4 BlueHDi 120 model. It looks for all the world as if it has just driven off a motor show stand, but the mechanicals are all tried and tested stuff and your day to day outgoings while running one will be less than some superminis. The only nagging doubt I have with the DS4 is that cars that are suddenly in vogue can just as suddenly find themselves out of favour. For about five minutes back in 2003 the Chrysler Crossfire was a seriously hot ticket. Seems hard to believe now, doesn't it? I suspect the DS4 has enough about it to appeal as something more than a mere fashion statement, but time will be the final arbiter there. In the meantime at least, this Gallic brand should be applauded for resolutely refusing to follow the herd. 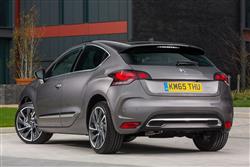 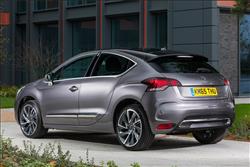 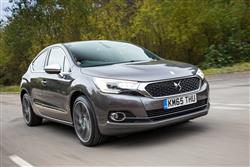 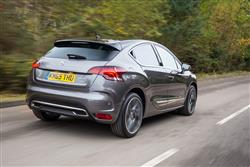 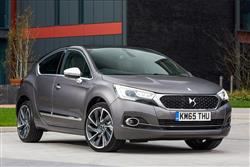 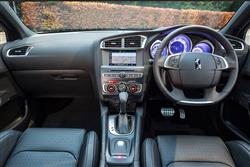