Known as 'The Goddess', Citroen's original DS saloon was for many, one of the most beautiful cars ever. In more recent times, both those famous initials and the design commitment they embody live again in the DS brand. This much improved DS4 model is the marque's mid-range offering, a premium five-door hatch targeting customers that'll be new to a French manufacturer of this sort. It's now offered with more personalisation options and the alternative of a 'Crossback' model that aims to interest crossover customers.

The Peugeot Citroen Group's premium DS brand continues the rejuvenation of its model range with this much improved version of a DS4 model originally launched under the Citroen banner. This revised design is a fully-fledged member of the DS range - and we're told that the difference is important. There's a proper DS-style front end, more of a premium feel and, if you want it, the option of a 'Crossback' bodystyle with roof bars and a higher ride height aimed at buyers attracted by sportier crossover models. It's certainly a different way to go if you were looking for an up-market Golf or Focus-sized family hatch and wanted something a little sportier and more individual, yet needed to stay within a reasonable budget. The efficient engine range will also be quite a draw too, as will the considerable scope for buyer personalisation.

Slightly more compact than the Citroen C4 it's based on, the DS4 is 60mm shorter, 20mm wider than that car and, in an effort to inject some 'Crossover' personality, 40mm taller. The DS engineers say that the resulting package manages to be more stable on the move, making the driver feel as if "they have the road at their fingertips." That ambition is backed up through the use of a MacPherson-type suspension set up at the front, and a flexible transverse beam at the rear, with hydraulic power steering. The engine range is wide and flexible and all units meet the most stringent Euro6 emissions requirements. Most will choose a 1.6, with diesel drivers selecting between 120, 150 and 180bhp BlueHDi powerplants. The BlueHDi 180 model only comes with the brand's EAT6 auto gearbox but its quite quick, making 62mph from rest in 8.6s. Then there are three petrol options, with the entry-level PureTech 130 unit being a satisfying choice, despite its diminutive 1.2-litre capacity. It does, after all, make 62mph from rest in a reasonably fleet 10.1s en route to 123mph. If you need more poke, then the older 1.6-litre THP turbo petrol engines that the brand co-developed with BMW provide it. The THP 165 unit only comes with EAT6 auto transmission but you can order the THP 210 variant with a 6-speed manual 'box. This latter variant is pretty rapid, making 62mph in around 8s en route to around 150mph. Available with both body styles is an Intelligent Traction Control system that optimises anti-skid control for the front wheels on surfaces with little grip. It also improves 'start-up' performance, particularly on snow-covered surfaces.

While it looks like a three-door coupe, this is in fact a genuine five-door hatch. The panoramic windscreen extends backwards into the roof and the dimensions and its styling give the car a compact and muscular look. This latest version gets the smart DS front grille that originally debuted on the revised DS5 model with is 'DS Wings' signature and DS LED Vision headlamps. Another key change is the availability of a 'Crossback' model variant, which gains a 30mm increase in ride height and strong styling features that include grey roof bars, emphasised wheelarch trims and a black rear spoiler. Inside the premium cabin, the driver faces an array of smart chrome-rimmed dials and a sculpted, contoured dashboard featuring a higher-tech 7-inch colour infotainment touchscreen. Other up-market touches include embossed leather door handles, plenty of chrome detailing and cool ambient lighting. Far more attention has been paid to build quality and refinement too, to match this up-market feel. Then there's that panoramic windscreen, offering front occupants a 45-degree view upwards and giving the cabin a real feeling of light and airiness also enjoyed by those in the back seats. And talking of the rear, there's proper space for two adults there - or three at a squash. Plus a boot behind of 370-litres, larger than that in rivals like VW's Golf or Alfa Romeo's Giulietta.

With DS4s being priced from around the £20,000 mark, this French contender isn't cheap - but then neither is its value proposition. And neither indeed are obvious rivals. Check out not only avant garde contenders like Alfa's Giulietta but plusher versions of more familiar family hatches like Volkswagen's Golf, Ford's Focus and Vauxhall's Astra and you'll find that they all retail at this kind of money. As do the nicest versions of Crossover Nissan Qashqai-class cars. In contrast, the DS4 offers something that little bit different and could even steal sales from premium hatches like Audi's A3 and BMW's 1 Series. There are two main trim levels - Elegance and Prestige - and as you move up the range, you'll find a whole series of unique features which the French brand hopes will hook potential buyers in the showroom. The top-flight sound system developed for this model for example, featuring what DS call 'effective soundscaping', with sound distributed evenly around the cabin. The air conditioning offers three different levels from soft to intense, and even the light colours on the instrument panel can be fine-tuned to your taste from white through to blue. For enhanced vision in difficult conditions, the front fog lamps provide extra light to boost visibility by up to 75 degrees when the vehicle is turning. Plus there's also a Blind Spot alert system to tell drivers of vehicles they might not see in their mirrors as well as a programmable cruise control with speed limiter. This DS4 can even think for you. Its standard 'DS Connect Box' provides a clever 'SOS & Assistance pack' will manually - or automatically - call the emergency services. There's also a 'Monitoring [ack' to give you eco driving tips and advise on future maintenance requirements, a tracking system for recovery of the car if it's stolen and even a Mapping pack that can advise you if the car leaves a given geographical area, should you lend your DS4 to someone.

None of the DS4's engines are especially thirsty or dirty but if fuel economy really is a priority, the 120bhp BlueHDI diesel variant delivers citycar-like returns - 74.3mpg on the combined cycle and 100g/km of CO2. Even the BlueHDi 180 model manages 64.2mpg and 115g/km. If you look at the petrol options, the PureTech 130 1.2-litre derivative is impressively efficient, managing 55.4mpg and 119g/km. You'll need deeper pockets to run the top THP 210 version of course, but this car still returns around 45mpg and around 150g/km. And there's 'FreeDrive', a customer support package aimed at taking all the worry and much of the cost out of ownership. It can be individually tailored to include everything from servicing and maintenance, MOT testing, roadside breakdown and recovery - even replacement of wear and tear items like tyres.

This improved DS4 may conceptually remain as an ordinary five-door Focus-sized family hatchback but it's been designed to make you feel like you've bought something much, much nicer. A car now a world away from the standard Citroen C4 hatch upon which it's based. The option of the 'Crossback' derivative should widen its market appeal, but whichever version you choose, expect to find the beautifully-trimmed cabin spacious, the engines efficient and powerful and the technology impressive. Here then, is a car that, for the price of something plush and ordinary, delivers the extraordinary. Just as DS models always should. 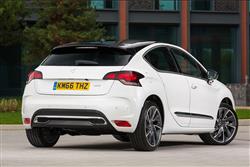 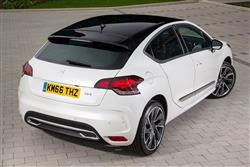 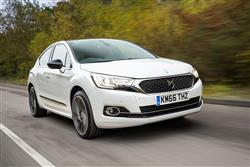 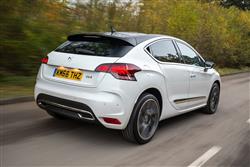 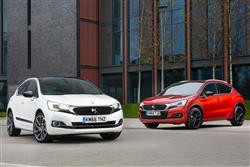 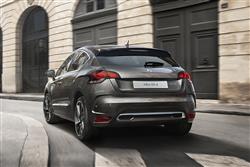