In 2015, Fiat brought us this characterful 500X small SUV Crossover model. It's bigger than it looks and there's lots of choice when it comes to engines, drive systems, transmissions and a whole stack of personalisation options. If you're looking for a surefire conversation starter, you can't do a lot better.

These days, every mainstream brand needs a small, trendy SUV Crossover. In 2015, we got Fiat's take on the Juke-genre, the fashionable 500X. This car's pert shape has none of the awkwardness of its MPV stablemate, the 500L. And it shares just about all its engineering with its FCA Fiat Group cousin, the Jeep Renegade. Predictably, the 500X is more affordable though, priced to deliver the numbers in this sector and engineered to build on this Italian maker's heritage of affordable compact little all-weather runabouts. Does it make sense as a used buy? Let's take a look. Here, we're going to concentrate on the earliest version, produced between 2015 and 2018. This was replaced in early 2019 by a facelifted version with new petrol engines and a front driven-only format.

There aren't too many small Crossovers with styling that gets an almost universal vote of confidence, but we really haven't chanced upon anyone who doesn't like the 500X. Designed in-house by Fiat's Centro Stile studio, this model not only has clear links to its siblings in the current 500 family but also to the iconic 1957 original, most notably when it comes to the large circular headlamps, the brightwork on the nose and the distinctive clamshell bonnet. 'Cross' and 'Cross Plus' models get the full 'urban SUV' look, with extra plastic cladding, roof rails and chunkier bumpers with skidplates front and rear. In short, all the calling cards you'd expect to find from a vehicle of the Juke genre. Seat yourself at the wheel and it doesn't initially feel very 'Fiat 500'. What's delivered here is as different from that little citycar as you'd expect it would be, this being a larger and more expensive design. Some semblance of familiarity is maintained by a smattering of '500' model line design cues - things like the quirky metal door handles, the hard round head restraints, the boiled sweet-like buttons and the pool ball-style gear knob you get on manual gearbox models. The model-branded body-coloured plastic dashboard facing is a familiar touch too, though the enamelled surface you get on cheaper versions is preferable to the sandpaper-style finish applied to plusher models. This panel surrounds what is arguably the cabin's most eye-catching feature, the 5-inch Uconnect infotainment touchscreen fitted to all but entry-level versions and expanded to 6.5-inches in size on top variants. In the rear, there's reasonable room for three. As usual in this class of car, room for your knees and legs is at a bit of a premium, pitched somewhere between the space you'd get in a Fiesta-sized supermini and a Focus-sized family hatch. But it's fine by segment standards. Raise the tailgate and you discover a 350-litre boot capacity. Push forward the 'Fold&Tumble' 60:40 split-folding rear bench and 1,000-litres of fresh air will be freed up thanks to seat backs that fold almost completely flat.

Our 500X ownership survey revealed more satisfied owners than we expected but there were still a few niggles. We came across reports of the stop/start system failing to operate and the USB ports not functioning. The Uconnect infotainment system can disconnect itself arbitrarily and sometimes won't work on its audio settings. And some owners have got erroneous dashboard warning messages - for flat tyres for instance, or for the lights not working. Another owner found the climate control display had failed. One owner found the interior trim lost its colour after three months. In another case, there was an electronic parking brake fault. As in other Fiats, the auto gearbox doesn't get very favourable reviews, so try before you buy. Check for upholstery damage caused by child seats in the back, typical supermarket dints and scrapes, slipping clutches on the manual cars and ensure all the electrical functions - which can get surprisingly sophisticated on up-spec models - work as advertised as these can be expensive to fix. Look out for potential issues with all of these things on your test drive.

One of the advantages of choosing a 500X in this segment is that it offers a decent range of proper four-wheel drive options for the few customers in this sector who'll want that. Most buyers though, will have an only occasional need for extra traction, something that can be covered off by this car's neat 'Drive Mood' Selector system, operated by a rotary dial down by the gearstick. As well as dynamic 'Sport' and 'Auto' settings that tweak throttle, steering, stability control and gearchange response, this set-up offers a mode that gives even 2WD variants extra traction in slippery conditions: it's called 'All Weather' or 'Traction', depending on the model you select. As for engines, well petrol buyers get an entry-level 110bhp 1.6-litre E-TorQ unit, but green pump-fuelers are better served by 140 and 170bhp versions of Fiat's smooth 1.4-litre MultiAir powerplant, the latter available with 4WD. Both these units can also be had with a hi-tech 9-speed auto gearbox you can also have on the top 140bhp 2.0-litre MultiJet diesel version, another 500X variant available with 4WD. Further down the diesel range, there are 1.3 and 1.6-litre MultiJet units, respectively offering 95 and 120bhp. Whatever your choice of engine, handling is taut and body roll well controlled, the pay-off for a firm ride.

Though this 500X draws upon the heritage and history of Fiat's 500 model line, it doesn't depend on it in the way that previous spin-off models have done. Even if you had no idea what the original 500 was, you'd enjoy this car. It looks good, drives well, is decently equipped, comes with a pretty efficient set of running costs and is anything but boring. Combine all of this with clever connectivity, practical versatility and the prospect of fashionable personalisation and you can see why Fiat did well across Europe with this car. It has the X-factor. 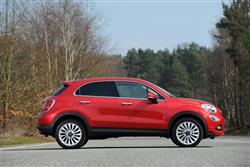 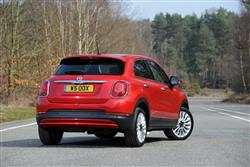 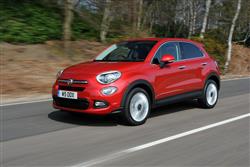 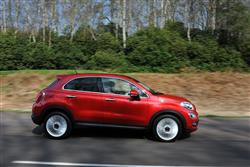 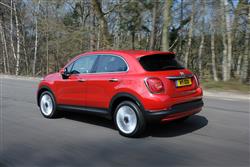 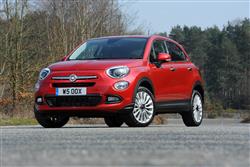