Although it was a good deal plusher than its rather utilitarian forebear, Fiat's 2004 generation Panda nevertheless filled a niche for those looking for inexpensive, cheeky but fun transport. Winner of the 2004 European Car of The Year award, the Panda's image got a significant fillip and sales have been strong ever since. Used demand is similarly high so it's unlikely you'll find any screaming bargains. Nevertheless it's worth shelling out a small premium for the Panda. It's got a personality all of its own.

The second generation Panda didn't have the easiest start to life. Originally slated to be called the Gingo, Renault did Fiat a huge favour by insisting they ditch this awful moniker because it sounded too similar to their Twingo - a car that competes for the same market share. Quite why Fiat wanted to ditch the Panda name in the first place is a little baffling as it's still remembered by most as a car that was inexpensive, rugged and ahead of its time; qualities you'd think Fiat would have wanted for association with their citycar. Picking up the European Car of The Year award is often a poisoned chalice and there have been a long history of duffers being given this gong, but the Panda was a worthy recipient. Mind you, choice wasn't a Panda watchword when it arrived in the UK with only 1.1 and 1.2-litre petrol powerplants on offer. Sales proved strong despite the lack of a diesel engine, a situation rectified in early 2005 when a 1.3-litre Multijet oil burner was slotted into the range. At the same time there was the return of yet another favourite - the Panda 4x4. Once a favourite of the country set, the Panda 4x4 was as close to indestructible as it's possible for an Italian car to be and the latest model, dubbed the 'Climbing' on the continent, also seemed to be made of the right stuff. The 100HP Panda arrived late in 2006 with a 1.4-litre engine making, as you may have guessed, some 100bhp.

Although the Panda was last sold in the UK in 1995, it retains a strong identity and this will help kick start sales of the latest car. Unlike some of Fiat's recent offerings that have featured rather 'challenging' styling, the design of the Panda is straightforward, and appealing. It does feature a few stylish touches however, including the profile of the glazed area that arches back to a neat quarter window which in turn butts up against an enormous vertical rear light cluster. The Panda also features well-defined 'hips' that taper forward and integrate with the front wheelarch and headlight areas very slickly. In being able to integrate a good deal of stylish features without the car looking bitty, the designers should be applauded. Originally designed by Bertone and finished with the help of Fiat's in-house design staff, the achievement is all the more laudable for the fact that the Panda is a five-door car. It's often the case that such small cars look great with three doors but as soon as the stylists try to cram five doors into a short body length, the cohesiveness of the lines go out of the window. Not so with the Panda. The interior design is clearly Fiat, with a high mounted gear lever and a no frills look to the fascia. Although it's obviously built down to a price, like its predecessor this becomes an integral part of the car's charm. Unlike the original Panda, however, you're not in the lap of the Gods if the worst comes to the worst. The current Panda might have shaved a few Euros off the production costs when specifying materials and luxury appointments but Fiat have responsibly insisted that the car is fitted with a decent complement of safety kit. Structural solidity is the first factor in this equation and the Panda features body structures that at first cushion impact and then direct energy away from the rigid passenger compartment. It's also the first car in this class to offer no fewer than six airbags as standard on some models. You can choose no fewer than six airbags if you wish, although driver and passenger airbags are standard on all models. Even the 1.2-litre Dynamic model is fitted with anti lock brakes, and brake assist at no extra cost. You'll find £25,000 executive cars that will require you to tick the options box for some of these features, so to find them in a budget citycar is a testament to Fiat's commitment to safety.

Although some of the internal plastics feel a little insubstantial, the Panda has thus far proved relatively reliable. The engines are largely tried and tested Fiat units that aren't in a particularly high state of tune. Check for off-road damage on the 4x4 and for parking knocks and scrapes on the others. Some owners have reported faulty distributor caps but these should all have been replaced under warranty by now.

(approx based on a Panda 1.2 inc VAT) An alternator is around £85, front brake pads are around £35 for a set, a rear exhaust section should be about £65 and a headlamp is around £70. Expect to pay around £7 for an air filter and about £15 for a fuel filter, about £6 for an oil filter and about £4 for spark plugs.

The 1.1-litre car is not only a fair amount slower than the 1.2-litre model but it's also dirtier and less economical. What price do you put on safety? The 1.1-litre car does without the Dynamic's anti lock brakes with brake assist and you may well rue the consequences of your economy on a typically icy British December morning. It's rare that we go out of our way to dissuade you from a given product and taken in isolation, the Panda 1.1-litre Active is a very competent product, but give Fiat a few extra pounds and you'll be rewarded with a far superior car in the shape of the 1.2-litre Dynamic. Only the most cash-strapped should consider the 1.1-litre model and even then an ex-demonstrator 1.2-litre car would be a more desirable proposition. The 70bhp 1.3-litre Multijet diesel offers reasonable performance with 65.7mpg average fuel consumption. Even around town, you'll see 52.3 mpg while on a longer run the Panda will return an astonishing 76.3mpg. Couple that cruising economy with a 35-litre fuel tank and the Panda has a range of up to 586 miles - amazing for such a small car. Emissions are a paltry 114g/km, making this Panda one of the cleanest cars of its ilk. Whichever Panda you opt for, Fiat have gone to great lengths to instil a big car feel in the Panda and the amount of soundproofing pays dividends. Fiat claim the Panda is the only car in its class to have 99 per cent of its interior surface lined, and this certainly helps both the perception of quality and noise suppression. The Panda will pull from low speeds cleanly and the gearshift is probably the best in the citycar class. The clutch feels like a well engineered item as well, being progressive in its action, making stop/go progress easy to manage. The 'City' button takes all the weight out of the steering system and makes three point turns an exercise in effortless wheel twirling.

The Fiat Panda is undoubtedly one of the better citycar purchases out there and one of the few urban tots that possess a big car feel. The 1.3-litre diesel and the 4x4 are the picks of the bunch, but find any well looked after car with all of the service stamps and you shouldn't be disappointed. 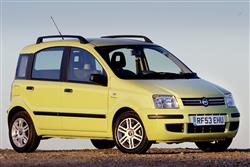