Having been Ford's best selling SUV in the USA, the Blue Oval brand hoped back in 2016 that this Edge model could replicate some of that success in Europe. The idea here was to add a top tier to the Blue Oval's Crossover and SUV line-up that would keep customers within the Ford family who might otherwise desert to other brands. It didn't work, but that doesn't mean that an Edge can't make sense as a used buy. You're most likely to come across the pre-facelifted version of this model, sold between 2016 and 2018, so that's what we're looking at here.

Before the Edge, the last large luxury SUV Ford had attempted to sell here was the Explorer. Launched in 1997, this US market 4x4 was everything European buyers didn't want, weighty, ponderous and petrol-powered. As a result, buyers almost universally ignored the thing and it took nearly two decades before Ford felt brave enough to return to the full-sized SUV sector with this Edge model, launched here in the Summer of 2016. By this time, the company absolutely needed a larger SUV in its line-up to satisfy buyers in this segment wanting something a little larger than the Blue Oval brand's existing small EcoSport and medium-sized Kuga models. Forget the truck-like underpinnings you might expect from a large SUV that sells primarily in the US. This car instead shared its CD4 platform - and much of its interior - with the well-regarded Mondeo, as well as Ford's S-MAX and Galaxy MPVs. That People Carrying provenance is one reason why the Edge is so spacious inside, though curiously, for the European market, Ford didn't use that extra room to build in the third seating row that many family SUV buyers in the SUV 'D'-segment wanted. The original version of this Edge sold until late 2016, when it was replaced by a facelifted model featuring Ford's more efficient EcoBlue diesel engines.

Previous large Ford 4x4s looked very much what they were: SUVs primarily designed for American and Far Eastern markets. This Edge model is a bit different from that, large and imposing but with far more of the kind of European feel needed to take on established rivals this side of the Atlantic. That was further helped by underpinnings very much developed for our side of the pond. Under the skin, the Edge sits on the same 'CD4' platform that Ford uses for the other large models in its passenger car range, the Mondeo and the S-MAX and Galaxy MPVs. Take a seat inside and ahead of you through the leather-trimmed three-spoke multi-function steering wheel, there's a classy, if rather cluttered, instrument cluster that in mid and upper-range models gives you a sophisticated 10-inch TFT set-up made up of various inset multi-function displays. The two outer ones are framed by conventional speedometer and rev counter gauges, with trip computer information on the left and safety functionality depicted on the right. In the middle, you get 'Entertainment', 'Navigation' and 'Phone' options. Anything this set-up can't tell you will probably be covered by the feature that on all models dominates the centre of the dash, the 8-inch SYNC 3 colour touchscreen, there to play its part in reducing button clutter and giving the cabin a cleaner, smarter feel. In the back, as at the front, the doors open wide to make access easy and once you're inside, you'll find massively more space than is provided by mid-sized SUV models at this price point (think RAV4 or CR-V). No other SUV priced remotely close to this one can comfortably seat three adults across the back seat, but such a feat is easily managed by this Ford, aided by a notably low-set central transmission tunnel. To some extent, the reason why it's so spacious in the back is that surprisingly, Ford opted not to add in a third fold-out seating row in the boot. Where the five seat-only approach should pay off is when it comes to boot space, so let's have a look at that. Avoid entry-level trim and you get a power-operated tailgate that can be activated merely by waving your foot beneath the bumper if you happen to be approaching the car laden down with bags. Once it's raised, there is indeed a quite enormous boot. Even if you only fill the space up to the window line, there's room for 602-litres of cargo. Pack it to the roof and you can fit in 800-litres of luggage.

We came across plenty of satisfied Edge customers but there were also a number of rogue examples, with issues that buyers on the used market will need to look out for. One buyer found her car was continually slow in accelerating and had 'hiccups' when being asked to power forward quickly. Another owner reported that his panoramic glass roof had cracked for no apparent reason. Another buyer found the SYNC centre-dash screen go blank. Otherwise, it's just the usual things. Check for signs of off road use. And inspect the alloy wheels closely for signs of kerbing. Make sure that unruly kids haven't scratched the interior plastics. And as usual, check that the service book is fully stamped up to date. Some ex-fleet models may have missed out on garage visits.

On the move, the two turbodiesel engines on offer here do a decent job of propelling the car along and are very much on par with rivals for pace. Both are 2.0-litre TDCi units and only come mated to Ford's Intelligent All-Wheel Drive system. Buyers choose between two mechanical set-ups; a 180PS single turbo variant you have to have with a 6-speed manual gearbox; or the package most original buyers went for, a 210PS twin turbo derivative only offered with 6-speed PowerShift automatic transmission. Handling through the bends isn't as sharp as it would be in a smaller SUV, but the Edge compensates for that with supple suspension and impressive refinement that's aided by a clever 'Active noise control' system that tunes out unwanted noise using sound waves played through the car's stereo speakers. Off the beaten track, as you might expect, the Edge is no Land Rover Discovery but by the more modest mud-plugging standards of other SUVs in this class, it acquits itself very well. A reasonable level of ground clearance - just over 200mm - certainly helps, as does the wheel angle flexibility of the all-independent suspension set-up. This big Ford's 'Intelligent All-Wheel Drive' system is a permanent set-up and, like nearly all its rivals, uses 'Torque On Demand' technology to send power to whichever wheel has the most traction. Most potential buyers will be more interested though, in on-tarmac efficiency - which is surprisingly good for such a relatively heavy car. Expect up to 48.7mpg on the combined cycle and 149g/km of CO2, regardless of which engine and transmission package you choose.

This was more than just another attempt by Ford to sell a big US-made 4x4 over here. Think of this Edge as an S-MAX or Galaxy MPV re-designed for the rough and you'd probably be closer to the mark. But it's more than that too. On prolonged acquaintance, this car reveals itself as a very likeable, capable SUV that might please if you don't need more than five seats and you like plenty of interior space. It's less wieldy and rewarding to drive than other segment contenders at this price point but you do get the standard security of Ford's capable Intelligent AWD system. This model's also very well equipped, smart to look at and media savvy. It is, in short, an SUV that has a bit of an Edge to it. Try one and you'll see what we mean. 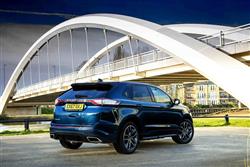 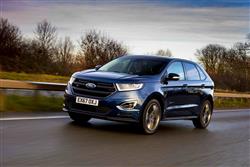 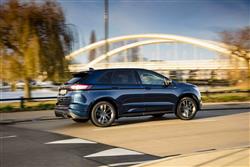 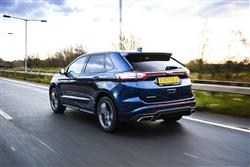 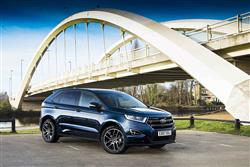 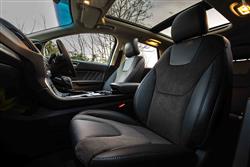