The Ford Focus evolved in third generation guise, then further smartened up its act in the revised MK3 form launched in 2014 - the car we evaluate here as a used buy. The idea was to offer slicker looks, higher interior quality and extra technology. Plus with this re-design, the Focus also delivered greater efficiency beneath the bonnet thanks to the addition of a hi-tech range of 1.5-litre petrol and diesel engines. The best part though, is that this car still remains as rewarding to drive as it's always been. The Focus might have grown up a little in this form, but it certainly hasn't lost its spark.

The problem with success is that it creates an expectation. Whether it's an author looking to repeat the storming sales of a bestselling debut novel or a rock group recording that tricky second album, prolonging success is just as hard as winning it in the first place. Just ask Ford. This improved third generation Focus model, launched in 2015, served as a case study in clinging onto hard-won gains. To understand its significance, we'll need to press the rewind button for a moment and shuttle back to 1997. Ford's family hatch contender during this period was the fifth generation Escort, a car so all-encompassingly woeful that the brand was almost embarrassed to sell it. When the time came for a replacement, we all expected something better. What we got in the Focus model first launched in 1998 was something much, much more than that, a car that, at a stroke, offered arguably the biggest step forward in family car design the market has ever seen. Here at last was technology directed firmly at the man in the street who, in this apparently humble family hatchback, could experience a car more entertaining and rewarding to drive than almost anything this side of a sizeable lottery win. It was asking a lot for the MK2 model we saw in 2005 to repeat such a seismic step forward but that second generation Focus was still quite good enough to remain acclaimed as the driver's choice against rival Astras and Golfs that made up for their dynamic failings with a better ride and a more luxurious big car feel. These were attributes the Focus needed too and when it came to developing the MK3 version, first launched early in 2011, Ford tried to provide them without compromising the car's class-leading handling. Here was a design with plenty to live up to, the brand's first truly global model, offered for sale in over 120 countries and aiming to offer family hatchback buyers the last word in comfort, convenience, eco-friendliness and hi-tech compatibility with the modern world. Lofty ideals that looked credibly realised back in 2011. By 2014 though, the market landscape in the closely-fought family hatchback sector looked somewhat different, the intervening years having seen the launch of impressive new competitors like new generation versions of Peugeot's 308, SEAT's Leon and, most significantly, the Volkswagen Golf. In comparison, the Focus was starting to age a little. Hence the need for the far-reaching package of late-2014 updates that brought us the much improved third generation version of this Ford that we're going to look at here. It was cheaper to run, safer to drive and smarter both to look at and to sit in. It did, in short, promise the kind of significant step forward that was absolutely necessary in retaining Ford's UKs sales leadership in this segment. This car sold until the early Summer of 2018, when it was replaced by an all-new fourth generation model.

We found lots of satisfied Focus customers but inevitably, our survey revealed quite a few issues too. Rattly interiors are quite common, so check on your test drive and re-negotiate if necessary. Another typical faulty is a DAB tuner that doesn't work. Often iPod/phone connectivity ports/systems stop working too, so connect up and try these. One owner complained of an engine misfire which needed a software update. Another found the horn stopped working. Another complained of noisy brakes. Some owners with auto gearboxes weren't happy, reckoning that problems started occurring after around 5,000 miles of use. As for the manuals, well these seem generally fine but one owner found that there was a 'clunk' every time the clutch engaged; another said the gear gaitor kept popping out of its fitting every time he selected reverse. More seriously, in one case, the anti-freeze holder on one Focus drained into the oil sump, leading to a breakdown. Otherwise, you'll just need to look for the usual scratched alloys and evidence of child damage in the back. The cabin plastics mark easily, so check them carefully; this could be grounds for a small price reduction. As usual, check that the service book is fully stamped up to date. Some ex-fleet models may have missed out on garage visits.

This is the world's best selling global nameplate - with good reason. Has any car had more of an impact on modern era motoring than the Ford Focus? With over 12 million global sales on the board, it's hard to argue the point. What we like most about it is that despite the drive towards better efficiency, improved safety, greater practicality and beefier build quality, it remains, underneath it all, the rewarding steer it's always been - an entertainer at heart. We wonder just how many owners will ever discover that? Perhaps it doesn't matter. In this improved post-2014 MK3 form, this car did, after all, no longer depend solely on handling supremacy to justify its position at the top of the sales charts. Smarter and more sensible, it was, more than ever, number one for a reason. 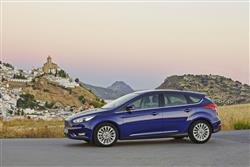 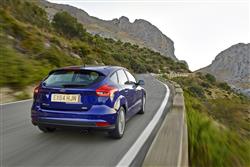 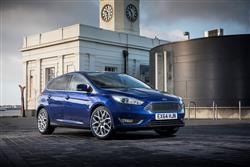 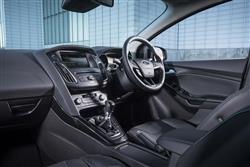 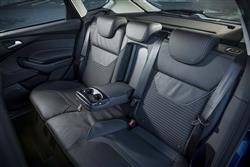 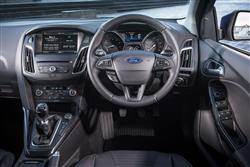