The first generation version of Ford's five-seater C-MAX model was originally supposed to be offered with a seven-seat option but the Blue Oval brand got cold feet at the last minute and kept that car to just a couple of seating rows. It was a bad decision that cost the company plenty of sales in the compact MPV sector, so when the second generation C-MAX range arrived in 2010, it was inevitable that this oversight would be put right. So it proved, a 'Grand C-MAX' variant launched alongside the five-seat ordinary C-MAX variant. It's the Grand model we're going to check out here. Here's what to look out for.

Let's face it, Ford didn't exactly rush to get a seven-seat compact MPV into production. Vauxhall hit upon that winning formula with its seven-seat Zafira way back in 1999 and probably couldn't believe the fact that the Blue Oval let them have an unchallenged eleven year run at the European market for compact seven-seat MPVs. Still, all good things eventually come to an end and the Zafira was suddenly faced with quite the challenge when in 2010, Ford pulled the wraps off its Grand C-MAX. It certainly had the benefit of being able to observe where market trends were going and also how different rivals tackled the problem of packaging seven seats in a modest body length. The Grand C-MAX was spun off the second generation C-MAX platform, arriving in dealerships in October 2010. Buyers chose from either 105 or 125 PS versions of the 1.6i TI-VCT engine or a more powerful 150PS 1.6 Ecoboost petrol. Diesel customers were catered for with a 115PS 1.6-litre TDCi - or a 140PS 2.0-litre TDCi unit that came with the option of the excellent twin-clutch Powershift transmission. The range wasn't too difficult to get a handle on, with just Zetec and Titanium trims on offer, with plusher Titanium X spec subsequently being introduced. Customers were attracted to the upper-spec cars, with 65 per cent going for the Titanium trim and most attracted to the 1.6 TDCi 115PS powerplant. In October 2012, the 1.0-litre Ecoboost petrol engine was introduced to the Grand C-MAX range in 100 and 125PS guises. The range was facelifted in late 2014.

It's a while since we've been surprised by the looks of a Ford product but the 'kinetic design' themes that have been rolled out across the model range are far from unattractive, so we'll forgive the lack of adventure on the part of Blue Oval designers. By the standards set by other compact MPVs, which aren't always the highest, the Grand C-MAX is a handsome devil. Avid Ford watchers will recognise the trapezoidal grille, the swept back headlights and the sharp line around the bonnet and the flanks. The Grand C-MAX is fully 4,520mm long with a wheelbase increased by 140mm compared to the standard car. It's also 40mm taller and these extended dimensions allow it to cram in that third row of seating. The roof line is flatter and the window pillars are thinner to enhance the view out of the Grand C-MAX but the other major difference is that, while the C-MAX has conventional rear doors, the Grand C-MAX employs sliding doors on its flanks. This creates wider apertures for improved access to the rear seats and eliminates the risk of children clouting adjacent cars when they clamber out in the car park. The design inside looks slick. In line with the other modern Fords, there's plenty of metallic detailing and the quality of fit and finish seems high. It's the seats that will provoke the most interest however, as the designers clearly did a lot of work on maximising versatility. In the Grand C-MAX, the sliding side doors mean it's possible to access the third row without sliding or tilting the outer seats in the second row. There's also a clever feature where the centre seat in the second row can collapse under the right hand seat, giving a six-seater layout with walk-through access to the rear. Standard equipment on all models includes alloy wheels, air conditioning, leather steering wheel, a Thatcham category one alarm, a DAB radio/CD system and Bluetooth with USB connectivity and voice control.

All of the engines are tough units and the diesels are especially good, so no major mechanical issues there. The cabins are reasonably hardwearing too, but look for damage in the rear caused by tots. The Grand C-MAX tends not to be driven quite as hard as regular Focus models, but it's still worth keeping an eye out for mega-mileage company hacks that have been given a mileage haircut. Worn carpets, and scuffed trim are the usual clues. Check that all the electrical items work properly, ensure that the air conditioner delivers chilled air soon after the engine is started and remember that there's no excuse for missed servicing, so look for a detailed history.

(approx based on a Grand C-MAX 1.6) As you might expect, parts are plentiful and relatively inexpensive. A clutch assembly will be around £115 and an alternator should be close to £165. Brake pads are around £35 a front set and a replacement headlamp is close to £140. A full exhaust is about £275 and a catalyst is about £285.

There's nothing old fashioned about the Grand C-MAX engine range either, Ford having fitted a collection of leading edge powerplants littered with the kind of technology that the layman has no hope of understanding. There are 1.6-litre Ti-VCT petrol units with independent variable camshaft timing and 1.6-litre EcoBoost SCTi engines that also run on unleaded but also feature a low-inertia turbocharger. The diesels are 1.6 or 2.0-litre in capacity and share Ford's TDCi high pressure common-rail direct injection technology. The EcoBoost units are likely to be the choice of those who want some zip in their driving experience. There are 148bhp and 178bhp versions to consider, the latter producing its 240Nm maximum torque constantly between 1,600 and 4,500rpm. That spells good flexibility and there's even an overboost feature which increase torque to 270Nm for short periods of hard acceleration. The 1.0-litre engines sound great on paper but have frustrated owners by failing to get anywhere close to their published fuel economy figures. Regularly drive a fully-loaded C-MAX and you'll probably prefer the torque of the diesels. Many MPV buyers automatically home in on anything with a diesel engine and with good reason. When the running costs are totted up, oil-burning makes real sense in a family car, provided it's being done by the engine and not the wayward 10-year-old in the third row. The 1.6 TDCI comes in 94bhp and 113bhp forms, with the latter trumping the most powerful petrol engine with its torque output. The real big hitters are the 2.0-litre TDCi units in 138bhp and 161bhp states of tune with up to 340Nm of pulling power available.

The Ford Grand C-MAX might have taken a while to come to the party, but at least Ford took the time to get the product right. There's really not a bad car in the range and everything just works. Remember, Ford had sold the C-MAX for fully seven years when it launched the Grand, so it understood a thing or two about compact MPVs. Lengthening the wheelbase and adding another couple of chairs in the back was the easy bit. Tracking down good used examples of this original 2010 to 2014-era first generation model shouldn't be too tricky. There'll be quite a few cars that'll look a bit tired because family life has been hard on them, but by the same token, it's easy to avoid the neglected ones and the mega-mile company hacks. A well-looked after C-MAX diesel would be our recommendation and if you're in the market, why not look for a bargain 2.0-litre TDCI with the Powershift box? It's a class act. 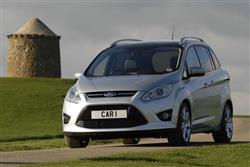 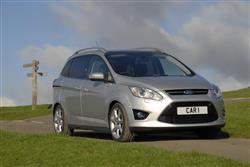 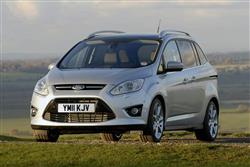 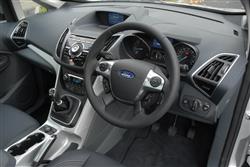