The MK4 Mondeo proved to be a very complete car, bigger, slicker and more refined than its predecessors but still offered primarily in either hatch or estate form. Fourth generation buyers got a car founded on a more advanced platform shared with Ford's Galaxy and S-MAX large MPVs, so the car could be larger. And it was more sophisticated under the bonnet, gaining an entry-level 1.0-litre petrol unit and even a self-charging petrol hybrid engine. It proved to be still very good to drive too, though increasingly in this form, technology, comfort and balance sheet efficiency were more compelling reasons as to why you might want one.

The Mondeo has changed with the times - as have its buyers. 'Mondeo man' is no longer the mascot of New Labour he was in the Nineties, today instead being a far more sophisticated person. He doesn't feel the need to pay extra for a German premium badge on the bonnet of his company car when this Ford is bigger, better equipped, arguably more rewarding to drive and in some ways more technologically advanced. Private customers can see the logic too, but there simply aren't as many of them as they used to be, traditional family folk tempted away by the trendier choices they could make for similar money. In its Kuga Crossover model and its smart S-MAX MPV, Ford also offers some of these options, but at the launch of this MK4 Mondeo in 2014, still maintained that there's a place for this car in its core model line-up. This MK4 Mondeo needed to be very good to justify that faith. Back in 2014, Ford had had an awful long time to get this car right, the previous MK3 generation Mondeo dating all the way back to 2007. The US market got this MK4 design (badged there as the 'Ford Fusion') to replace it back in 2012, but a switch of European production for this car from Genk in Belgium to Valencia in Spain took longer than the brand anticipated and it wasn't until late 2014 that the fourth generation version was finally launched in Europe. Still, it came fully-equipped to take on tough segment rivals like Volkswagen's Passat and Vauxhall's Insignia, claiming class-leadership in efficiency, technology and safety. There was a rejuvenated range of petrol and diesel engines, plus the option of Hybrid power for the first time. A plush top leather-lined 'Vignale' trim level was launched in 2015. This MK4 model sold in its original form until early 2019, when a facelifted version was introduced, complete with minor exterior upgrades, extra safety provision and more frugal EcoBlue diesel engines.

The MK4 Mondeo range was mainly based around hatch and estate body styles. A saloon was also offered, but only with the rare hybrid engine. If there's one thing that's defined Mondeo design over the years, it's that it's become bigger and more up-market with each passing generation. This fourth generation version followed that pattern by emerging from its over-extended period of development as an altogether more expressive and polished proposition than before, whether you choose five-door Hatch or estate body styles. Put either one up alongside its predecessor and this looks a much costlier, more sophisticated thing, with its more prominent Aston Martin-style trapezoidal front grille and sweeping power dome bonnet. Shape and contrast is also a feature of the inviting cabin with its wrap-around symmetrical centre console design delivering a snug, cockpit-like feel. Ford tried hard with fit and finish too, installing a soft-touch instrument panel, a flock-lined central front storage area, chrome touches and smart accents on the air-vents, along with more up-market switchgear. Fortunately not restricted to plusher Mondeo models is the feature that dominates the centre of the dash, the 8-inch SYNC2 colour touchscreen, which plays its part in reducing button clutter and giving the cabin a cleaner, smarter feel. This set-up's divided into four colour-coded sectors that allow you to control audio, sat nav, 'phone and climate control functions via touchscreen buttons. In the rear seat, you'll appreciate the difference this car's larger-than-average shape can make for your passengers. Three big adults across the back seat of an Audi A4 or a BMW 3 Series is a squash that's only slightly improved if you opt for something mainstream like a Vauxhall Insignia or a Volkswagen Passat. Here, it's no problem at all, with superb space for shoulders thanks to the class-leading width of the cabin. Legs and knees are also well catered for thanks to thin front seat backs. And headroom's fine too, unless you're over six foot and in the back of the hatchback version, in which case the sweeping roofline might see you brushing the ceiling, particularly in a car fitted with the optional panorama glass roof. Thanks to its longer roofline, the estate version's a little better in this respect. Out back, you'll notice that the huge - and very heavy - tailgate bisects the light pods, giving a really broad loading bay. It comes right down to bumper level too, so it's relatively easy to get heavy items in and out. Total capacity, as ever, depends upon whether you've got a car with a full-sized spare wheel or the potential roadside hassle of a mini-spare or, even worse, one of those tyre-inflatory 'instant mobility systems'. Do without a spare wheel and as much as 550-litres is on offer in the Hatch model, curiously more in fact, than the 525-litre capacity offered by an estate version in the same configuration.

Most MK4 Mondeo owners we came across in our survey seemed very satisfied, but inevitably there were a few issues with some cars. One owner had to replace drive shafts in a car with only 12,000 miles on the clock. Another had to change the EGR valve when the engine management light came on. Some owners complained that the alloy wheels showed signs of early deterioration. Another car had a software fault. Make sure you check the SYNC2 infotainment screen and Bluetooth functions thoroughly. And look out for signs of child damage in the back. Insist on a fully stamped-up service history as usual.

For most of its customers most of the time, Ford's 'one world' medium range family car proved to be a better bet than ever in this fourth generation guise. A few may rue the fact that in this form, this Mondeo isn't quite the complete entertainer it once was. Throw one around and there's no longer the feeling that you're in a big Focus. But then that's probably quite intentional. Customers in this segment have made it quite clear that now, they want something much more sophisticated than that. Today, a car of this kind must be a far quieter, more luxurious and more technologically-advanced thing. So this Mondeo is. You could pay more than twice as much for something with a prestigious German badge and still fail to match this car's refinement and much of the kind of high-tech kit that really sets this Ford apart from slightly cheaper rivals like Vauxhall's Insignia. And it's certainly a closer match and arguably a more interesting option in this sector than Volkswagen's classy eight generation Passat. In short, this was a model rejuvenated. It's worth your attention. 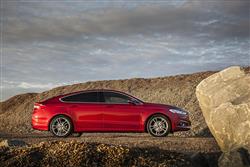 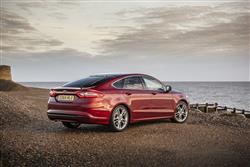 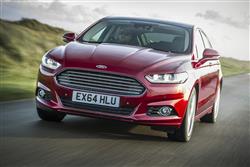 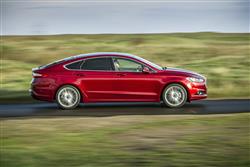 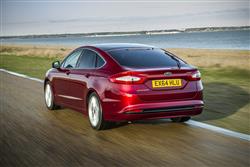 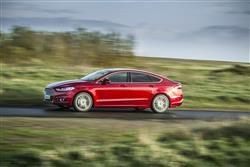