When the fourth generation series of Transit models was introduced in 2013, Ford separated out its Transit offerings in the medium and large LCV segments. The medium sector, going forward from this date, was served by the newly-launched Transit Custom design, while the larger class was addressed by the LCV we look at here, the two-tonne Transit model, the largest design in the Blue Oval brand's commercial vehicle portfolio. Operators may be surprised at this big van's efficiency, but the tough usability it offers will be as familiar to Transit users as ever. It is, in short, a very complete commercial vehicle indeed. And if you were shopping in this segment looking for a large van made in the 2014-2019 period, you'd have to consider it.

Think of a large-ish van and it's a pretty sure bet that you'll be thinking of a Ford's Transit. By 2013, this model line had over 7 million worldwide sales on the board, which made the Transit the Blue Oval brand's third best selling model. So successful has the Transit been across Europe that its very name has almost passed into our language, a byword for van versatility with a history that goes all the way back to 1965. Of the many Transits produced since then, an astonishing 700,000 are still pounding global roads. Not many of these are originals of course, that version facelifted in 1978 before a complete redesign in 1986 was then further updated in 1994. A lot more common though, is the Transit introduced in 2000, one that featured a choice of either front or rear wheel drive for the first time. Ford fundamentally re-styled it in 2006, then added more efficient Euro5 engines four years later. Which brings us up to date and the 2-tonne post-2013 model we're considering here. In that year, it took its place as the largest, the heaviest and the most capable member of a Transit line-up that by then included four completely separate designs covering every segment of the light commercial vehicle market. These ranged from the small Transit Courier through the compact-yet-spacious Transit Connect to the medium-sized Transit Custom model that freed this flagship 2-tonne version up to focus on really large loads. This 2-tonne top Transit was 11% more spacious than the biggest version of previous generation model, which made it big enough to be the first large Transit to be sold in North America. With this design, Ford promised operators best-in-class efficiency, significantly reduced maintenance and repair costs, exceptional driveability and smart load space features. This LCV sold in its original post-2013 form until mid-2019, when it was significantly updated. It's the 2013-2019 versions of this model we check out here from a used buyer's perspective.

It might help to understand the styling of this post-2013 two-tonne Transit if we tell you that it was the first Transit model to be sold in the USA, replacing the aging Ford E-Series. Hence the adoption of the more striking, contemporary front end that featured on this design, with its high-tech headlamps, a look featuring plenty of the Blue Oval brand's 'Kinetic Design' cues. Deep rubbing strips extend their protection to the rear wheel arches so as to lessen the risk of the sides collecting minor scrapes. And the indicators are now prominently displayed on the wing mirrors, though urban users might fear the way that makes them more prone to damage. Inside, build quality from the Turkish factory seems strong and was here blended with much more of a car-like ambience than was the case with this model's predecessor. There's a much smarter instrument panel than that previous design offered, along with plusher trim and materials than you'd expect from a van. As for the cargo bay, well the different roof heights, along with your selection between short, medium and long wheelbases, will also of course determine your load space volume. Go for a typical H2 Medium Roof panel van variant for instance and you get 10.0m3 of capacity with a L2 Short wheelbase version - or 11.5m3 with the L3 Medium wheelbase variant. If you're likely to be transporting bigger loads regularly though, you'll probably be more interested in the H3 High Roof body shape. Here, you can expect 11.2m3 with the L2 Short wheelbase and 13.0m3 with the L3 Medium wheelbase. The biggest van of the bunch is the huge 'Jumbo' version, which uses that H3 High Roof and mates it with the L4 Long wheelbase to deliver as much as 15.1m3 of load volume.

This Transit generally has a strong reliability record, but our ownership survey did throw up a few issues to look out for. The interior isn't the last word in sophistication but it is hardwearing. Check for damage to locks, tired rear suspension, rogered clutches and brakes and make sure that the load bay tie-downs aren't bent or broken. Ply lined vans don't suffer so greatly from dents and scrapes on their side walls as they're being loaded and unloaded. As usual, look for a full service history, with vehicles as recent as this post-2013-era two-tonne Transit, there's little excuse for skipped servicing or scrimping on maintenance. Look out for rusting rear door hinges and check the outer CV joint rubber boot covers for splits. They wear and if they let water in, the CV joints will wear quickly. Flickering or dimming lights might indicate a problem with the electrics. Test the brake, front and fog lamps as well as the indicators. Check the tyres for wear or sidewall damage. If there are signs of uneven wear, it could mean that the tracking has been knocked out and damaged sidewalls or wheels also signal abuse. Check the clutch for slip or judder by rolling away in second with low revs. If there's any evidence of it then negotiate a discount, or have a new one fitted before buying. On higher mileage examples, check whether the timing belt has been replaced. It ought to have been done every 60,000 miles or four years, whichever is sooner. Listen out for any rumbling or drone from the wheel bearings when test driving. Be sure to run the van at everything from town speeds to dual carriageway speeds. A new wheel bearing, fitted will cost around £150. Check how the vehicle you're looking at has been used - and don't be too afraid of higher mileage examples. A 40,000 mile Transit doing short drop town driving might be in rougher condition mechanically than a 100,000+ mile example that's spent most of its time travelling on motorways. Finally, have a good look around the cabin for any water ingress; lift carpets, look under the seats and check under floor mats. Check that any drainage holes around the windscreen front firewall aren't blocked.

Under the bonnet, the range is based around one engine, a 2.2-litre TDCi Duratorq unit developed in conjunction with Peugeot Citroen which can operate with a clever Auto-Stop-Start system and is offered in three states of tune for front-wheel drive customers - with either 100, 125 or 155PS. You don't buy any van prioritising ride and handling but with Ford's strong reputation in this department when it comes to passenger vehicles, then it's fair to expect this Transit Connect to dynamically, be one of the class leaders in the light van segment from the 2013-2019 period. Which broadly, it is. Like any LCV, it handles better fully loaded, but even in an unladen state, cornering is predictable and body roll well controlled. Once you've dropped off your load, you could even imagine rather enjoying yourself on the way home around the twisty stuff in one of these. To a point. You'll find it even better if you choose a Transit specified with rear-wheel drive, rather than the usual front-driven layout. Not that that's why customers of this Ford typically opt for rear-wheel drive: superior grip when heavily laden is just one of the reasons why this configuration can handle heavier payloads and tow more easily, hauling a braked trailer of up to 2800kgs in most guises. So easily will it do so in fact that for many, the All-wheel drive system also developed to run with this Transit platform is not really needed.

This post-2013 two-tonne Transit was Ford's first truly global large Transit model, selling in 118 markets across six continents. More importantly, it proved to be a definitive choice in its segment. True, it may not be the very largest or most powerful choice you could make from the large van segment in the 2013-2019 era, but in terms of efficiency, technology and day-to-day usability, it's a segment benchmark in a way that its predecessors never were. But then those predecessors had to be virtually all things to virtually all businesses looking for a reasonably large van. This time round, since the introduction of the slightly smaller Transit Custom model line-up to suit the market for medium-sized LCVs, this, the largest Transit design, is free to focus solely on those wanting a really big van. And it is big. The US-style front end suggests that and the loading bay, with volume increases over the previous model of up to 11%, confirms the fact. It all meant that at last, Ford's ultimate load carrier could claim to be No.1 for a reason. Which in turn makes it a large van you can't afford not to consider. 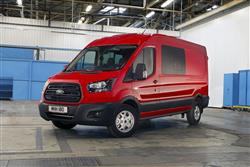 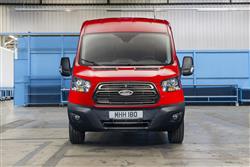 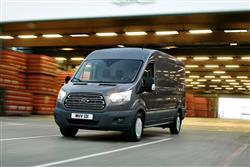 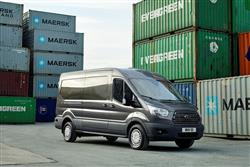 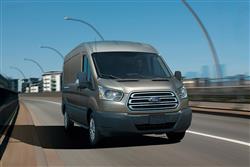